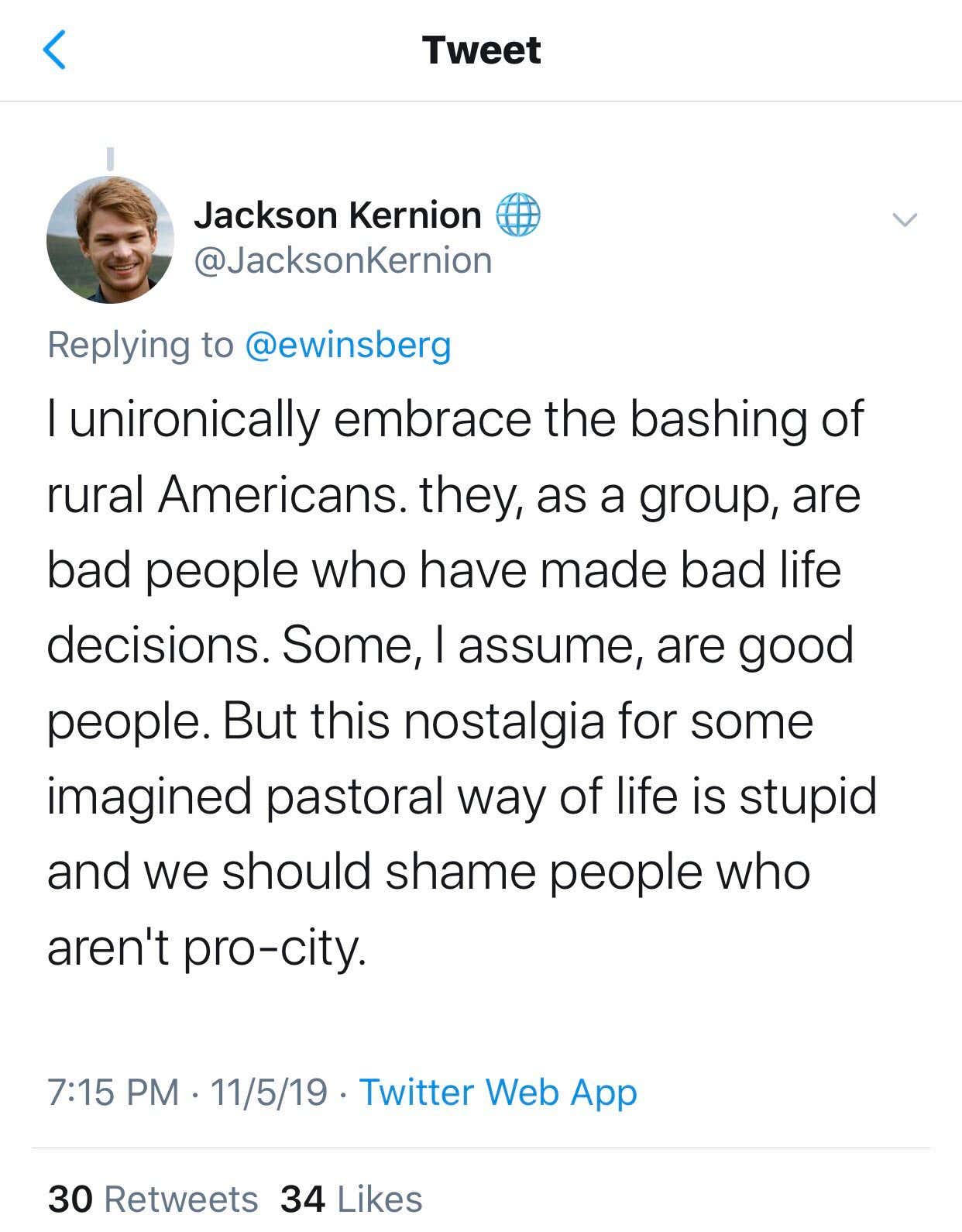 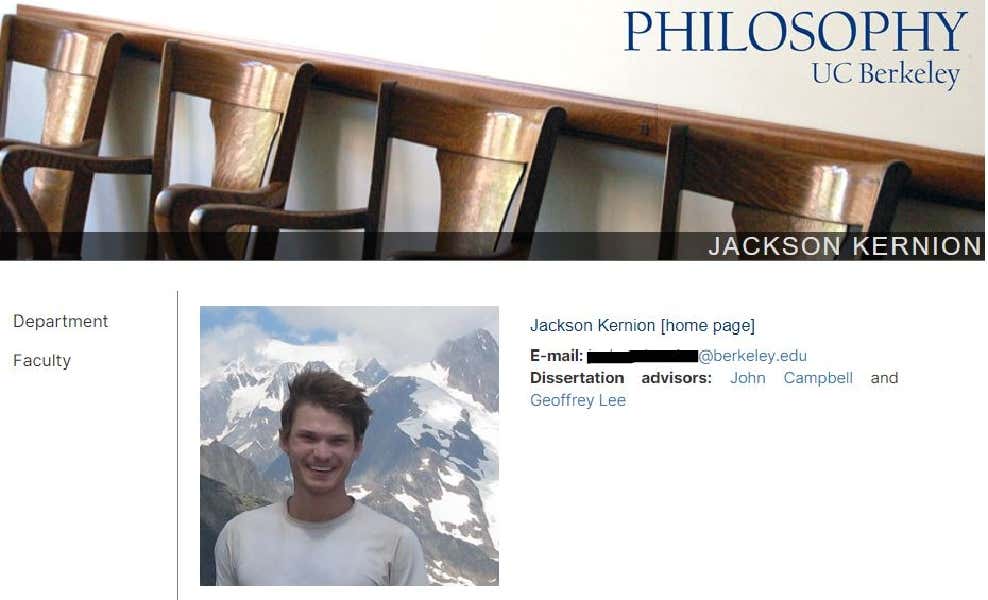 Source - A man who identifies himself as an instructor at the University of California-Berkeley publicly proclaimed Wednesday that Americans who live in rural areas are “bad people” who deserve “uncomfortable” lives.

Jackson Kernion, who describes himself as a Graduate Student Instructor at Berkeley, having taught at least 11 philosophy courses at the university since 2013, took to Twitter Wednesday to explain the academic reasoning behind his distaste for people from rural America, calling those who live in rural areas “bad people who have made bad life decisions.” ...

He argued that promoting a need for “affordable rural healthcare” is equivalent to arguing for rural Americans “to be subsidized by those who choose a more efficient way of life.”

Kernion tried to justify his statements with economic arguments about not making rural life “*artificially* cheaper,” but quickly devolved into personal attacks against rural and not “pro-city” Americans.

“I unironically embrace the bashing of rural Americans. They, as a group, are bad people who have made bad life decisions. Some, I assume are good people. But this nostalgia for some imagined pastoral way of life is stupid and we should shame people who aren’t pro-city,” he wrote in a since-deleted tweet.

After receiving backlash for his comments, Kernion issued a pseudo-apology for the “tone” of his tweet.

Well there you have it, all you hicks, country folk and shit-kicking hillbillies. Thank God we've got Professor Jackson Kernion to settle your hash. To call you out for being such a drain on decent, hard working urban dwellers. You with all your space, greenery and clean air. It's long past time you take the dog back behind the barn to eat a shotgun, pile your four generations into the pickup truck and move to Berk-e-ley. California, that is. Swimming pools. Movie stars. Philosophy professors.

The thing I like best when people like Prof. Kernion talk is not just the blatant, undisguised contempt they have for their inferiors. It's their logic. Let a sanctimonious prick like this guy talk uninterrupted and he won't get more than four sentences before he identifies some group he deems incorrigible for not being as enlightened an understanding as him. Midwesterners are all ignorant Bible thumpers. Everyone from the South is backwards. West Virginians are inbred. Texans are gun-toting cowboys.  And we should hate them all because they reduce large groups of people to stereotypes. All of them! Without the irony of it ever dawning on his way more scholarly, highly educated big brain.

Reading this reminded me of something I heard once about Truman Capote. The author of "In Cold Blood" and some other great works was - and I don't think I'm at all disparaging the man when I use the term - an effete intellectual. There's a reason Phillip Seymour Hoffman got an Oscar nomination for portraying him, because this was exactly his personality and mannerisms:

And unsurprisingly, he mostly hung out in the circles with other literati. Except in his romantic and sexual life, when he preferred what used to be called "the rough trade." Manly, physical, blue collar men.

Well the story goes that he was at a dinner party with a lot of his intelligentsia types, and his date was in the HVAC business. It might have been in England, but don't quote me on that. Anyway the other guests were playing social games, subtly tooling on Capote's date in a way that wasn't obvious to the guy. Making references that went over his head and joking about him behind his back. Until ...

Until the air conditioning went out. Then he became the most important man in the house. Because all their ways with words and social norms in their sheltered existence didn't mean jack squat when the temperature was about to hit 90. Then they needed a guy who knows how to actually do things.

That's exactly the situation with Kernion vs. his contemptible rural folk. If you need someone who knows agriculture, how to fix things, how to maintain a house, pull off a DIY project or keep an engine running, you call them. If you need someone who can deliver a lecture on Kierkegaard, you call him. The difference is, we need all those first things I listed. And never need the last one. And besides, any of the rural people he detests so much could figure out how to teach philosophy.

And I say this as a suburban American, who's not actually pro-city or pro-country. But I do know that I rely on rural people a lot more than I do UCB philosophy professors. And based on those profile photos, if we ever needed Jackson Kernion to produce our food and pump our fuel sources out of the ground, we'd all die, starved and frozen to death, in a matter of weeks. So my philosophy is that he can fuck right off.