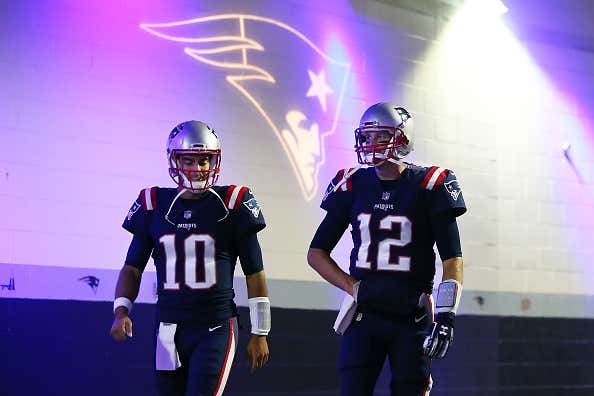 I have to admit that I’m still in a really weird place when it comes to Jimmy Garoppolo. And last night’s Game of the Year for 2019 (so far) is a prime example of why.

Jimmy G is one of those people of whom you can honestly say they’re impossible not to like. He’s talented. He’s incredibly handsome. He’s a competitor. He’s attractive. He’s hard working. He’s good looking. He came from a small school where all his highlights looked like your local news covering the Thanksgiving Day high school game to make himself into a legitimate NFL starter. And he’s easy on the eyes.

Not to mention, even if I’m being the most partisan Masshole imaginable, he left under the best circumstances. There was no messy breakup or harsh words exchanged. The Patriots sat him down for the “It’s not you, it’s us” talk, fixed him up with someone Bill Belichick respects, said “Let’s still be friends” and meant it. So there’s no unfinished business or ill will of any kind.

And yet I can’t help it if a very human part of me wants to see Garoppolo – fail is too strong a word – not succeed. For him to do well, just not too well. Which is why watching Seattle win last night and end San Fran’s perfect season was oddly satisfying. And why I enjoyed waking up to articles like this:

Monday night’s game was played in a playoff-like atmosphere, with playoff-like intensity from the players. Yet we still don’t know how Garoppolo, 28, will fare in these games in January. … [T]he pressing question at the moment, especially in light of Monday’s home loss, is how far he can take the 49ers in the playoffs. This will linger, especially after one of the biggest differences between the 49ers and Seahawks on Monday proved to be the quarterbacks.

And the sick thing is it has nothing at all to do with anything Garoppolo has done or said. It’s been the reaction around New England to the trade that sent him to San Francisco two fucking years ago. It’s still being debated, as if somehow the Patriots didn’t make the right decision on that. You’d think that given everything that’s transpired in the 741 days since that the issue would be settled science by now. But you’d be underestimating the ability of New Englanders to talk nonsense when it comes to this team.

No lie, over the weekend I did a book talk (the holidays are coming up, kids! Buy two for everyone on your list!)  and in the Q&A someone asked me if, given the fact the 49ers were undefeated, the Pats “regret” the trade. On an almost daily basis on Boston sports radio, they repeat the false narrative that Belichick was dragged down to Mr. Kraft’s basement by dark-suited goons in aviators, handcuffed to a leaky pipe and tortured with jumper cables until he agreed to get John Lynch on the phone and make the deal. And I will never get over the Sports Hub afternoon show casually referring to Garoppolo as “the next Joe Montana.”

Complain about the return they got on the deal all you want. That’s a legitimate discussion. Though good luck trying to figure out in the long run what actual picks they ended up with for that original 2nd rounder they got because that draft capital has been money-laundered a hundred times over.

But three things are indisputable:

1) The Pats could only keep Garappolo by making him their starter after that 2017 season.

2) They would not have been to the last three Super Bowls and won two if they’d made that switch.

3) Tom Brady is a better quarterback than Jimmy G. Still.

The second is even simpler math. Since that trade, Tom Brady has led his team to a postseason record of 8-1. He came from 25 points behind in a Super Bowl. He threw for 505 yards with 3 TDs and a 115.4 Passer Rating in a losing effort, threw for 180 yards in the 4th quarter and overtime at Kansas City in the AFC championship game and won another Super Bowl. And if you just take those three Super Bowls since the Garoppolo trade and ignore his previous six appearances, Brady would still hold the all time record for Super Bowl passing yards in a career, with 1,233. (Kurt Warner is second with 1,142, followed by Montana with 1,142 in four games, and John Elway with 1,128 in five games.) [h/t @footballfacts]

As to that third point, the numbers speak for themselves. With massive amounts of turnover at the wide receiver position, without an effective running game this year or a tight end like George Kittle, Brady has put up numbers that are as good or better at age 42 than Garoppolo has at 28.

That’s a statistically negligible difference in Passer Rating on a great many more Attempts, with the same number of Touchdowns and fewer Interceptions with identical Yards Per Attempt and Adjusted Yards Per Attempt.

As far as analytics, Pro Football Focus has Brady ranked as their 7th highest graded QB overall and Garoppolo 19th. And on Deep Balls, defined as passes that travel 20+ yards in the air, again the young buck has been matched by the old GOAT as far as efficiency, but with way more attempts:

How these two will compare next year, or the year after or when Garoppolo reaches his 30s, remains to be seen. But there’s no debating that Brady has been better, was recently better, and is better now. And will inspire a million times more confidence when it counts most, in January and (hopefully) February.

Again, I don’t want to root against Garoppolo. I want to pull for him. But even more so, I can’t help but root for the utter failure and humiliation of the people who claim the Patriots should’ve kept him. That I do not apologize for.