I don’t know who originally said it —probably an 18th century poet who ended up dying of the common cold two days later—but it’s the mantra I’ve been living by for most of my adult years. Whether I was deciding which stay-at-home mom to anonymously torment on Craigslist or which loud-mouth douchebag to completely avoid on campus, it helped shape me into the successful cyber warrior I am today. It’s the same line of thinking that prompted me to strategically pick feuds with horse girls from Missouri and lip syncers from Jefferson Elementary School. Feuds I knew that, statistically, I had a none percent chance of losing.

What I didn’t take into consideration in 2014 is that one day, one of those twelve-year-old twigs would potentially grow older, hit puberty, gain confidence, and challenge my integrity. 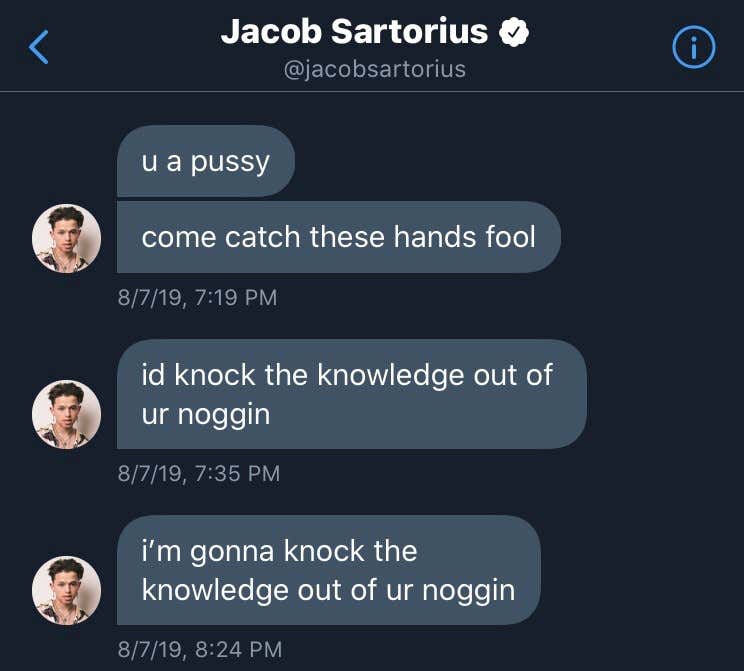 Other than the fact that I’d been consistently harassing him on Twitter for a third of his life, what could have possibly provoked this young lad to abruptly and aggressively lash out at me like this? Was it drugs? A publicity stunt? Years of pent-up rage finally erupting? 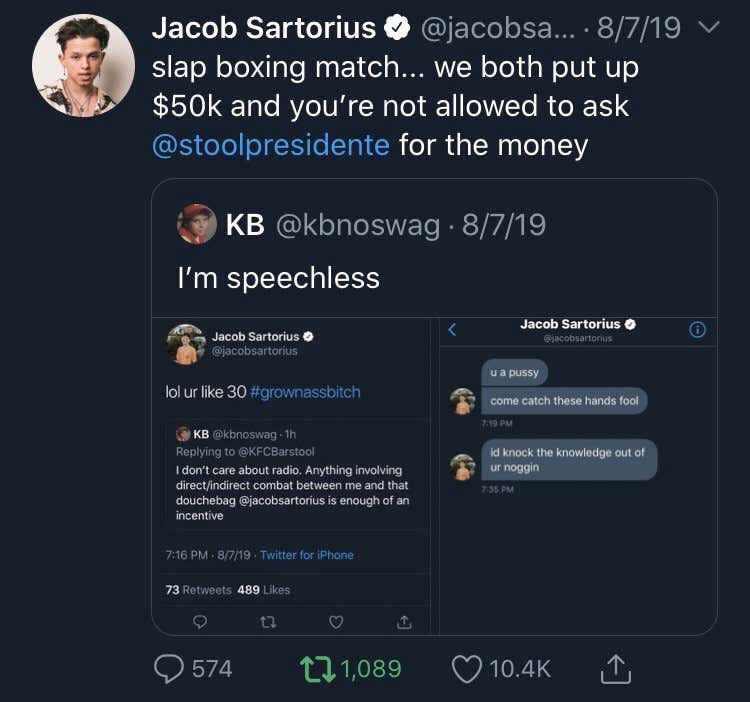 I don’t know the reasons, but ever since I was infamously threatened by my long-time arch rival three months ago, it seems as if he’s only been behaving more and more erratically.

And the more I talked shit on him, the more he put my sweet brain into an Auntie Anne’s cinnamon sugar pretzel. 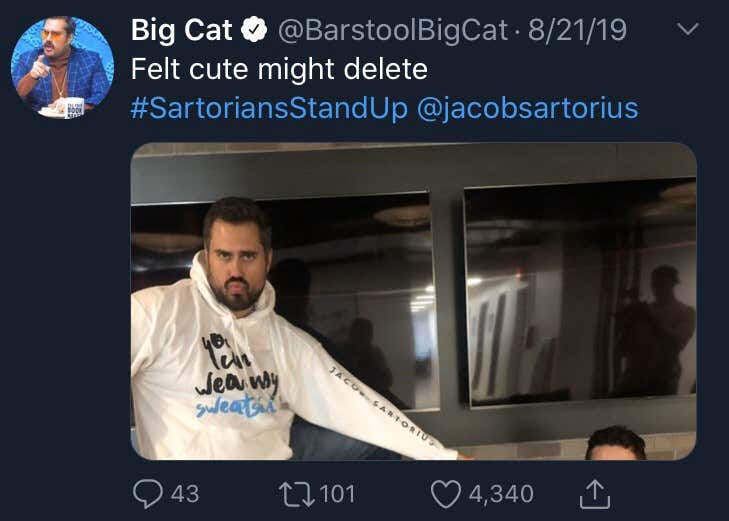 On August 21st, Big Cat ended up next to me in this picture on Twitter. 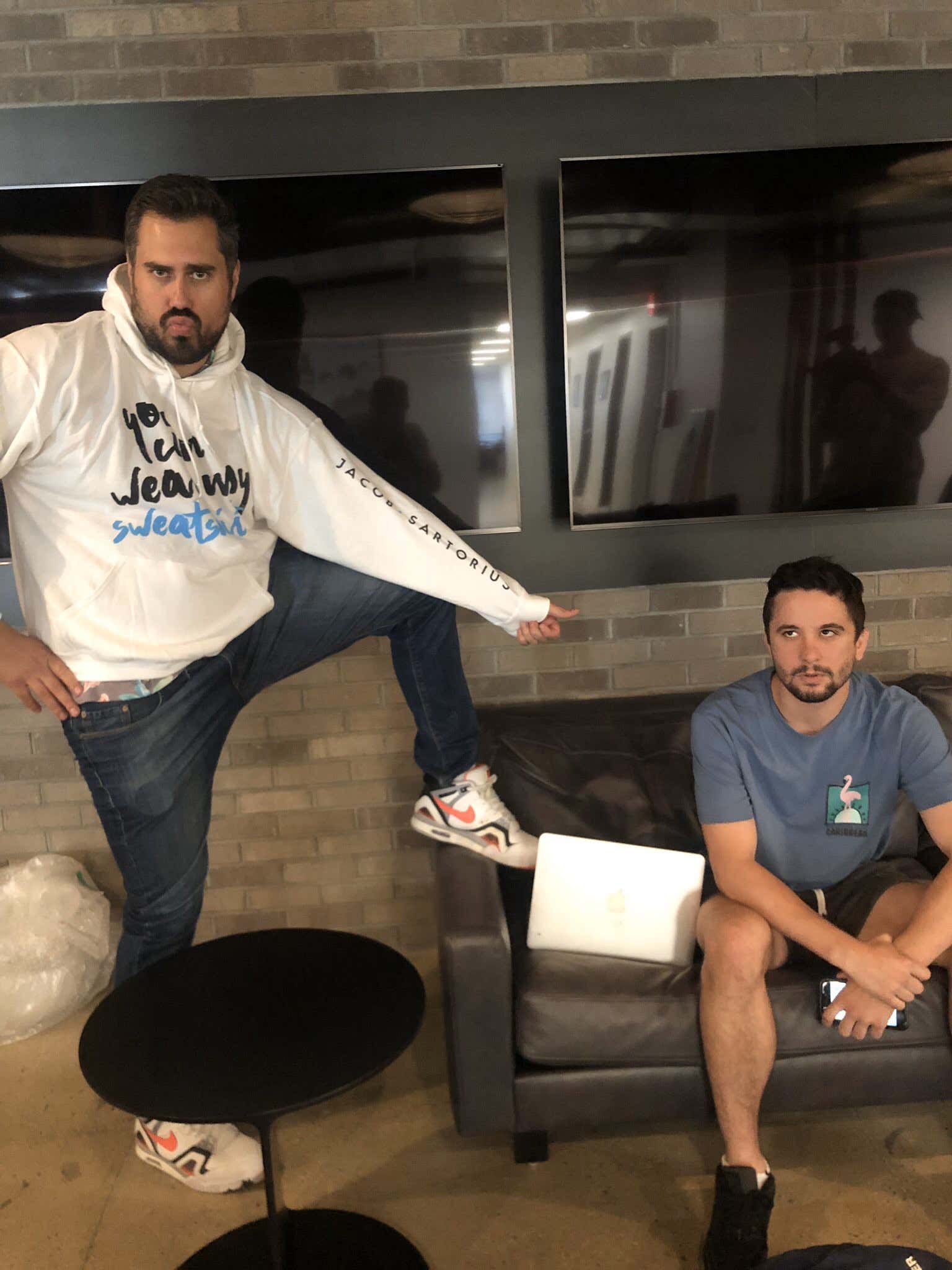 The following day, this:

And the next day, this:

At that point, I wasn’t sure that this child necessarily wanted to beat my ass. But in retrospect, tricking your mortal enemy into thinking you have a crush on him is the perfect tactic to gain the upper hand on him. I dismissed him as a reverse-pedophiliac creep and became overly comfortable and lazy. Bi-monthly trips to Planet Fitness became less and less frequent, and that whole time Jacob was actually dedicating his life to fucking me up in front of a live audience. How do I know this?

For starters, he turned 17.

You don’t just turn 17 shortly after challenging your adult nemesis to a sanctioned fight unless you’re planning to a start a year-long training regiment to defeat him by the time you’re of legal age. 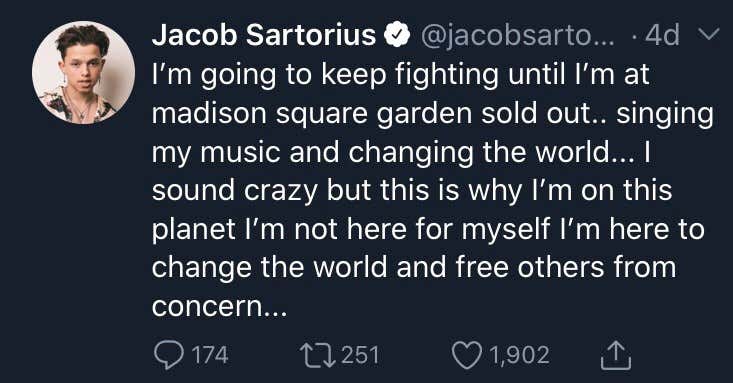 He lost me at “sold out.. singing my music” with this one, but up until then it’s clear that this lip-syncing lymph node was calling me out specifically. Keep fighting? That would imply that he’s been sparring or doing some kind of combat. Madison Square Garden? The same arena that’s a mere two blocks from where I live and work? 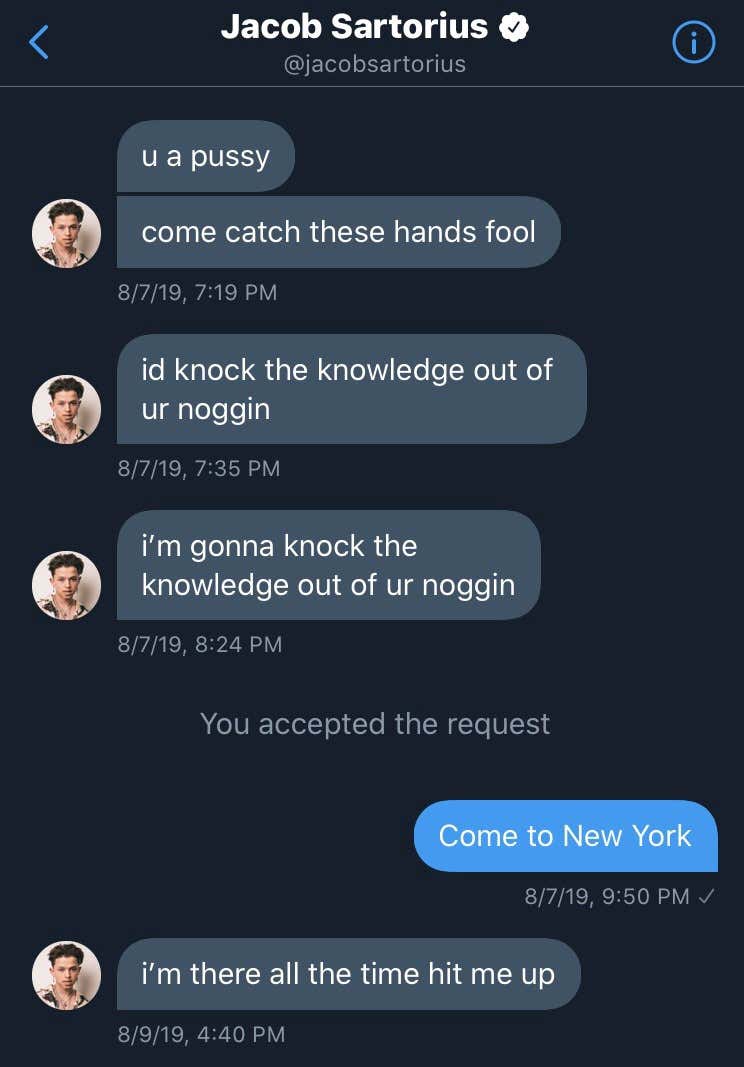 So was this rascal actually striving to knock me out cold on my home turf, or was this all just a silly facade? It’s a mystery that was plaguing my mind for weeks. Until yesterday, when a photo surfaced that confirmed my suspicions once and for all. 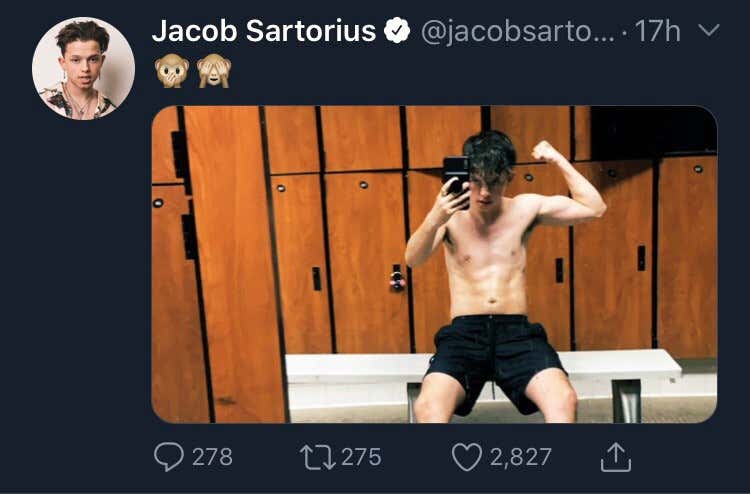 Jacob Sartorius is, in fact, specifically training to beat me the living shit out of me in a fight. And I’d be lying if I said the knowledge in my noggin didn’t gasp when it processed this tweet. I don’t think I can legally examine the photo for longer than a split second, but it seems as if he’s made clear progress since the last time one of his shirtless mirror pics terrorized my timeline. Which makes me think: In the hypothetical scenario that we did fight a year from now, who would have the advantage?

These days, I’m repugnantly out of shape. I start huffing and puffing when I walk up a flight of stairs or mix whippets with weed. I tried running on a treadmill the other day and immediately got off after only a few seconds of being out of breath. My attempt at autoerotic asphyxiation had the same result. Point is, my stamina is fucking garbage. 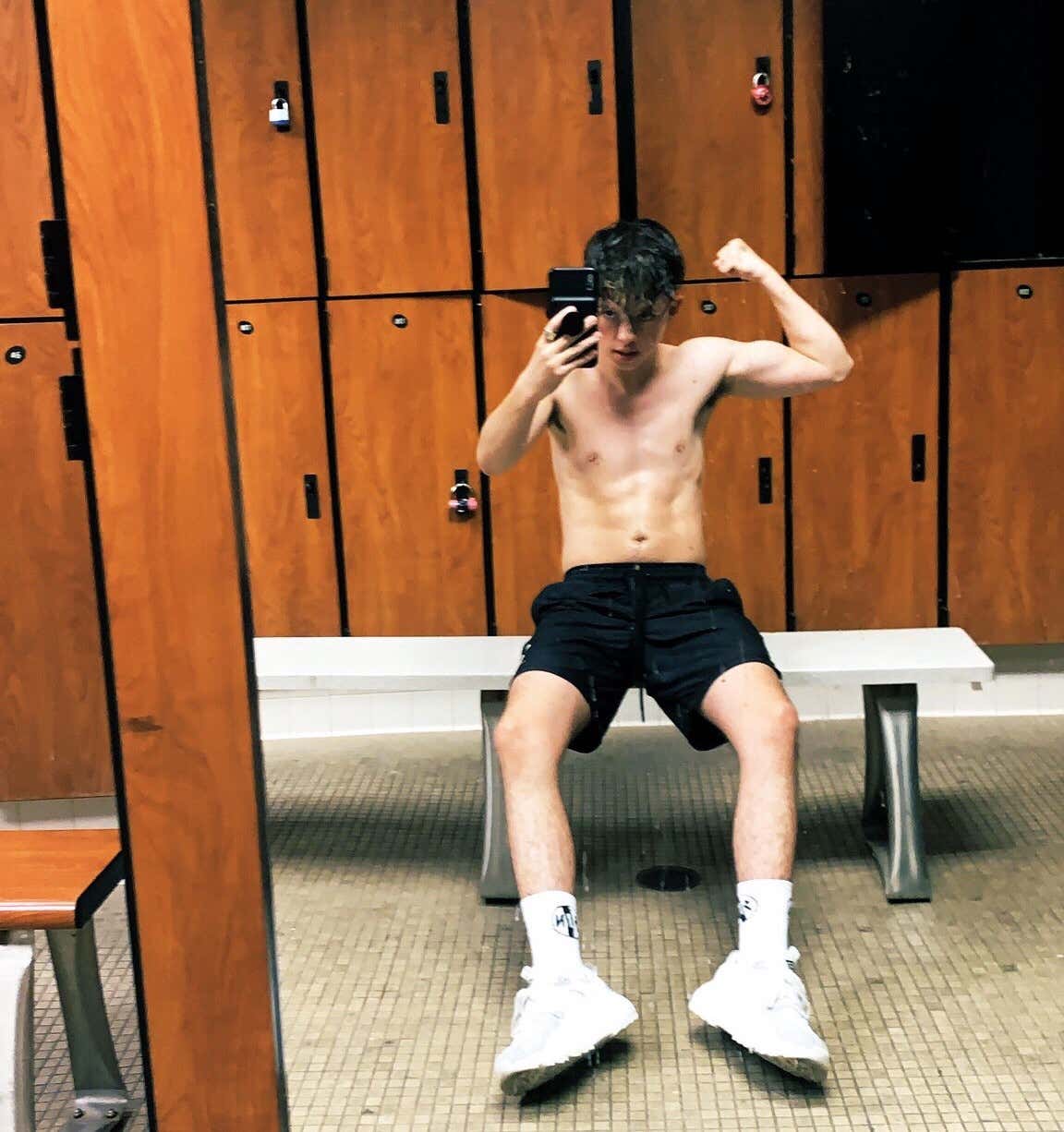 I don’t know what kind of training regiment this malnourished Sycamore branch is on. He might be jazzercising to The Emoji Movie soundtrack for all I know. He also might be doing Olympic-level cardio sessions with world-class trainers. Regardless, it’s way more than I’m doing or planning on doing in 2020.

I’m a realist. I don’t buy Powerball tickets because I know that no matter how many I purchase, I won’t ever win. And I don’t lift weights because I know that no matter how strong or muscular I get, women aren’t going to wanna fuck me any more than they already don’t. At 26, why else would I put myself through such a strenuous activity on a regular basis? I’m not an athlete, my job doesn’t require me to possess any form of physical strength, and I have no short or long-term goals that involve being stronger, healthier, or alive.

I’m also a realist in the sense that I know that no matter how many fun-sized Nestlé push-ups or crunches he does, he’s not going to be stronger than a trained combatant and former physical specimen like me. Not in just a year’s time. When you have the genetics and physique of a flamingo with a neuromuscular disorder, it’s hard to make discernible changes to your body.

As a 17-year-old millionaire who’s been on world tours and starred in critically acclaimed TikToks, he’s kind of like a combination of Drake and Leonardo DiCaprio, in the sense that he hooks up with the same girls as them. While I experienced niche success in the erotica genre of Vine and prevailed in front of a booming crowd of high school wrestling fa-family members at the sixth largest arena in the state of West Virginia, Jacob has managed to garner millions of followers and "perform" in front of sold-out venues across the globe.

Unlike me, Rolfington actually has a legitimate fan base, albeit an embryonic one. If even a small fraction of their mothers bring them to our fight without accidentally dropping or miscarrying them, then he’ll have the clear home court advantage.

So can Rolf “Jacob” Sartorius realistically beat my ass? The short answer is “no” and the long answer is probably also “no,” but in Mandarin Chinese or whatever language has the thickest letters. A year from now, though? When he’s an adult? At the rate I’m going and the rate he’s going, barring I join the 27 Club, I’d be willing to bet that he could absolutely take me in a fight.