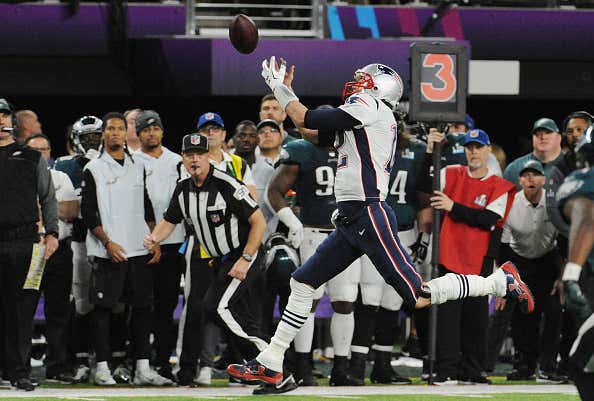 Tom Brady did his weekly spot on WEEI this morning. And with the Patriots getting ready for Philadelphia this Sunday, he was asked if he'd gotten over losing to the Eagles in Super Bowl LII. He couldn't have come up with a more pitch-perfect answer if he had an obsessed, middle aged, Bradysexual professional writer ghostwriting it for him. Which is an offer that's very much on the table if anyone's asking:

“You assume I’m over it? Come on now. That’s a lot of mental scar tissue from that year. That was a tough game.

“In a lot of ways we learned from that year and we came back stronger the next year. We won the Super Bowl in ’18. I think everything is a matter of perspective and when you play in that game and you play great teams, you’re not going to win them all. This is not the Harlem Globetrotters vs. the Washington Generals. This is all about tough competition against the best teams. They deserved it that year, and now a couple years later we get a chance to play the organization again.... Huge game for us. Big game for them. The better team is going to win.”

I get that this'll be spun about how he still resents Belichick for benching Malcolm Butler or something. But I'm not buying it. Or the appallingly negative worldview it would require to think that way.

No, I take this as a pure good. As a sign that a man who has every right and reason to feel satisfied with his accomplishments still obsesses over his missed opportunities. That he's driven by the fact he's the best there has ever been, and yet somehow that is not good enough. And that Sunday afternoon is a vengeance game.

If you took a million athletes who were in a losing effort despite putting up a performance like Brady's:

… despite not having his best receiver, then 999,999 would take it. They'd be philosophical about the defeat and tell themselves it's a team game and they did all they could. Brady is that lone exception. He could chalk it up to the fact his defense put on one of the all time terrible performances. That the Eagles had 10 total drives, one that ended on an interception, another on a punt and the other eight all produced scores. He could justify losing by blaming his kicker, who missed a 35-yard field goal and an extra point. He could blame the officials, the way other officials have:

… but that is not Tom Brady's way. It's his nature to take responsibility. To believe he could have and should have done better, despite a record-setting performance that may never be equaled by anyone.

That's how you get to be the best. That approach. That mental toughness. Along with, as Chris Canty told the Surf & Turf guys last week, unmatched physical toughness. Maybe my favorite clip of 2019 so far:

It's that approach that separates the men from the boys, and the GOATs from the men. I couldn't be happier the schedule is playing out such that Brady gets a revenge game right after losing a bad one to the Ravens. The Patriots by a 100.