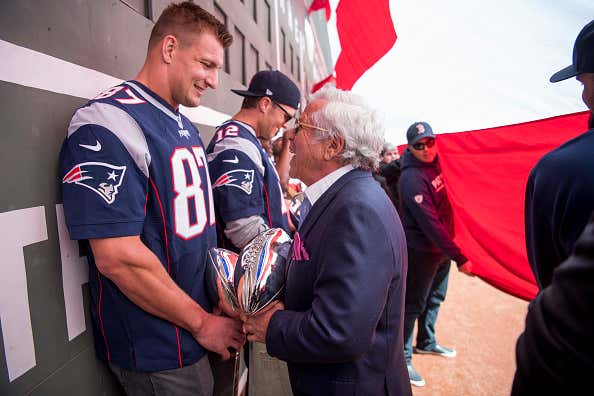 We're now almost eight months removed from that Sunday afternoon in March when Rob Gronkowski announced he was retiring. Make that eight months, nine games, and from the entire Patriots tight end "depth" chart (we need a different term), 18 receptions, 242 yards and one touchdown ago. And about 30,000 or so articles speculating about whether Gronk was considering unretiring to rejoin an offense that needs him right now like women over the age of 40 need Hallmark Channel Christmas movies.

Believe me, I know. I've written most of them. Combing through his social media posts like Nicholas Cage in "National Treasure," trying to interpret his meanings, decipher his clues and separate fact from his blatant ads for his CDB business. And here we find ourselves, 20 days out from the last available date he can declare himself eligible to contribute this season. Gronk still hasn't handed in his retirement papers. Hasn't burned any bridges. And, according to the latest from Ian Rapoport, more than welcome to come back:

When Gronk was at his locker inside Gillette Stadium removing his personal belongings for perhaps the last time ... [o]wner Robert Kraft walked up to him to say goodbye. According to sources, Kraft delivered a clear and concise message that would resonate for months.

Kraft told Gronkowski that he wants him to return for November, December, and a playoff run. If that happened, the team not only would welcome him back but would remain hopeful that it happen. ...

One person who has recently communicated with Gronkowski said he has shown no signs of coming back to play.

In public comments since August, Gronkowski has remained consistent that the door is open for a return, though his body would have to feel right to do it. He also has lost some weight and would need to gradually build back up to his playing weight. He said that process would take about a month. ...

That is exactly what Kraft is hoping for.

I've been all over the map on this. It's fortune telling. Trying to communicate with the spirit world. I might as well have a Ouija board and try to talk to Gronk that way, but you know the pointer would just slide back and forth between "6" and "9" and spell "hahaha," and be a waste of everyone's time. I've had the Gronk Unretirement Probability Meter as low as 10% and as high as 75%. And as of late, I've been pretty much ignoring it and moving on with our lives and the season. But it's hard to ignore the timing of this report. Someone put a bug in Rapoport's ear on this, and it's not a coincidence. If Gronkowski is going to seriously get back into condition to beat double teams from the Ravens defense in January, the time to start is five minutes ago.

I'm no longer optimistic he's coming back. But at this point I'll take him in any shape, form or manner I can get him. I'll fight any man who says Bill Belichick hasn't been by far the best GM in sports history over the last 20 years. But I've never claimed he's infallible. And the tight end position has been an abject failure this season. Especially considering how vital it is to the Erhardt-Perkins scheme they've been running this whole time. Particularly in the hands of Josh McDaniels. The fact they didn't address it in the draft, couldn't land Adam Humphries or even a Tyler Eifert at the trading deadline and have had to settle for a 38-year-old Ben Watson and have no blocking from the position to speak of, is a situation bordering on neglect. It could cost them a championship. And any form of Rob Gronkowski, even a shadow of himself, could put the 2019 Patriots completely out of their competition's reach. So here's hoping Mr. Kraft's emotional (and financial) appeal works.Our nation turns its lonely eyes to Gronk.