Look I don't care how embarrassing it was yesterday when we had one million tries from the goal line and couldn't get any points, or when we went 5 wide and gave up a safety in a 9-7 game, or when our dumb head coach wanted to go for it instead of kicking a field goal to take the lead, or when Baker Mayfield tried to quiet a crowd that was booing / Bills fans. At the end of the day, that was a HUGE win against a 6-2 football team and I went to bed last night thinking PLAYOFFS. 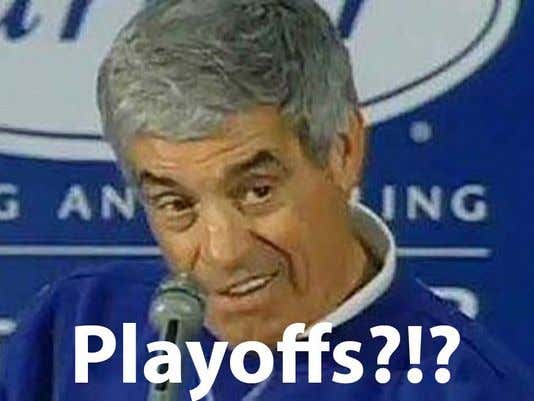 Yeah, that's right. Say what you want, but that's what I went to bed thinking about. I know we're 3-6, and I know it would take us winning our final eight games of the season to finish 10-6 and play in the wild card. But I also know that the pieces are there to do it, and the schedule is as favorable as I've ever seen.

Name the loss? Three of those are literally guaranteed wins. And another should be win. You can say we're going to lose to the 7-2 Ravens all you want, but here's my automated response to anything regarding Baltimore:

If we get to Week 16 and the only thing in our way is that Ravens team, you're telling me the Dawg Pound doesn't will us to victory at home? You're crazy. The Browns would be on a six game win streak, at home, with the Ravens and tanking/terrible Bengals standing in the way of a playoff spot. I'm not worried about the Ravens. I'm just worried about the Steelers.

If the Browns (2.5 point favorites) win this Thursday at home against the Steelers, who have surprisingly won four straight games, then I'm going to need to buy a conductor's hat because I'll be driving the Browns playoff train. Well, actually I'll be riding shotgun. Because the real conductor was Myles Garrett when we fell to 2-6 after losing to the Broncos.

And I officially do believe. This offense looked different yesterday. Kareem Hunt is going to be a difference maker, no doubt. And pairing up him and Nick Chubb is far and away the best backfield in the league. I usually would let the professionals do their job, but Freddie Kitchens is such a bad coach that I feel I need to give him some advice. Hey Freddie, keep doing THIS!

Run the ball until we need to pass the ball. And then when we do, use our weapons! You still can't convince me that OBJ and Jarvis is the most talented recieving duo in the league. And uhhh, it pretty good idea to use Hollywood Higgins, too. That worked out well yesterday. We just need to find ways to get our playmakers the ball, Baker and Freddie!!

The dream is alive, folks. Can't lose one more game. But who's going to do it? Who's going to put the nail in the coffin?

**I can't help but be a Debbie Downer a little bit here. Why couldn't we beat the 2-6 Broncos last week? Or beat the Seahawks when we went up 20-6? Being 4-5 would feel so much better than 3-6 right now. If we were 5-4 I'd already be buying my playoff tickets. But now we need to win the next 7. Guess we're gonna have to do this the hard way…