There it is. Per the NFL official standings the Bears are officially “in the hunt” 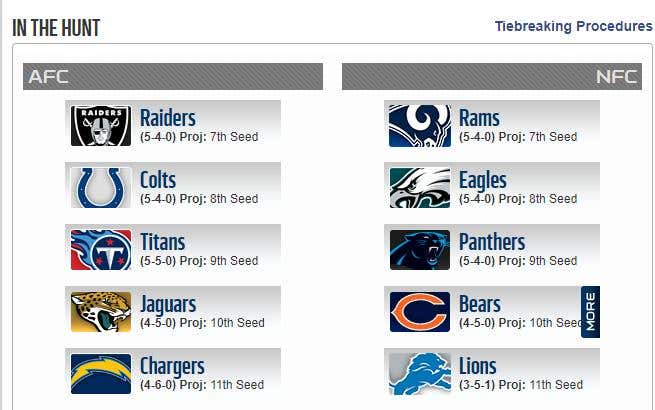 Says it right there. Sure, it might just be about math. It might not be pretty. But the Bears are alive. Better to be 4-5 than the Bengals. Beat LA…jump them and you’re .500. Then you got the Giants, Lions, and Cowboys. All very win-able games. If you’re looking at the schedule and planning the first weekend in January around the Bears then you’re a Carl. You believe. You’re getting in the hot tub

Are you crazy? Are you irrational? Are you borderline bi-polar? Do you believe in the Bears? Do you want want to get hurt? Congratulations…you’re a Carl.

The flip side…you could be an Eddie. You can win a game…and be miserable.

Are you miserable after a win? Signs of growth for Mitch have you saying “fuck him, it’s too late” as you sing pop songs from 2009? Are you smart? Are you rational? Are you hoping to be put out of your misery until the Bears put you through the exact same thing on loop every year for the rest of your life?

I am not sure which is a better way to go through life. In my head, I know Eddie is right. The Bears have given us nothing this year. It’s four wins against Flacco, Keenum, Cousins, and Driskel. The Vikings and three teams who aren’t realistically in the hunt. Not great. Even when Mitch looks okay like he did yesterday against a horrible Lions defense, it still wasn’t pretty. It was 20 points at home. All the same warts were there yesterday that showed up in all of the losses. Play-calling, missing open receivers, and running game stuck in neutral. And yet…

I am a Carl. They don’t ask how, they ask how many. And there’s no reason why the Bears can’t turn it on and rip off those four straight games. They could very easily be 8-5 by the time you start Christmas shopping. Sign me up for the roller coast that is most definitely going to end up going off the rails. Get me in the hot tub