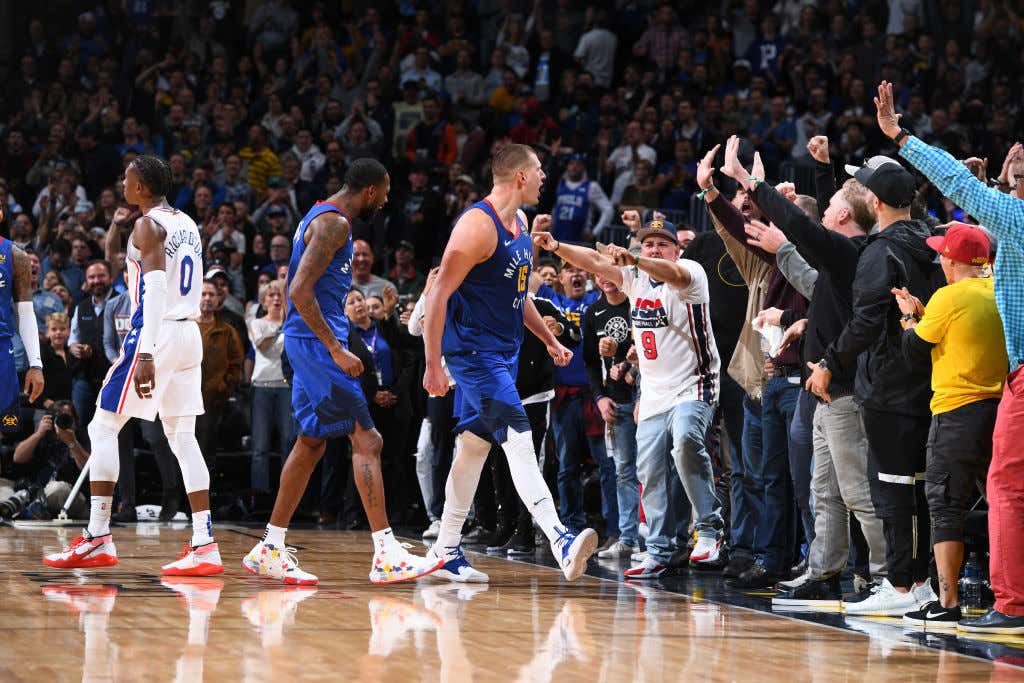 OK we'll be talking more about this in tomorrow's Last Night In The NBA blog but we had two absolutely wild finishes tonight that happened about 10 minutes apart that both directly benefit my beloved Boston Celtics. Let's take it from the top and start with Sixers/ Nuggets.

The Sixers dominated this game pretty much from the jump. The Nuggets couldn't buy a basket early, every time they cut it to like 4-7 points the Sixers immediately punched back. Things got so out of hand the Sixers had a 19 point lead in the fourth quarter. No way they blow that right? Trust the Process and all that bullshit. HA! Just kidding they scored 13 points in the fourth quarter, lost it 35-13 and in crunch time it was Big Honey with a sweet game winner

Just an absolutely pathetic showing from the Sixers over those final 12 minutes. Their stars, Al Horford/Tobias Harris/Joel Embiid combined to go 2-12 with just 6 points and 4 TOs. Probably could have used Jimmy Butler eh? Meanwhile Jokic completely dominated Embiid and everyone in this path to the tune of 16 points on 7-10 shooting. It makes no sense how someone like Jokic keeps pulling this off but that's why you don't question Big Honey. HUGE win.

But that's not all. Then we have the utter chaos that went down between MIL/UTA. UTA did everything they could to throw this game away, including a final three seconds that was hilariously bad

But a Khris Middleton travel with 1.3 seconds left (money well spent!) gave the Jazz one final prayer. And just like he did against the Sixers a few nights ago, Bojan Bogdanovic made a gigantic big balls shot to seal the win

The Jazz had no business being in a game this close, their largest lead of the night was 22 and this game only had 2 lead changes all night. We see MIL come back and win games like this all the time because for the most part they are impossible to kill. But there's something about these West Coast trips man, weird stuff happens when Eastern Conference teams head out there. It's late and wacky shit happens all the time, and for my own rooting interest I could not think of two better endings to Eastern conference rivals.

All I know is this. Imagine playing at least 7 games and having multiple losses? Shit imagine having THREE? How pathetic. Meanwhile the Celts are just sititng here with a 1 game lead over MIL and a 1.5 game lead over PHI, two teams that were supposed to be heads and shoulders above them. I'm sure there will be nights like this in the Celts future, especially with them in SA tomorrow but for right now I'm going to sit back, refill my Kool Aid and enjoy my first place Boston Celtics. Sucks to suck.