At the risk of bringing politics to a website where politics do not belong, remember when Russia was no longer considered a threat? When on both sides of the political aisle it was seen as nothing more than a failed state that was a shadow of its Cold War self? I'm talking about a time when President Obama mocked Mitt Romney for being worried about Russia with "The 1980s called; they want their foreign policy back," and the line landed perfectly? Well whichever of those candidates you voted for or whether you think the Russians successfully interfered with our last election, you'd better wake up and realize that they are undermining our democracy every day by hitting us where it counts.

That's right. While you've been obsessing over football, the World Series, the NBA and NHL seasons and waiting for "The Irishman" to finally show up on Netflix, your nation has been getting its clock cleaned at rinks all across our own continent. A sport where we thought the Russians were long past their glory days has become theirs again like the Iron Curtain never collapsed. I don't need to remind you about the five straight Olympics when their men won the title before Evan Lysecek returned the US back to the top of the medal stand. Well right now, those same bleak days are ahead of us in the Ladies Division.

I mean, just watch that performance by Anna Shcherbakova at Skate America. Witness that costume change at the beginning and tell me not to worry about our future. What kind of sorcery is that? I've seen this performance 100 times and I still don't know how she does it. It's supernatural. Our Ladies simply have no chance against this. None. 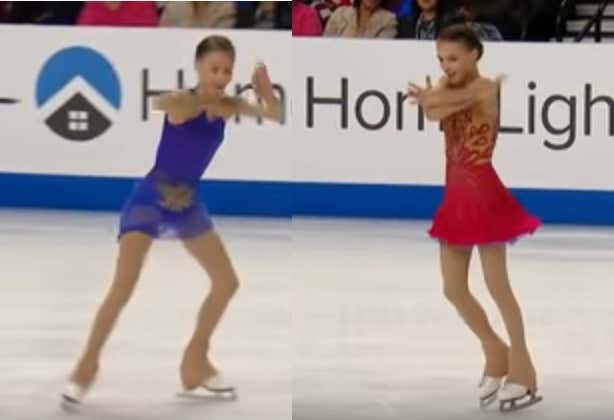 And the truly disturbing thing is that, even if you remove the fact she can change the color of her dress in the middle of a program without skipping a beat with a technology our greatest minds don't understand and can't reproduce, Shcherbakova would win anyway. Just on the basis of her program. The artistry with which she interprets Stravinsky's "The Firebird." But even more so the jumps, which are impossible to the US Ladies. Which had her 20 points ahead after this Short Program. And she was the first female ever to land two quad Lutzes in a single program.

And if you were looking for some reason to feel better about your country's prospects at Skate Canada, you had another thing coming. Because Alexadra Trusova stole the show with her Free Skate where she portrays Daenerys Targaryen. She does four quads. FOUR. Lutz, Toe, Flip and Salchow :

This performance not only set a world record for the Free Skate, it gave her the highest overall score ever.

I'm not here to depress everybody. I'm just trying to give America a reality check. And a wake up call. Because you can ignore this problem all you want, but it's not going away. Don't believe me? These two warriors are each just 15 years old. And there are younger, better athletes than them coming up through Russia's junior ranks as I write this. So it's only going to get worse unless we do something about it, starting now. Call it a 1980s approach to international sports if that makes you feel better. Just don't forget that the '80s produced Ivan Drago. And right now Shcherbakova and Trusova are treating the best skaters we can produce like Drago did Apollo Creed. Be afraid. Be very afraid.