As I was soaring above the iridescent skyline of a utopian society where five-foot-two is the average male height and retweets are the only form of currency, my favorite recurring wet dream was brought to an untimely halt by a loud, repetitive thud on my bedroom door. It was my mother, a problematic 56-year-old buffoon, waking me up at an ungodly hour just to ask how I wanted my toaster strudel. It's always golden brown with zig zag icing. It never hasn't been golden brown with fucking zig zag icing.

"Are you sure you don't want me to draw a picture on it this time?"

She was oddly energetic and chipper for 11:15 AM, but ironically, the least woke person in our household.

"Okay, Georgia O'Keefe. Draw me a fucking picture this time. And when you're done, draw yourself a bath and bring the toaster in there with you."

Like most roommates, we had our fair share of differences. But unlike most roommates, one of those differences was that I was a viral sensation and she was a completely cloutless hag. The king-peasant dynamic between us drove me to do things like eat my meals in my bedroom while she sat alone at the dining room table and did racist crossword puzzles or whatever it is that boomers do in the morning. It's funny to use "boomer" as an insult now. I know this because the cool beer company did it. 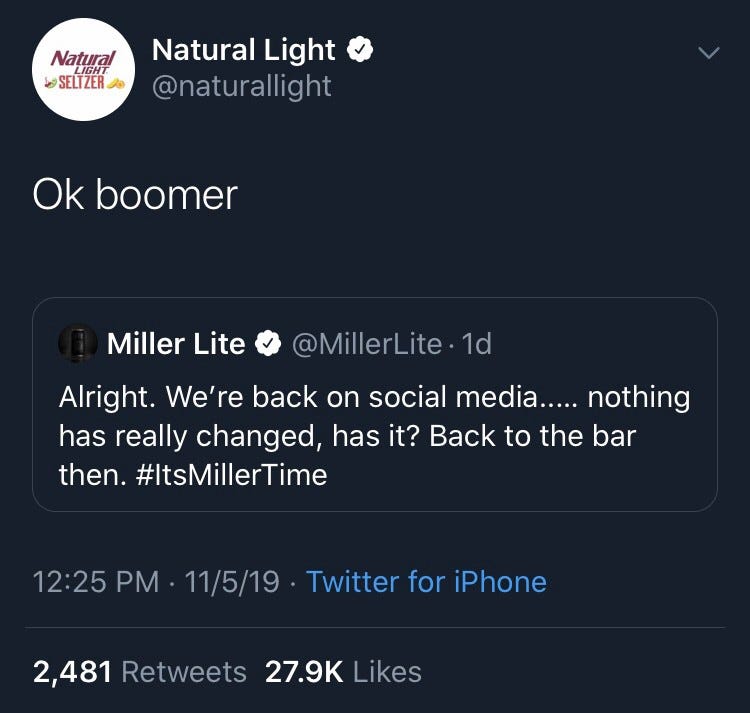 Even though the sun was barely up and my fellow internet comedians on the West Coast weren't even out of mattress yet, I still managed to summon the willpower to start my work day. In my field, I couldn't afford to be offline. I couldn't risk the chance of missing things like this: 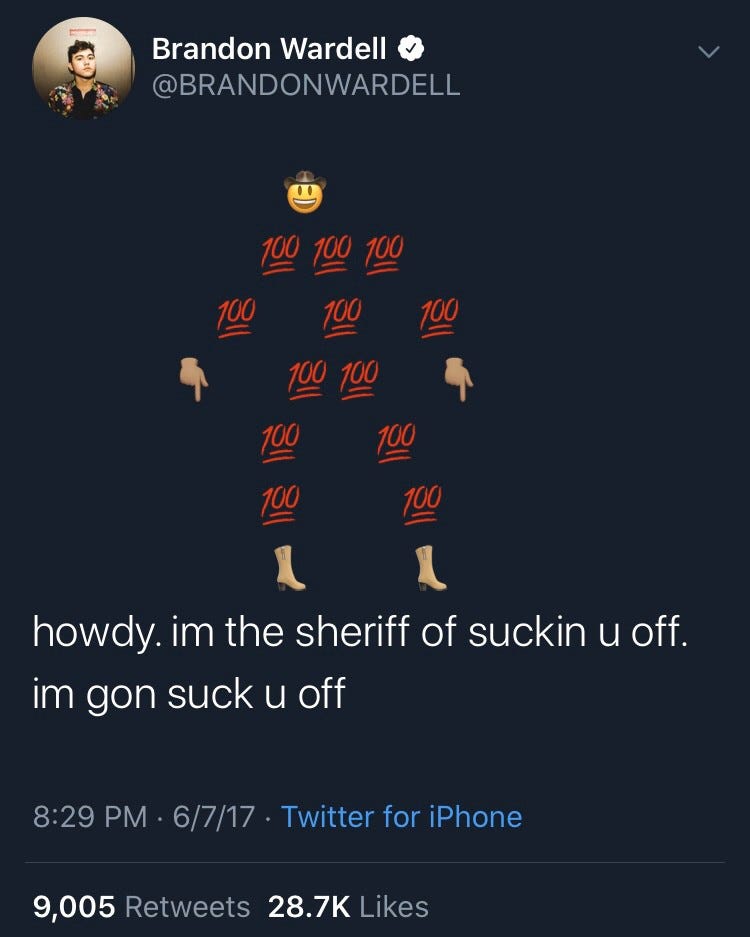 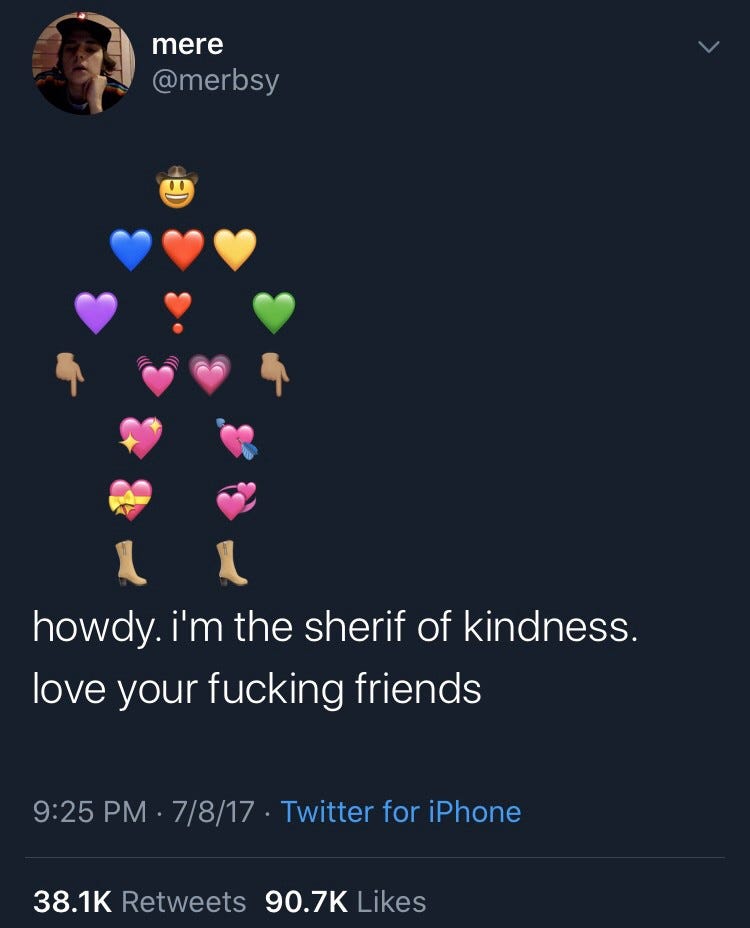 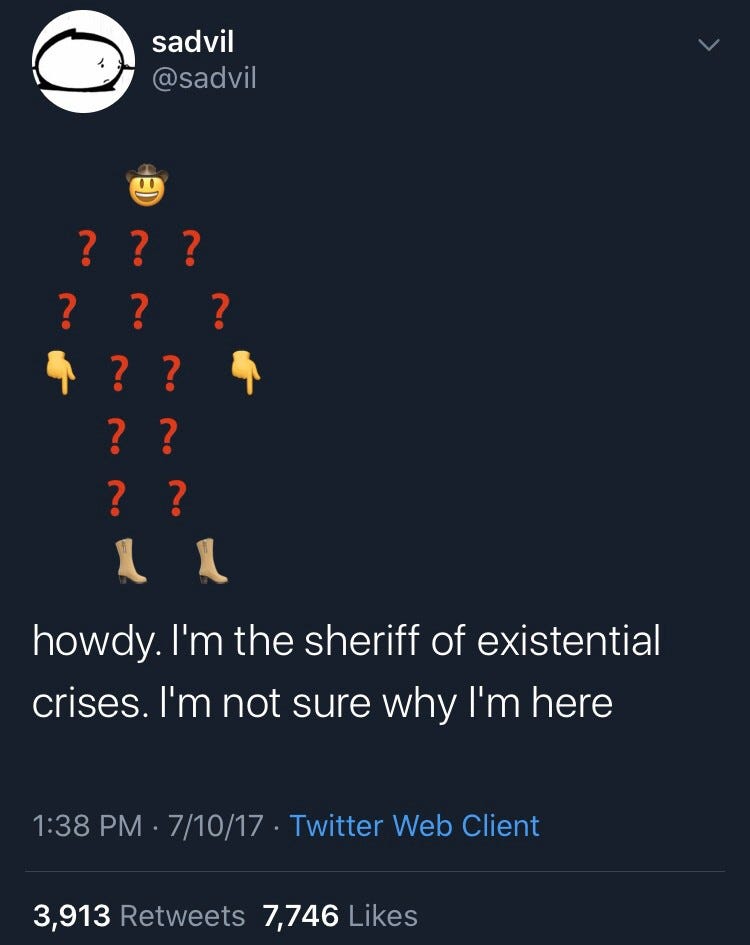 "Queef," I muttered to myself between gulps of TruMoo. "I should've called her Georgia O'Queef instead." As a Twitter comic, I was always self-evaluating and thinking of new ways to improve my material and make it even funnier. 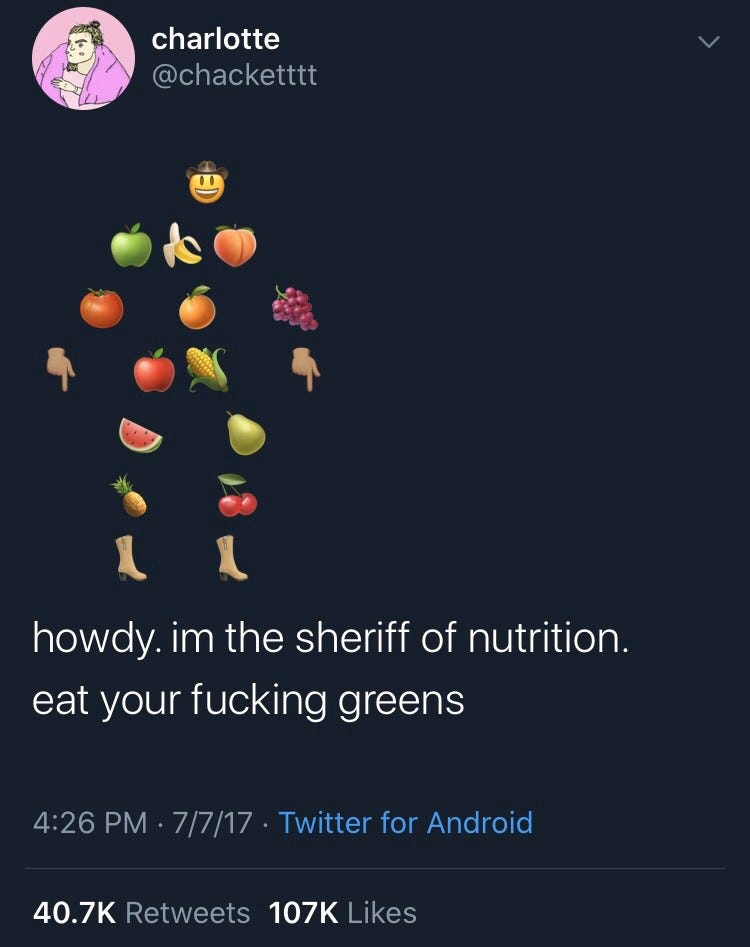 "Are you going to apply to any jobs today, honey?"

She was completely oblivious to the fact that I was in my laboratory, tediously arranging and rearranging emojis in a brilliant manner that made them look as if a charismatic stick figure sheriff was gesturing toward a formulaic greeting.

"I heard the Tim Hortons that just opened on National Road is hiring. I can drive you there if you wa-"

I was just a couple strokes of creative genius away from pulling the trigger on a certified platinum hit that would likely do Woodstock numbers, and yet, my employable worth was being reduced to that of a lowly coffee pourer; a bean bumpkin.

To some, my work comes across as "unoriginal, easy-to-replicate, low brow formatted cancer." But that's also the same subset of people who probably loudly snicker at stand-up comedy. 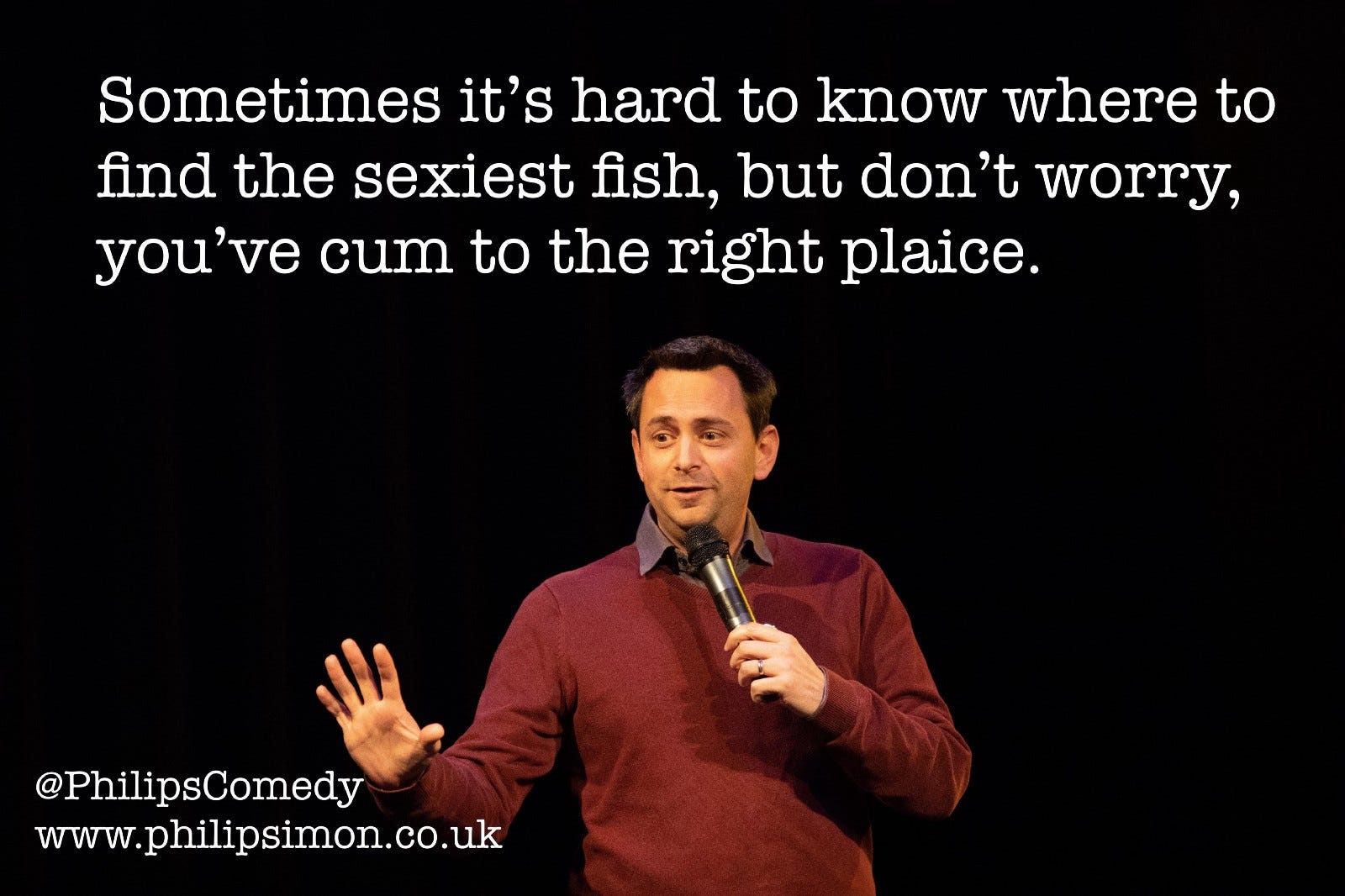 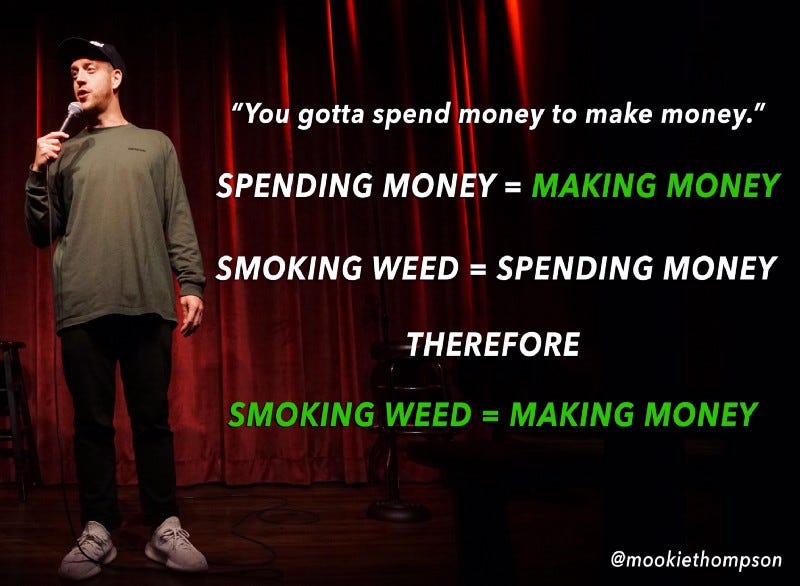 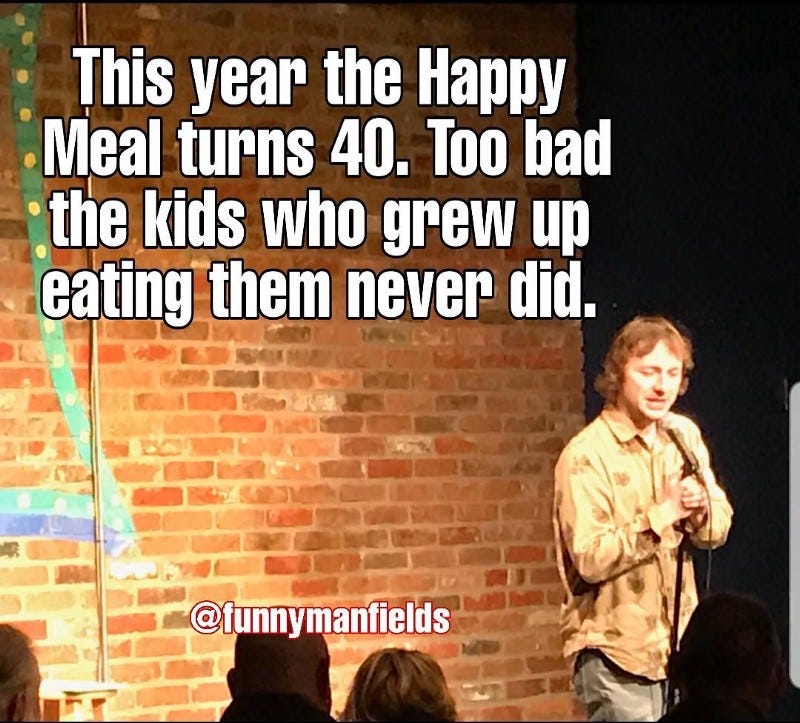 Ok boomers, go back to your caves to choke on butterscotch while you cackle at old Michael Richards clips. And leave the humor to the real comedians of the world: 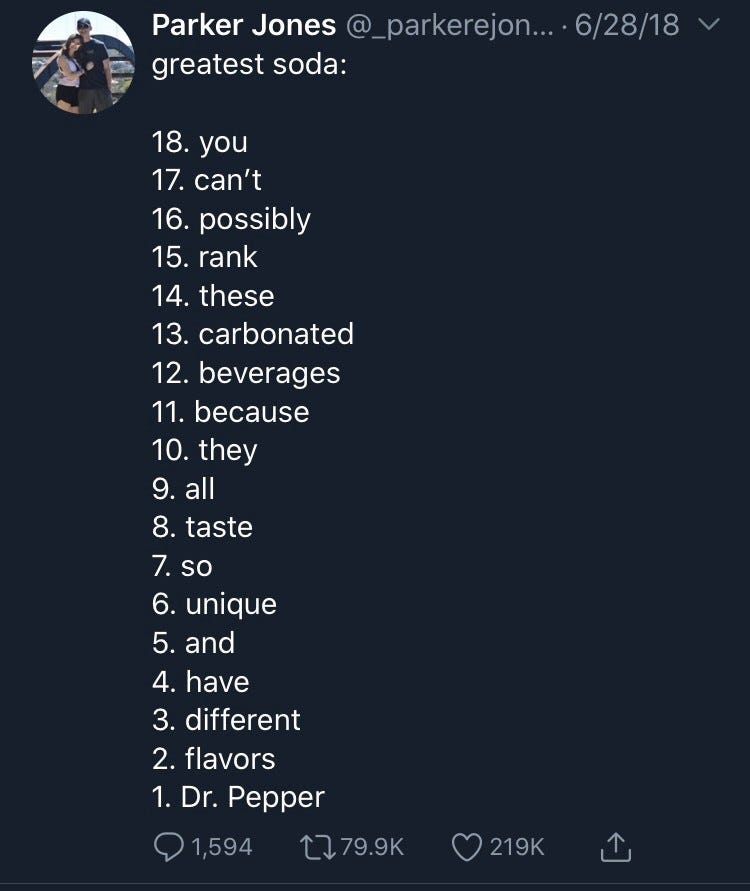 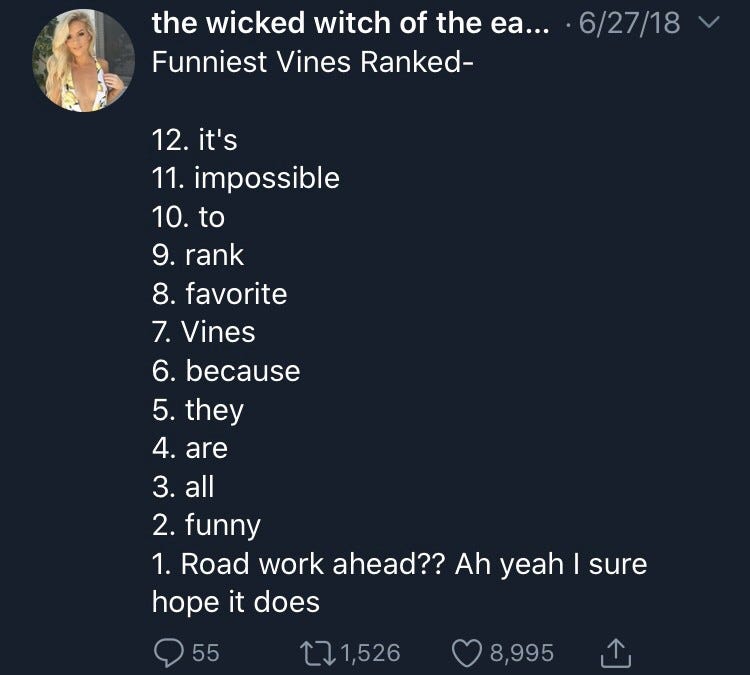 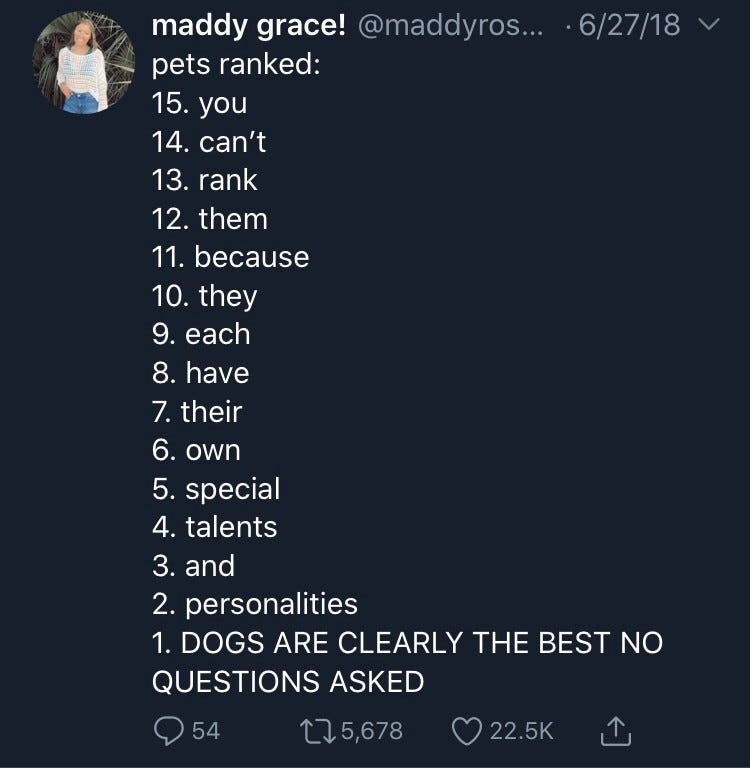 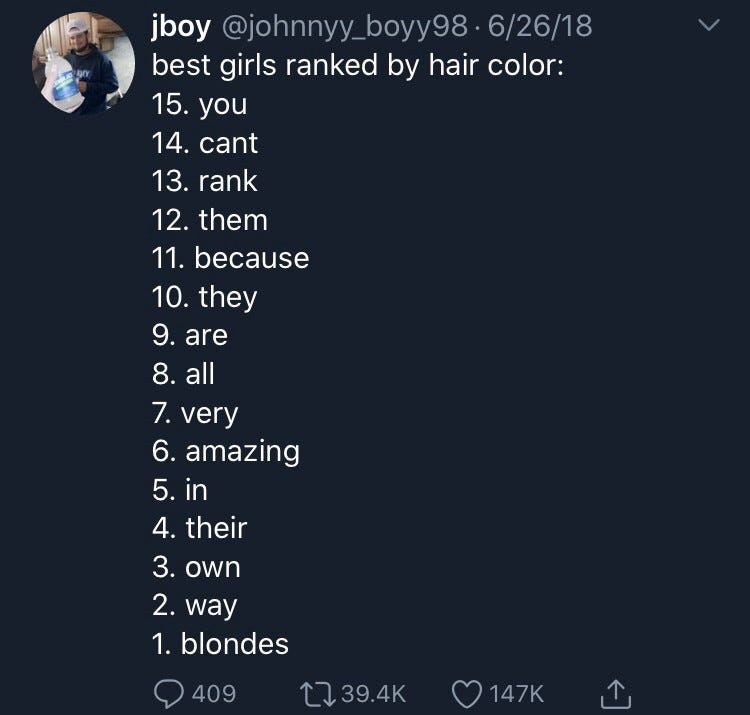 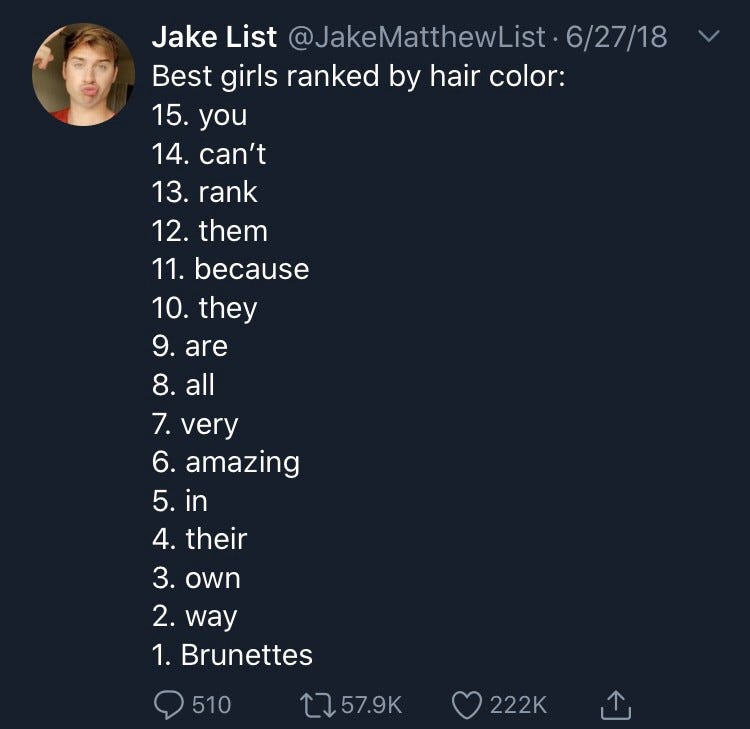 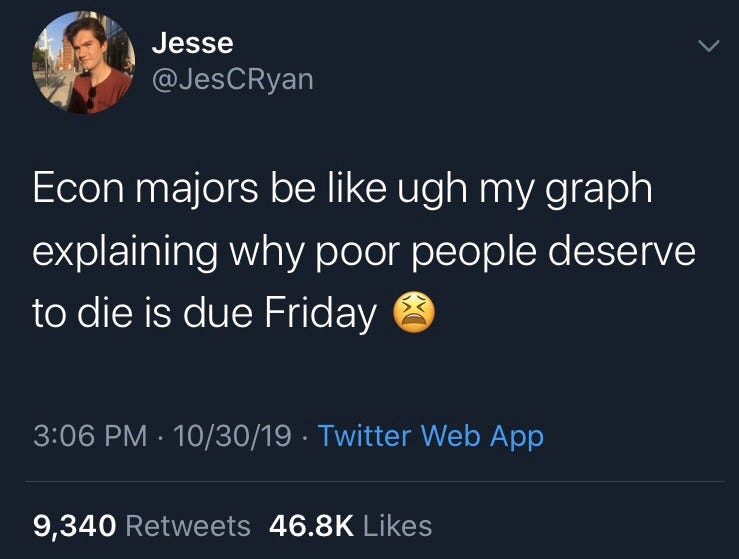 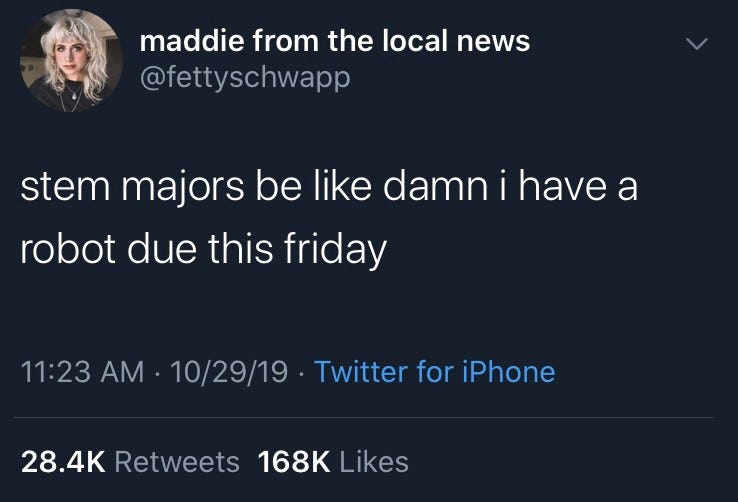 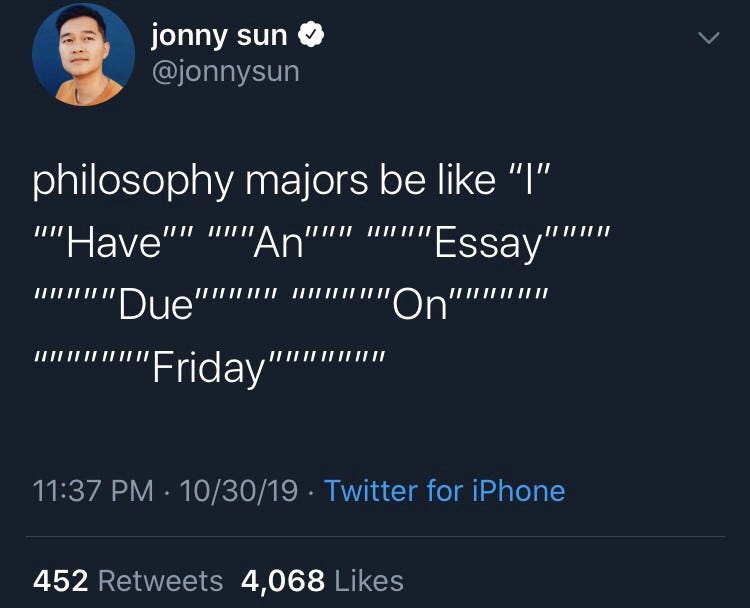 Like it or not, there's a cultural shift going on in the world of entertainment right now. Posting humorous content on Twitter —jokes, memes, captions, other people's jokes, etc. —is the new "pursuing a career in comedy." And having those posts flourish online, or go viral, is the new "being a successful comedian."

That's why the funniest and most talented up-and-comers in the field are forgoing open mic nights and saving their best material for a platform that's much more rewarding than a few opioid-induced chuckles from some townies at a local dive bar. Do you think those muskrats are willing to subscribe to patreons or buy atrocious $30 T-shirts?

However, it seems like some people, especially older generations, are still ignorant to the sheer amount of work that goes into these new-age comedic masterpieces—the time, effort, talent, and creativity it takes to succeed in the unforgiving world of digital posting. It's time for everyone to put aside their biases and fully appreciate the new era of comedy: the modest masterminds sacrificing their nonexistent social lives in order to accomplish what 99.9% of stand-up comedians aren't capable of doing on stage: Making hundreds of thousands of people laugh with just one, simple joke. 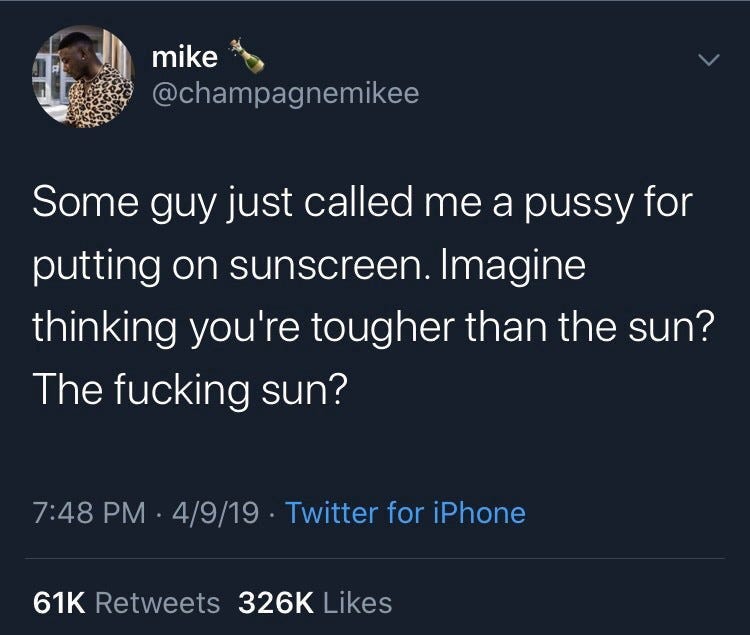 I'd be discrediting Mike by referring to his magnum opus as just a "simple joke," but that's how advanced and evolved the minds of this new generation of e-comics have become. With just 280 characters and a boundless imagination, they're able to concoct original pieces that resonate with several stadiums worth of people. 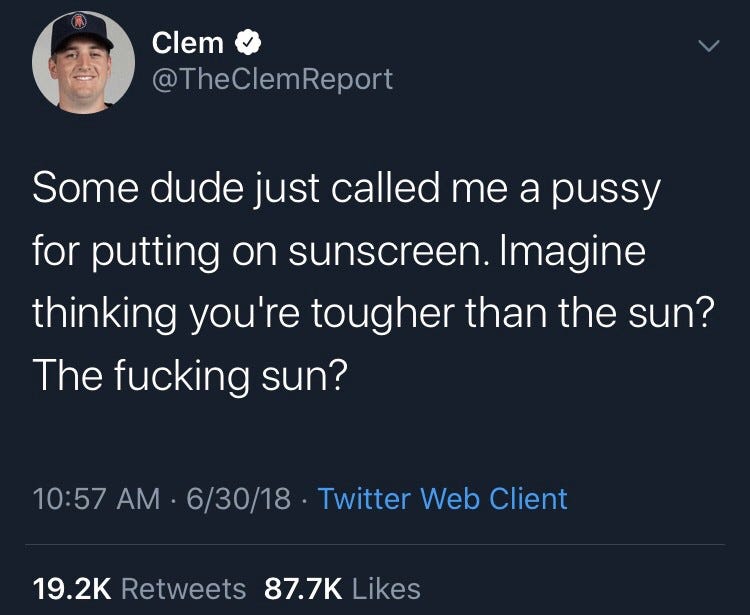 Sure, he drew a little bit of inspiration from this 2018 tweet. But Michael's unique stylization (strategically changing the word "dude" to "guy") and expert delivery (posting it at 7:48 PM from an iPhone) is what separates Twitter prodigies like him from the Dave Chapelles and Bill Burrs of the world.

To put things into better perspective, the most successful stand-up comedian of all time, Kevin Hart, attracted a crowd of 53,000 people to the biggest show of his entire career. While that may seem like an impressive feat, Twitter's top stars are appealing to a larger audience than that on a daily basis. 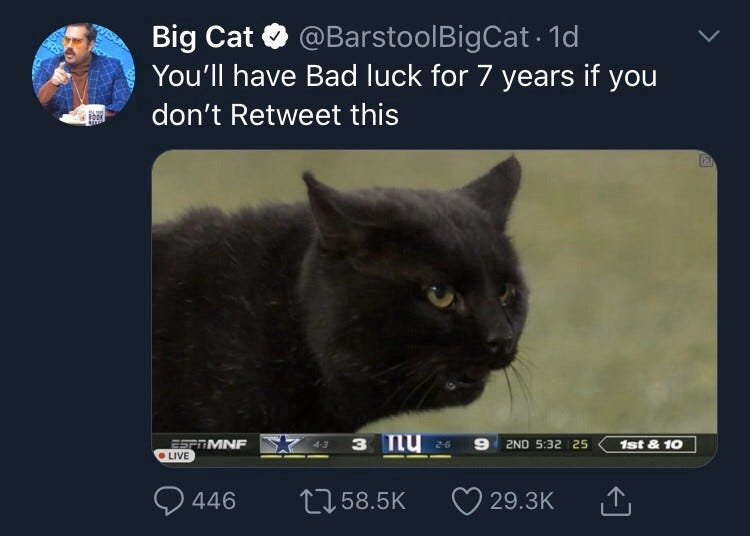 The delicately woven satire that pokes fun at superstition culture, the seemingly cryptic capitalizations of the B and R that subtly mock Bleacher Report's current social media presence, the professionally executed photograph that perfectly captures the absurd juxtaposition of a feline on a football field. This is what we "in the biz" like to refer to as a chef's kiss buffet of bits. If those 58.5K retweets were converted to claps, the decibel levels would be enough to make a Kevin Hart special sound like a Gallaudet gala.

You might look at this cleverly-formatted jab at the city of Philadelphia and think to yourself, "this is good shit." The true brilliance, however, comes from the crafty minds that subsequently used that tweet as a spark of ingenuity to construct the unique elements that truly sculpt a viral smash hit.

The savants who figured out how to substitute U.S. cities for hip hop artists.

And the oppressed authors who were forced to helplessly watch as their original pieces were plagiarized without repercussion. 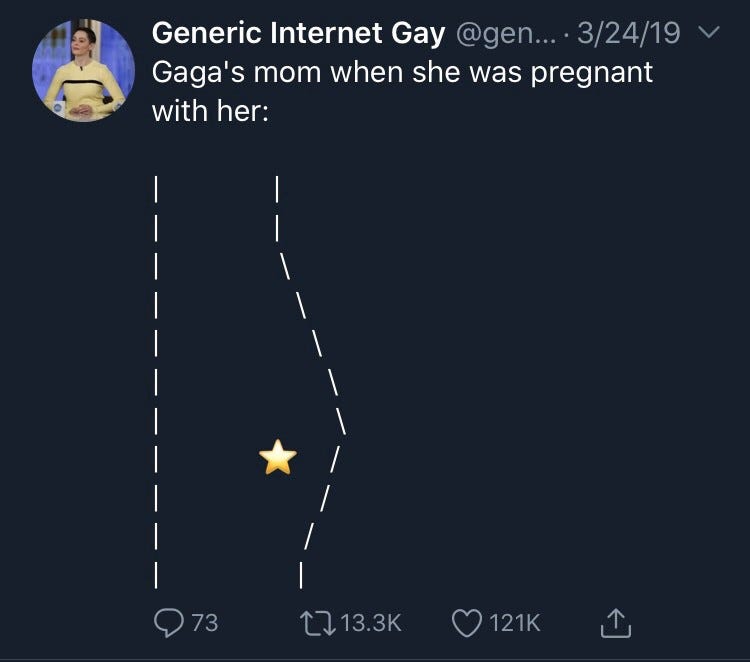 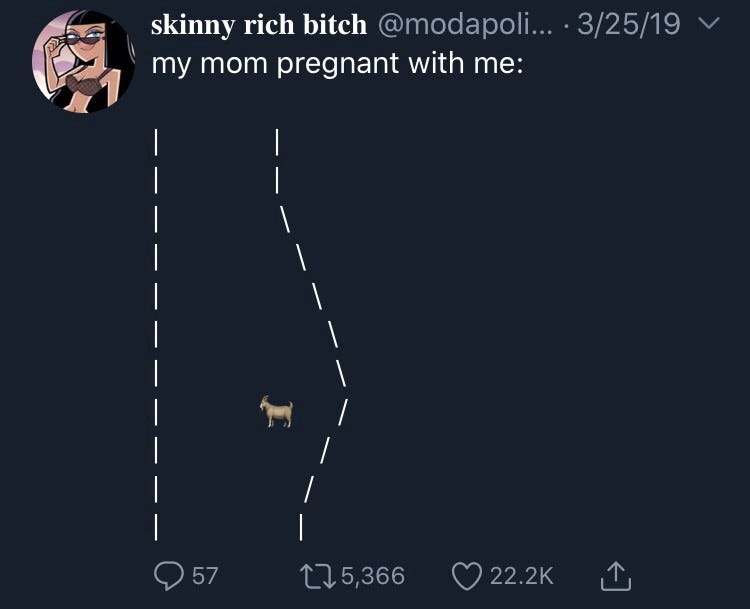 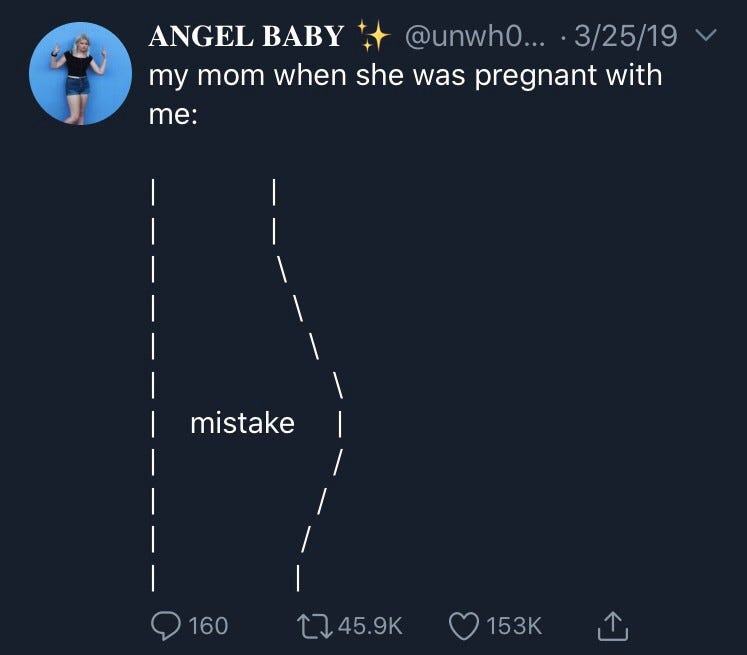 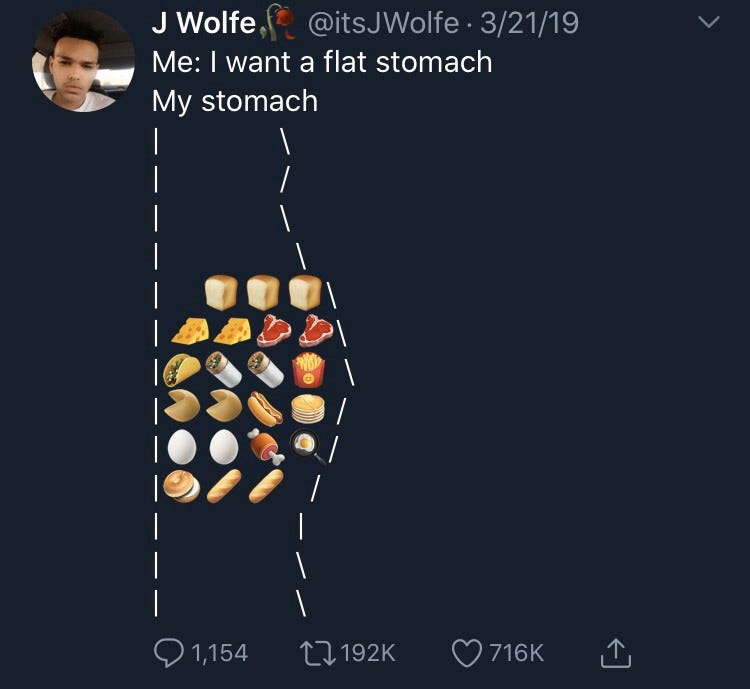 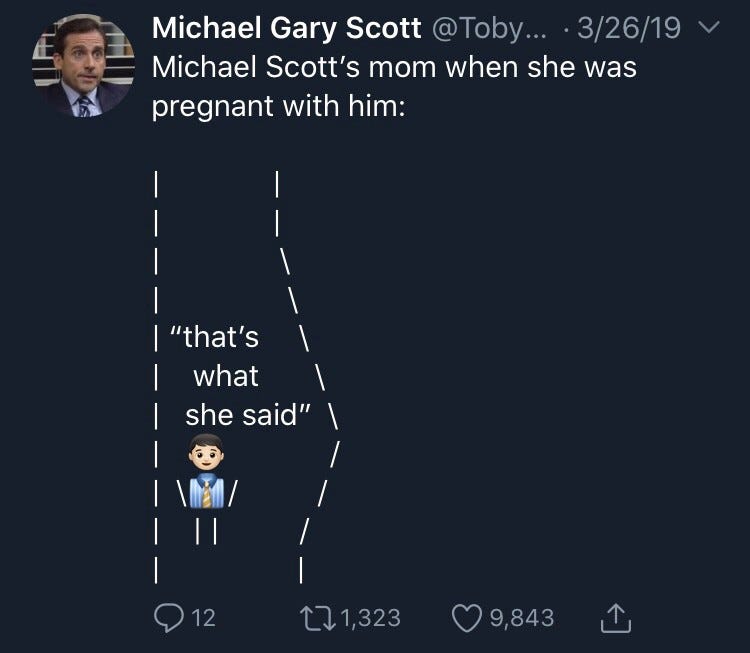 Whether I'm painstakingly constructing the wacky dialogue that happened between me and an imaginary person on a fictional date, or something exceptionally zany that my therapist "told" me, or maybe just slightly rewording the text and punchlines of a pre-existing joke, I'm doing comedy. And I'm doing it well. So while you struggling comics "battle your fears and anxieties" in order to get on a stage and spew a few "jokes" into a microphone, I'll be enjoying my comedic success from the comfort of my childhood bedroom. And I'll be doing it with a smile on my face. 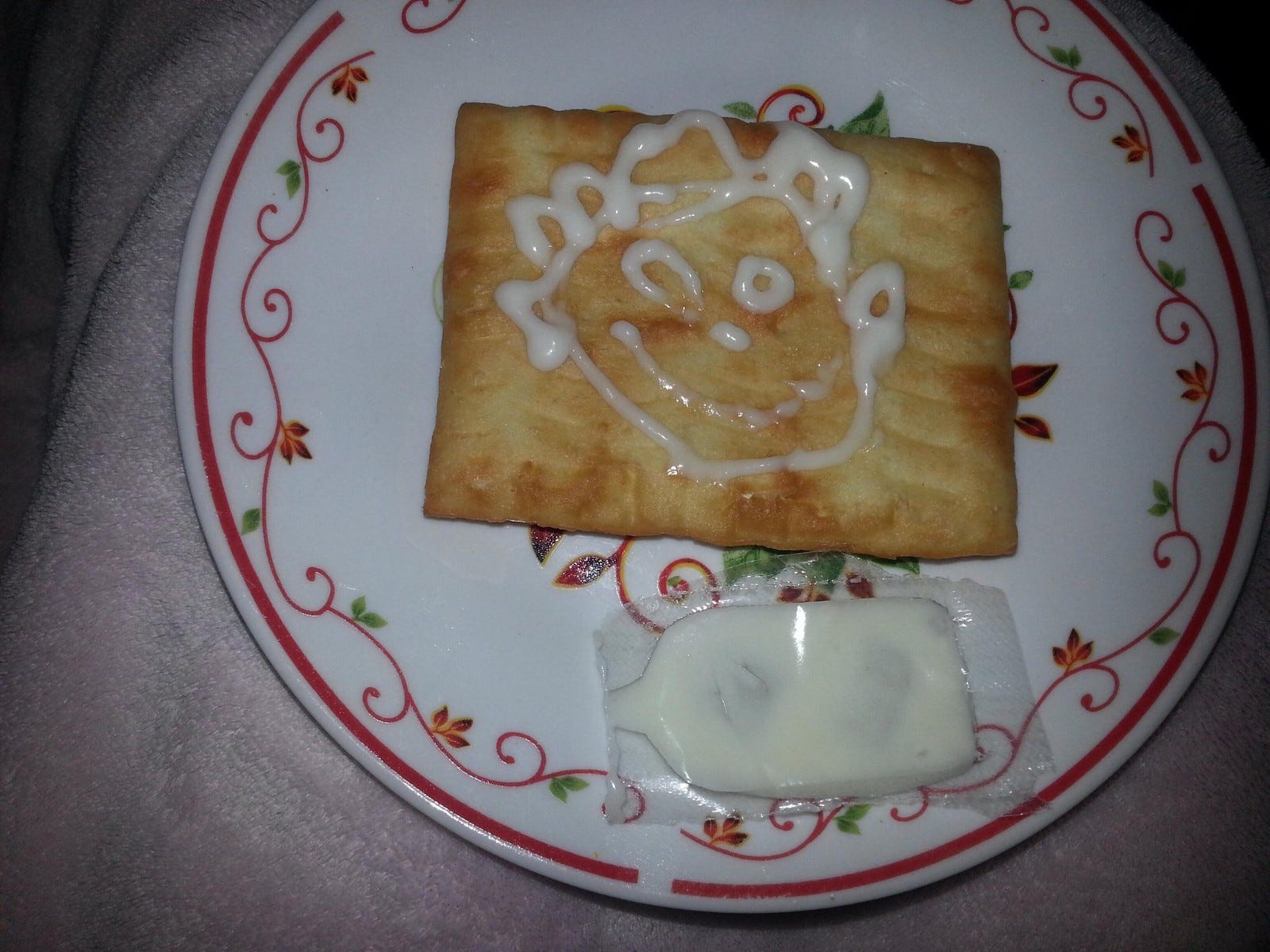