I saw this swing on Twitter this morning and my ears perked up.  This is the kinda kid former travel baseball entrepreneurs like myself drop duffle bags of money off to parents for.

Kid’s what, like 5 years old?  For a 5 year old this swing is near flawless.  Not totally flawless, but close.  Like, I tried to get high school kids to incorporate their legs into their swings instead of swinging like a bunch of pussies all day every day and they couldn’t grasp the concept that power is generated from your feet, legs and hips aka your lower half.  Fucking assholes.

And that’s where we’re gonna start with this kid.  I’m legit gonna break this kid down from top to bottom as if he’s some blue chip ‘spect.

I’m not embellishing when I say this – this kid’s lower half is picture fucking perfect.  LOOK AT THAT BACK LEG AND HIP DRIVE!!!  Squishing the bug can go fuck itself.  His back leg and hip explode through the baseball like a linebacker filling the A gap.  Roquan Smith should take notes.  Feet are perfectly balanced as he lands too.  Like, it’s obviously a joke that I’m breaking down a little kid’s swing but it’s so impressing that I’m not joking at the same time.  It’s damn near impossible to teach an average HS kid to drive his back leg and hip through a baseball like this while also maintaining balance, let alone a little kid who’s only been able to walk for a handful of years.  He has the balance of a goddamn ninja.  This is beyond impressive.  And I fully believe that if you can master athletic movements in your lower half first, the rest of your body will follow suit.

Now with that said, with the big leg kick he will be susceptible to off speed pitches that can throw off his timing.  If he’s cheating fastball and gets a breaking pitcher out/off the plate, he’ll land to early and be caught with his weight totally on his front foot. If that happens he’ll either swing through the pitch or flair it to RF, but the latter will only occur if he has the ability to identify it early and keep his hands back long enough to make contact.  But all of this is more to do with pitch recognition than physical mechanics, and we’re not talking about pitch recognition at all here, solely mechanics.

Also, don’t listen to this asshole:

Lil guy here needs to hit the goddamn weight room. His core is weak, sloppy and leaves a lot to be desired.  The best of the best use their cores as catapults to engage their arms as levers that explode forward when so much torque is developed you can’t keep them back any more.  Our guy here doesn’t do that.  In spite of having a great lower half, his core doesn’t totally follow the necessary chain that should allow for a maximum power output on contact.  It’s not *awful* by any means, and that’s due to how good his lower half is, but there is definitely room for improvement.  Do some crunches and pull ups dude. 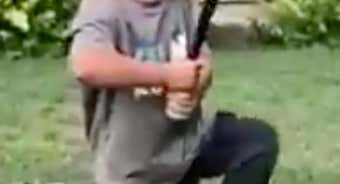 Line up the knocking knuckles bub.  Bat should be held in your finger tips, not your palms.  You’ll get a tick more whip in the bat if you do this.  Also has an arm bar in his bottom arm that makes his swing long AF:

Right arm shouldn’t ever really be anything other than a perfect right angle.  How in the FUCK do you think you’re gonna catch up to a 68 MPH heater when you get to Babe Ruth ball???  Also, though it’s a matter of personal preference, I hate the one arm follow through.  Keep two hands on the bat all the way through contact and you’ll stay that much shorter IMO.  That’s why his swing is a little long and loopy and he’ll have trouble staying inside the baseball.  If I’m pitching against this kid I’m force feeding him inside fastballs all goddamn day until he proves he can turn on them.  That said, his bat path through the zone should allow for a lot of contact.  His swing is in the zone for its duration, and he has a slight upper cut which that will allow for him to lift the ball to all fields if he finds a barrel.

The ideal launch angle is between 25 and 35 degrees or so, and if you find a barrel, hopefully the BABIP gods are on your side, as you *should* at worst find a gap and at best find the bleachers.  My sophomore math skills tell me this kid’s launch angle on this particular hit was about 27 degrees: 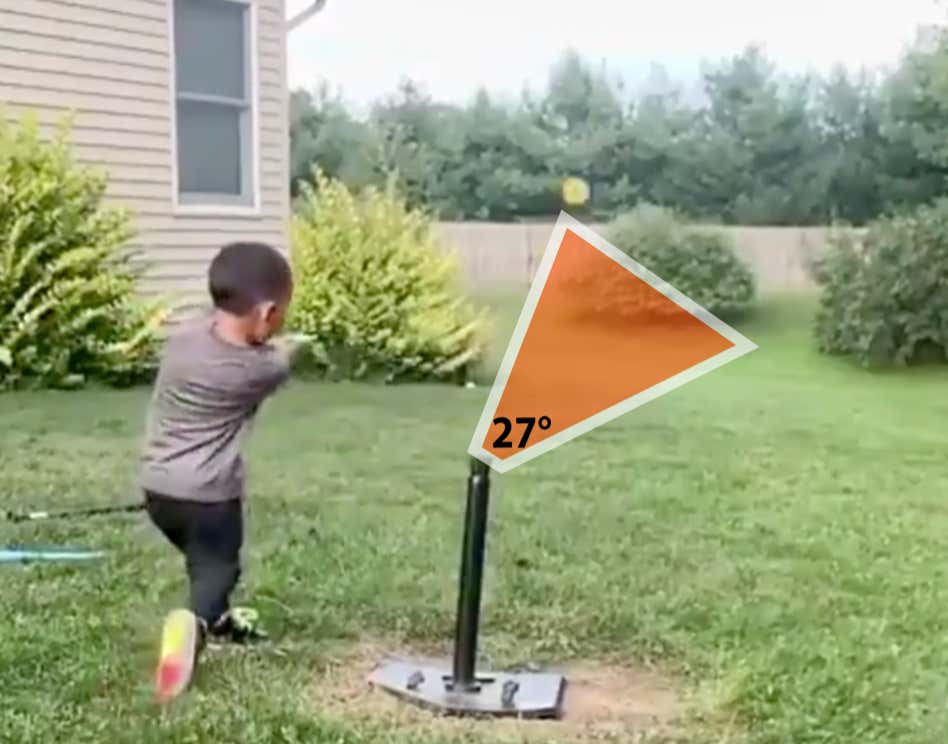 Bombs away.  This ball at worst is making an OF turn around and making a play and more than likely finding the CF bleachers.  LOVE it.  Chicks dig the long ball.

Basically what I’m saying is if you gave me a month or two with this kid I’d turn him into a future MVP and a borderline Hall of Famer.  Another good comp is Justin Turner:

Just do NOT let this happen: