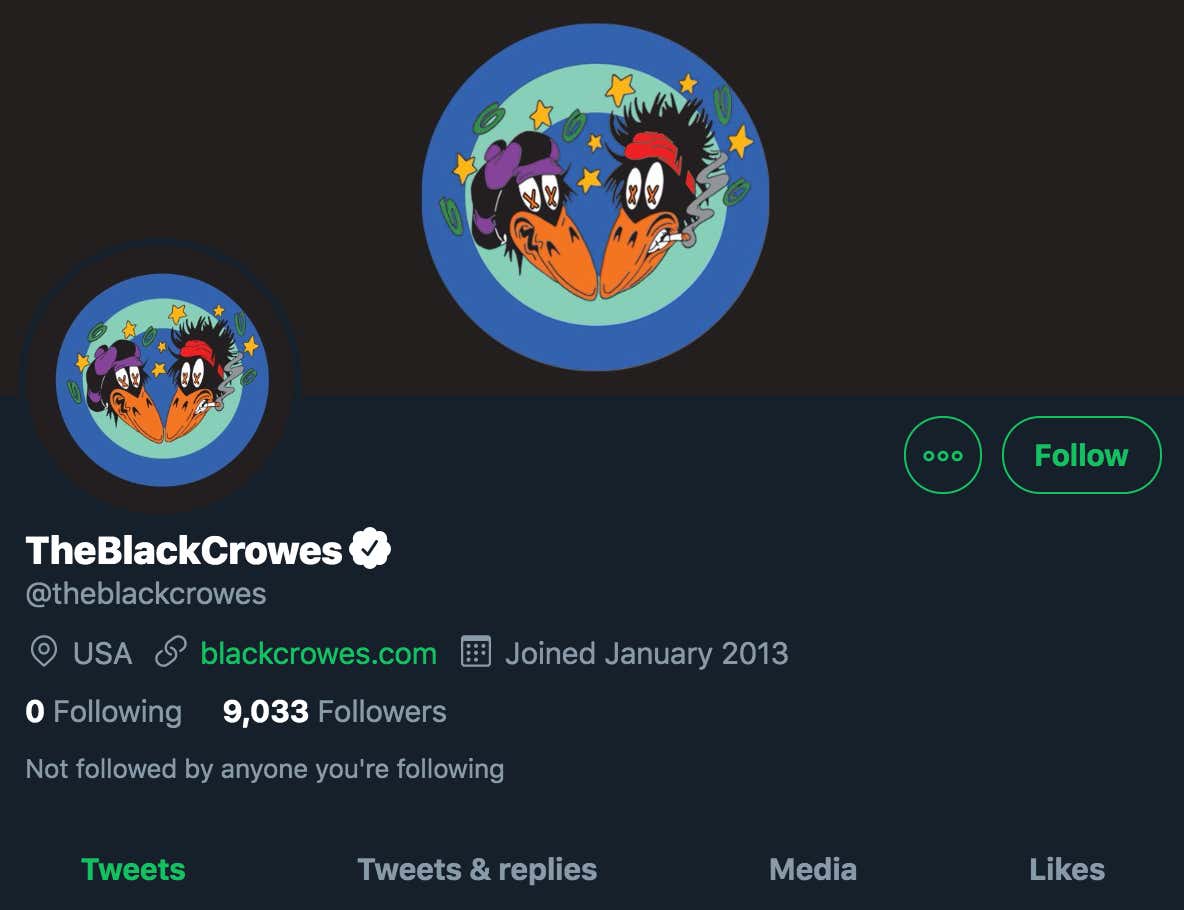 Blabbermouth- THE BLACK CROWES appear to have started teasing their much-rumored 2020 comeback tour.

Last week, a BLACK CROWES cartoon graphic popped up on the band's social media, and now the same image has begun to show up on billboards in the U.S.

THE BLACK CROWES have been inactive since they played their final show in December 2013.

Former manager Pete Angelus recently told The Wall Street Journal that he is "aware of the deal" that the Robinson brothers "made with Live Nation for a 2020 tour," while another source that is "familiar with the matter" simply said that "there might be something in the works."

Last month, All Star Signatures uploaded a video of Chris and Rich Robinson purportedly signing autographs for fans together in Nashville in September.

More recently, drummer Steve Gorman said that Chris and Rich Robinson are definitely making plans to reactivate THE BLACK CROWES for a comeback tour in 2020. "I know that they are," the drummer told Joe Rock of the West Babylon, New York radio station WBAB in a new interview. "Well, let me [clarify] that. I've been told by people involved that it's happening. Now, has either one of them told me that? No. I haven't spoken to either one of them. So, I have it on very reputable authority. But then again, until they're on stage, who knows what? But everything I've been told is that it's happening."

Alright - so I suppose nothing's final and concrete yet, as a Black Crowes reunion hasn't been officially announced as of this writing (and this IS the Robinson brothers we're dealing with), but it certainly seems like all signs are pointed in that direction, and that's fucking awesome.

For me, personally, The Black Crowes are actually a pretty recent discovery. Obviously, I've always known the hits - Hard To Handle, She Talks To Angels, Remedy, Jealous Again, etc - but I never really dug into their discography til earlier this year, when my older brother (who is a living, breathing rock n' roll encyclopedia) basically told me enough was enough, and that I had to. He actually introduced me to the band with the following show, describing it as what he'd show to aliens if they came down tomorrow and asked what rock n' roll is...

When you sell me something like that, my expectations are going to skyrocket, but MAN did The Black Crowes still blow those expectations outta the water. I think I've listened to something off 'Shake Your Money Maker' every day for the past few months now. Both that and 'The Southern Harmony and Musical Companion', their second record, are unbelievable. Literally the epitome of the "All Killer/No Filler" phrase.

If you're SOMEHOW still skeptical after that Köln show, dive into some of the live vids from their tour with Jimmy Page...

…and you'll have your face melted off.

Ultimately, this reunion is just really great for rock n' roll. I feel like the genre seen a resurgence of sorts in recent years, from new bands arising like Greta Van Fleet, The Struts, Dirty Honey, and more, to the oldies getting the respect they deserve from the next generation - sometimes thanks to Netflix putting out a Mötley Crüe movie!

I'd say Guns N' Roses really led the charge when Axl, Slash, and Duff let bygones be bygones and took the stage together for the first time in over two decades in three years back, and since, bands like The Smashing Pumpkins, Jack White's Raconteurs, even Hootie & The Blowfish have gotten back together! Just in the past week, My Chemical Romance and Rage Against The Machine both announced their reunions, which begs the question…

WHAT THE FUCK ARE NOEL AND LIAM GALLAGHER DOING?! GET OASIS BACK TOGETHER YOU ABSOLUTE WANKERS!

I know Oasis are the longshot. I know they're the pipe dream. I know that every time Liam tweets about Noel nowadays, he probably adds another few years onto the reunion date…

…buuuuuuuuuuuuuut, at the end of the day, everybody's got a price, right?!

Oasis, in my mind, are unquestionably one of the greatest rock n' roll bands of all time, and you'd be hard pressed to find anybody who outdid them at their peak. There's only one issue - I, along with many people my age, didn't get into the band until they were splitsville. It's been a over decade now since their last gig, and nothing! Not even the slightest rumor of a reunion, just pure brotherly hatred spewed back and forth via social media for a decade.

What we really need is for someone to give the Saudi Princes that are paying Vince McMahon trillions upon trillions of dollars to let them book the WWE a copy of 'Definitely Maybe' or '(What's The Story) Morning Glory?' so we could see what Noel's price is. I'm sure Liam would do it for a hot dog and a handshake.

I guess a boy can dream!