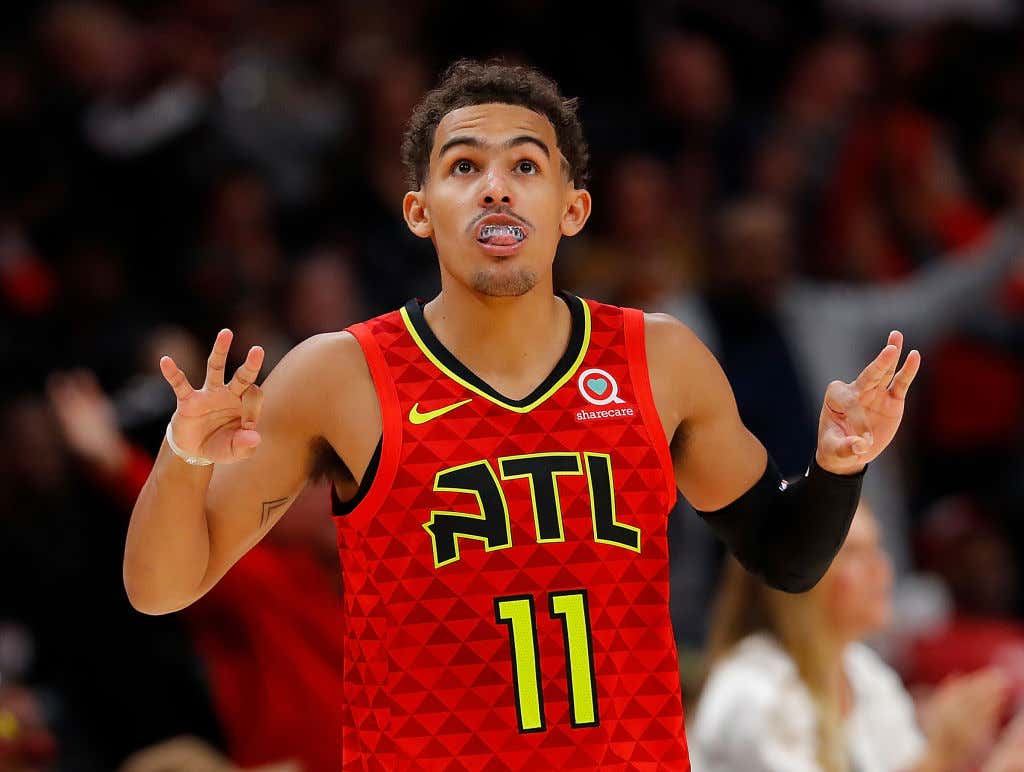 Good morning everybody happy Wednesday and welcome back to another edition of Last Night In The NBA where we bring you up to speed on everything that went down from the night before in the Association. If Tuesday night was all about blowouts, well Wednesday night was the exact opposite. Of the 5 games on the schedule, four of them were decided by 8 points or less which meant it was another night of high drama and crazy finishes. In the event you got caught up in college basketball or some MACtion and missed it, well here's what happened.

On one hand, the Pacers are without Oladipo, Myles Turner, and Sabonis. Those are three pretty huge pieces to what they do so it's easy to spinzone this loss. Plus new Pacers TJ Warren and Malcolm Brogdon continue to look really good for them during this stretch

but here's the thing. You still can't lose to the Hornets, I don't care if its on the road. If the Pacers are going to be that 4-5 seed like many people thought during the year, you have to be better than this. I'd even argue they were even a little lucky this even got to OT after they blew a 14 point lead heading into the final quarter, got forbid they play any defense over the final 12 minutes what a crazy idea that would have been. Instead they gave CHA extra opportunities to ultimately pull off the comeback and are now under .500 and just 1-3 on the road.

It doesn't help that their bench gave them almost nothing and they turned it over 18 times, but this was still a very winnable game if they don't puke on themselves in the fourth quarter.

For CHA, I mean none of this makes any sense. 4-3? The Hornets? Nobody on earth saw this coming, probably not even MJ but the facts are the facts, the Hornets are tied with the Raptors in wins, have more than BKN/DET/ORL who were all playoff teams last year, and suddenly have won 3 in a row.

For the most part things were balanced with 5 players in double figures including 59 points from the CHA bench, they took care of the ball and actually played some respectable defense holding IND to just 49 second half points. It may feel weird to say but just like the Suns and the Wolves, the Hornets start has definitely been one of the surprises in the NBA so far. Who knows how long it will last, but for what it's worth this team is currently a 6th seed.

I'll remind you, the Spurs were one of the worst road teams in the league last season so this result shouldn't be all that surprising. While Hawks fans may be a little bummed that John Collins just got suspended for 25 games, at least be happy knowing Trae Young is the fastest healer on the planet and a silly sprained ankle isn't going to get in his way. We talk so much about Luka (as we should), but let's not forget what a bad man Trae Young is on the basketball court and last night was a prime example of that

I mean that shit is nasty. It'll also help Hawks fans forget about Collins when they watch their two young rookies flourish

See I bet you feel better already. Also, I may be getting ahead of myself, but is it crazy to say that Jabari Parker doesn't look half bad this season?

OK maybe that's going a little too far but this was still a huge win for ATL given they dropped 38 points in the fourth quarter and for the most part put the clamps on a pretty good SA team. The key to ATL making that leap is their effort and execution on the defensive end, so it's good to see them not have to score a ton of points in order to beat a quality opponent.

For SA, your stars showed up for the most part which was nice

but the rest of the Spurs I'm not so sure. Just 41/24% splits while missing 7 FTs and turning it over 15 times this certainly wasn't an ideal Spurs performance. Tough to win when guys like Murray (1-7), Gay (3-10), and White (1-6) don't give you much and it also doesn't help when your defense allows 64 second half points but you put all that together and more often than not it leads to a road loss. Something the Spurs suddenly can't stop doing.

We'll be talking about the Celts in their normal blog, so while we focus on the Cavs now I'll say this. They didn't give up. In fact after the first quarter they actually played the Celts even which at this point you take right? Their young point guard looked good

and this was a one possession game late in the fourth quarter. So they couldn't exactly guard Gordon Hayward to save their lives, that happens, but as a Cavs fan you have to love the effort and maybe if Cedi doesn't go 4-13 you win this game. The Cavs are one of those teams where they'll play you tough because Thompson and Love are still forces, but they don't exactly have the depth to get over the hump. That's fine though, because this season is about being competitive and developing young talent, which we saw last night. Garland stunk out loud, but he's a rookie that shit happens.

You may not have to like them, but the Lakers have won 6 in a row and have the best record in the NBA. Those are just the facts. Not the Sixers, not the Clippers, not the Bucks, the Lakers. To get to that point they've been riding LeBron because despite this being Year 17 the man is on a mission. Three straight triple doubles and he only took 19 shots, that's impressive no matter who it is

shit they didn't even need a great outing from AD who mostly struggled going 6-15, but my guess is he'll get a pass because he's fucking AD. Outside of the massive comeback, Lakers fans have to be excited about what they saw from two of their most important players on the second unit

and I'd say dropping 70 second half points as a team is fairly decent. It certainly helps starting the fourth quarter on a 28-6 run or whatever the hell that was, but all those concerns we may have had about their shooting and their defense and all that shit clearly doesn't matter if LeBron is just going to dominate people like this.

For CHI, fuck you. I get it, you're young and you stink but you cost the entire internet an opportunity to clown on the Lakers and their fans and for that I cannot forgive you. Get your shit together for me one time, you're playing at home with a 17 point lead. We saw this in the preseason where the Bulls couldn't stop blowing fourth quarter leads and it's most definitely translated into the regular season. I'm pretty sure in their 6 losses like 4 of them came in games they had a fourth quarter lead. Clean it up.

Now, if you're a sad Bulls fan right now given everything going on in that city, maybe this will help distract you

No? Yeah it wouldn't work for me either.

When two of the leagues best defenses go up against each other, you know it's going to be a rock fight and that's what this was. Both teams shot like shit for the most part, but I have to give it to OKC, their backcourt is very, very intriguing to start the year

CP3 actually looks engaged and committed, and SGA is developing into a stud right before our eyes. Maybe this is why the Thunder might go in a different direction at the deadline and actually keep Paul. They aren't half bad for starters, and then you have your franchise player able to learn from an all time great PG. Not the worst idea in the world.

You sprinkle in a little Gallo

and some lock down 4th quarter defense (15 points), and that's how you secure a much needed home win.

For ORL, look 39/13% shooting isn't going to get it done on the road, but there are still positives to take away from this loss. For example Markelle Fultz definitely looks like an NBA player so that's good

he's still so raw but he's so long and so athletic I feel like he's going to be really good in the not too distant future. Then you also had Aaron Gordon starting to look like a guy getting back into his normal form and not the worst player in the league which was nice

and like I said the Magic's defense for the most part was nails. It's good to know that even on nights when you shoot like dick you can hang with good teams simply because of your defense. Next time don't only score 41 second half points but that's all part of the process.

Perhaps the Heat were due for a game like this given how awesome they've started the season. Their rookies in Nunn and Herro looked like rookies combining to shoot 5-18, Jimmy Butler had a real rough 3-12 performance and outside of Kelly Olynyk nobody really shot the ball all that well

things started close after the first quarter but then the Heat never scored more than 21 in any quarter and finished with 36/31% splits. There's certainly no shame in losing to DEN, especially at the Pepsi Center, so in the end I'd just chalk this up to an off night for MIA. Their defense is still legit, but when nobody can hit a shot you aren't beating this team on the road. Simple as that.

For DEN, they needed a blowout win big time. With how good their conference is the Nuggets have been looking a little shaky as of late and to get it all while Jokic only shot 4-12 is a great sign.

What's annoying though is despite this game being well in hand with a ton of time left, we got almost no MPJ. How on earth is it acceptable to play him only 3 minutes in a blowout? That's messed up. Guess what he hit both his shots too so maybe give him more time Mike Malone you jerk. I mean they lost Millsap

and you can't find more than 3 minutes for MPJ. Insulting. Why on earth would anyone want more of this

The win was big though because it helped them keep pace with the Lakers, and as it stands now DEN is in the 2 spot in the West which should feel familiar.

And that's it! You're now all caught up with everything that went down last night in the NBA. We're back tonight with 9 more games tonight and as always if you can't watch just check back in the morning. Have a great Wednesday!