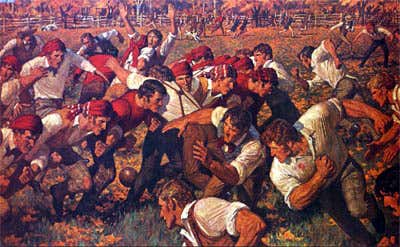 On the banks of the Raritan River in New Brunswick, New Jersey, a new sport is born as Rutgers, and The College of New Jersey play what is hailed as the first College Football game. The rules of the game more resembled soccer and rugby than what would become modern football. Each goal would complete a game, with the winner being determined by who won the most of ten games. Rutgers wins 6-4.

With the game taking place on the campus of Rutgers College, the games were played by the rules set by Rutgers. These were the rules of variation of the Football Association Rules from London, outlined in 1863. There were two teams of 25 players, and they advanced the ball by either kicking or batting it forward. Carrying the ball would not be allowed until 1874. Two players on each team were positioned near the goal; they were to get the ball and complete a game by scoring. The attacking offensive players were called bulldogs; there were 12 offensive players on each side. The remaining 11 players called fielders were there to prevent the bulldogs from scoring.

The game began at 3 pm, with 100 spectators in attendance. A soccer ball was used. Rutgers was the first to score a goal, with S.G. Gano and G.R. Dixon responsible for kicking the ball over the line. Each time a goal was scored a game was completed. The contest consisted of ten games, with the team winning the most games, being declared the victor. As the game wore on, Rutgers devised an attack plan called a flying wedge, which men from Princeton had difficulty defending.

When the contest was over, Rutgers was the winner outscoring The College of New Jersey 6-4.

An analytical account of the game appeared in the November 1869 issue of the Targum, Rutgers’ undergraduate newspaper.

“To describe the varying fortunes of the match, game by game, would be a waste of labor for every game was like the one before,” wrote the student re-porter. “There was the same headlong running, wild shouting, and frantic kicking.

“In every game the cool goaltenders saved the Rutgers goal half a dozen times; in every game the heavy charger of the Princeton side overthrew everything he came in contact with; and in every game, just when the interest in one of those delightful rushes at the fence was culminating, the persecuted ball would fly for refuge into the next lot, and produce cessation of hostilities until, after the invariable ‘foul’, it was put in straight.

It was said that the victorious Rutgers team ran New Jersey back to their campus as they were chased back to their horsedrawn carriages and left New Brunswick in a mad rush. The teams would meet again a week later in Princeton. This time they played under Princeton rules that allowed any player that caught a ball on the fly to get a free kick. This was a significant advantage to slower and small players from the College of New Jersey as they won the game 8-0. Years later, the two teams would be given a share of mythical National Championship. It remains the only title ever won by Rutgers.

In the game, Rutgers distinguished themselves from New Jersey by wearing Scarlet turbans and handkerchief; this would lead to the new name the Scarlet Knights. Rutgers and The College of New Jersey, which would officially become Princeton in 1896, played regularly until 1980, with Princeton holding a 53-17-1 advantage. Rutgers did win the last five meetings as the split of division one and Ivy League rules has become a hurdle in the rivals playing during the previous four decades.