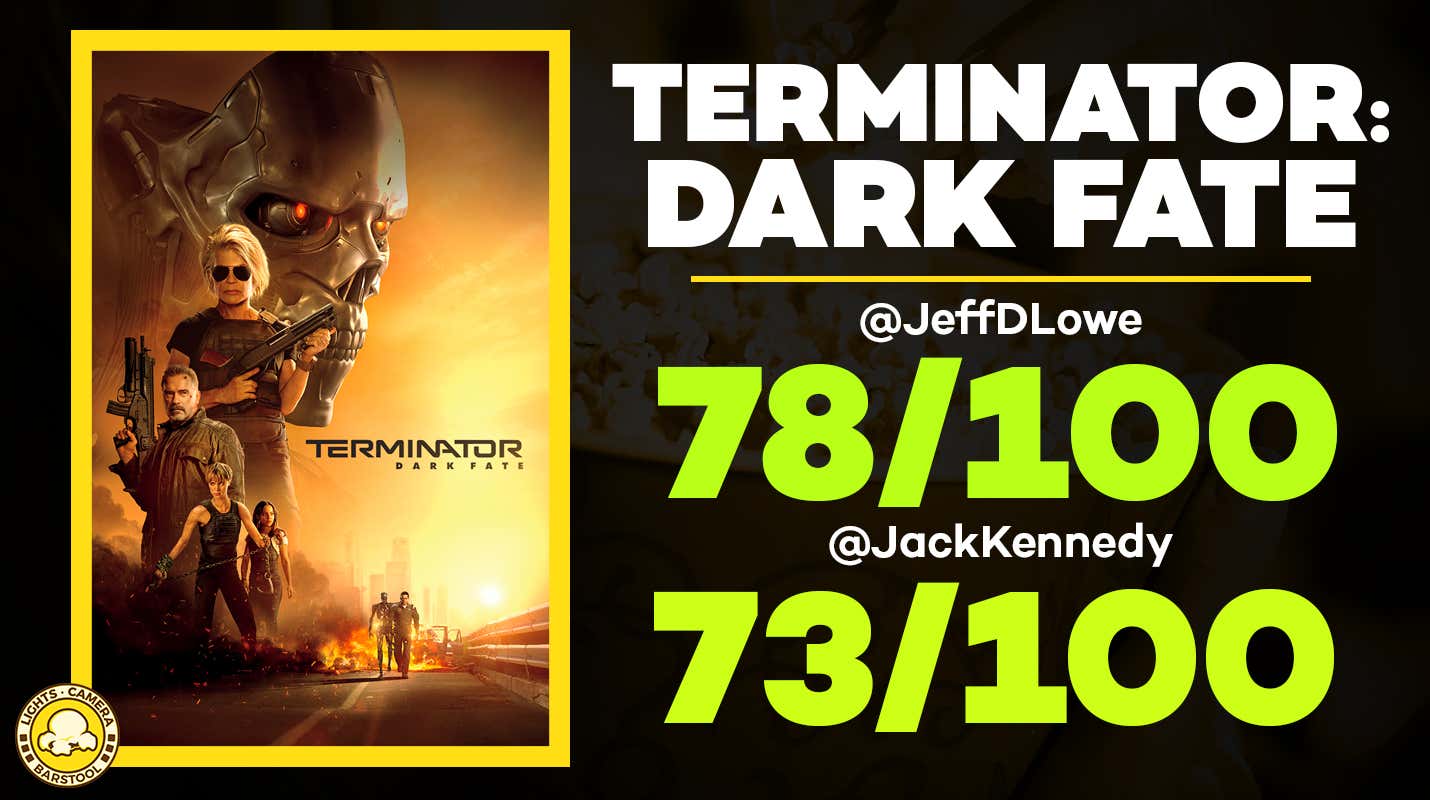 They made another Terminator movie. Many of them have been bad… was this one good?

In Mexico City, a newly modified liquid Terminator — the Rev-9 model — arrives from the future to kill a young factory worker named Dani Ramos. Also sent back in time is Grace, a hybrid cyborg human who must protect Ramos from the seemingly indestructible robotic assassin. But the two women soon find some much-needed help from a pair of unexpected allies — seasoned warrior Sarah Connor and the T-800 Terminator. (via Google)

Jeff D Lowe (78/100): ‘Terminator: Dark Fate’ succeeds at not being a heaping pile of trash, but it will still feel like a big step down from the franchise’s first two iconic releases. After years of sequels, retcons and more, it might finally be time to put Terminator to bed.

Let me be clear off the top, on its own, as a regular movie, ‘Terminator: Dark Fate’ is more than passable and I’d even venture to say it’s close to a pretty good movie. The returns of Linda Hamilton and Arnold (again) are both well put together and done, you’d have thought Hamilton had never left the franchise, to begin with. But as a Terminator movie? Well, I am not sure how it will be received by major fans of the first two movies. Without spoiling anything, which is hard to avoid, there are some story choices with ‘Dark Fate’ that might really irritate and piss of the diehard followers.

Does this matter in the long run? Maybe, maybe not, depending on how you view the franchise, there’s a chance that ‘Dark Fate’ turns you off very early.

It’s a lot of the same in terms of storyline and action when you compare ‘Dark Fate’ to the first two movies. On the one hand, that’s a great thing because those movies are fantastic. On the other hand, it is a little stale and not executed nearly as flawlessly as ‘Terminator’ and ‘T2’ from years ago. The additions of Mackenzie Davis, Gabriel Luna, and Natalia Reyes are all solid, but they only go as far as the freshness of the story takes them.

‘Terminator: Dark Fate’ works but feels all too familiar at times to put it over the top and into the same weight class as the best of the franchise. Luckily for ‘Dark Fate’, it doesn’t have to be the best to stick out from a pack of very bad movies. The newest entry into the franchise is enjoyable and a good time, but don’t expect to feel the same things you did for its predecessors from the 80’s and 90’s.

KenJac (73/100): The tagline the movie uses is correct, ‘Terminator: Dark Fate’ is the best movie in the franchise since T2. There is great action sequences, good special effects, and solid acting compared to the previous installment in ‘Terminator: Genisys’. It’s not particularly unique to groundbreaking despite the re-inclusion of Cameron, but it’s a fun watch for fans of action and the franchise.

The new cast of Natalia Reyes, Mackenzie Davis, and Gabriel Luna were all rather impressive. Luna (interview on LCB coming soon) brought a unique version of the terminator to the screen, neither completely brute force oriented like Arnold nor sleek/smooth like Robert Patrick. Luna’s terminator, the ‘Rev-9’, is something in between. Extremely intense and laser-focused while also displaying some personality in subterfuge moments. Mackenzie Davis is badass as fuck in her role as Grace, a pseudo-terminator sent to defend Natalia Reyes character Dani from the Rev-9. Human emotions with the physical abilities of the terminator is an awesome combination if you ask me. The returning cast of Linda Hamilton and Arnie were both totally fine. Considering the break Hamilton has had from the role, she fell back into it rather easily and Arnie is, well, Arnie.

Like I said before, the action is fun, the acting is solid, and it looks good visually. It’s not overly complicated and it feels sort of quick. That’s what I’m personally looking for in an action movie! Director Tim Miller (‘Deadpool’) also knows how to weave solid comedy into action movies, which he does well here as well. My big complaint is that it’s not overly interesting. From a canon standpoint, this movie ignores all the terminator movies between T2 and now. However, this doesn’t mean that those movies never existed. So, Grace’s character reminds me of Sam Worthington pseudo-terminator from ‘Terminator: Salvation’ and The Rev-9 brings to mind the T-X from ‘Terminator: Rise of the Machines’. And a plot where 2 terminators go back in time to save one person who will father/mother the resistance is obviously not too original either. That said, there are some surprising moments that you will enjoy.

As long as you don’t go into this movie expecting to be surprised by anything, I think you’ll enjoy it quite a bit. There isn’t exactly a ton of great action movies out there right now, and this will get the blood flowing for certain.

—
The movie is not yet Officially Buttered, but we will find out with Trillballins’ and the Audience’s score. We will do an in-depth review of the movie on Lights Camera Barstool later in the week. Make sure to rate all 2019 and 2018 movies in the links below.