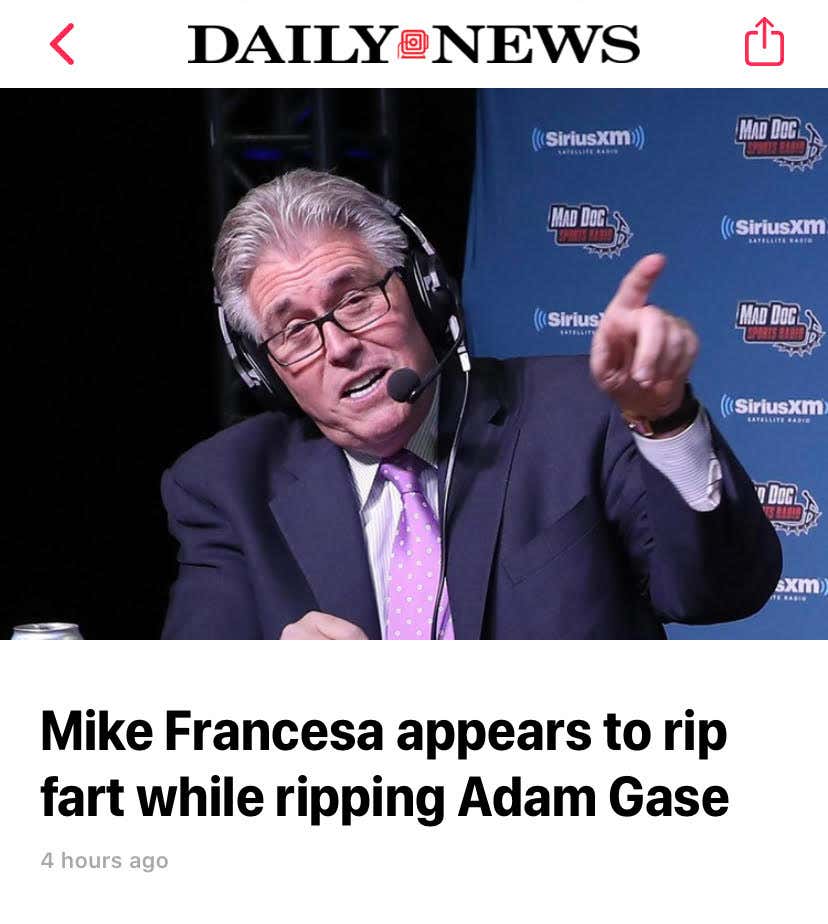 Daily News – Mike’s butt is on. (Allegedly!) The radio host appeared to rip a fart while solemnly calling for Adam Gase’s firing on Monday. Watch the video and judge for yourself; the fart noise comes about 19 seconds in. Francesa vigorously denied the allegations in his show Monday evening, calling this story “outrageous,” and saying that his streaming segments are pre-taped, so he’d never let something like that get posted. “I try to be reasonable,” Mike Francesa said Monday morning. “I understand what their livelihood is, I understand how much time they put into it…especially NFL head coaches,” Francesa said before a long pause. “But [deep breath, alleged fart noise] when you can not function, that’s when you have to make a change…There’s no way in the world that they should lose to a Dolphins team that doesn’t even want to win….and the quarterback is regressing at an alarming rate.” Mike Francesa is right, and he gave Adam Gase’s job status the exact treatment it deserves.

Numbah One almost went Numbah Two while on air. What a moment. We’ve seen Mike fall asleep. We’ve seen him knock over Diet Coke. We’ve seen and heard him do a lot of memorable shit on the air. But a fart…a Mike Francesa, Numbah One fart. My oh my. What did we do to be so lucky?? I mean literally what a time to be alive. Humans have been around like 200,000 years. Radio has been broadcast for over 100 years. And we were alive at the same time as Mike Francesa when he butt sneezed into the microphone. Count your blessings tonight that you were one of the lucky ones who were blessed with this butt sneeze on WFAN.

To be fair, theres no way to truly tell if that was a fart. Unless you’re Mike Francesa’s buttcheeks, theres just no way to be 100% certain if that was a squeak or a creak or some other noise. There’s mics and chairs and all sorts of stuff that can make weird noises that sound like passing gas. Maybe it was barking spiders. Maybe somebody stepped on a duck. In all honesty, we truly will never no for sure if Mike Francesa really did fart that day on air. But, what we do now know…for a fact…unequivocally…is something that we have already known for nearly 30 years…that this man is Numbah One. There is not another radio host ALIVE who’s fart would generate this much buzz. Not sports radio host ever in existence could garner newspaper headlines with his farts. You know when was the last time Michael Kay farted? Because I dont. Do you know if Colin Cowherd farted today? I dont. Nobody can move the needle like Mike. Whether its with his mouth or his butthole. When air is coming out of this mans cheeks – either his face or his ass – its MUST LISTEN material. The Fart Heard Round The World. The Fart that stopped the presses. Michael Kay can parade around his Nielsen ratings or whatever the books for the fall say…but the proof is in the pudding. The man breaking wind is more compelling than any other radio show in New York. Mike can literally say to Michael Kay “I could FART into the microphone and people would care more than they do about your entire show.” Thats something that we have literally, scientifically proven.

Unless of course its a farce fart and never happened at all. Which Mike adamantly denied for a solid 15 minutes on air after seeing the Daily News headline. He was denying his alleged fart as if he was accused of murder. It was like he was being accused of saying the N word the way people were saying Tom Brady did. Mike was VEHEMENTLY rejecting any and all flatulence. And I’m not even talking about just this fart. Im talking about all previous and future farts. Mike was saying not only was it something that never happened, but that its something that never will. And I gotta be honest, even as the number one Mike Francesa supporter on this planet, I cant side with the Big Guy on this one. I mean how can you make that promise? How can you guarantee that you’ll never fart? Its not something you can really control. When your butt wants to fart, it farts. When your butt needs to release, it releases. I believe him when he says he didnt fart. I believe him, yo. I dunno why, but I do.

But any and all future farts? You cannot proclaim you will never cut the cheese in any given situation. Its like promising you’ll never sneeze on air. Some things you just cant control.

I, for one, hope this isnt the last time Mike drops a little Under Thunder. I wish he had claimed this butt burp with pride. Just said fuck everybody, I’m old and I fart. I’m king and I drop heat whenever I want. I hope he farts every day. Every broadcast. I hope he drops some Whoppers on us during his victory lap for a career at the top for 3 decades. Literally shitting on his competition on the way out there door to remind them he dumped all over them for 30 straight years. Play a little butt trumpet, Mike. Get cocky and play the Butt Tuba. Let out some loud ones. Rip ass. You’ve earned it. #NumbahOne

PS – This is the BIGGEST “Whoever denied it, supplied it” of all time. Nobody was even in the room for him to retort “whoever smelt it dealt it,” either. He’s alone on this one. Big time Fart Truther, Mike Francesa is.

PPS – Follow @BackAftaDis for any and all Mike Francesa clips. He’ll have the footage of him melting down over the fart headline.