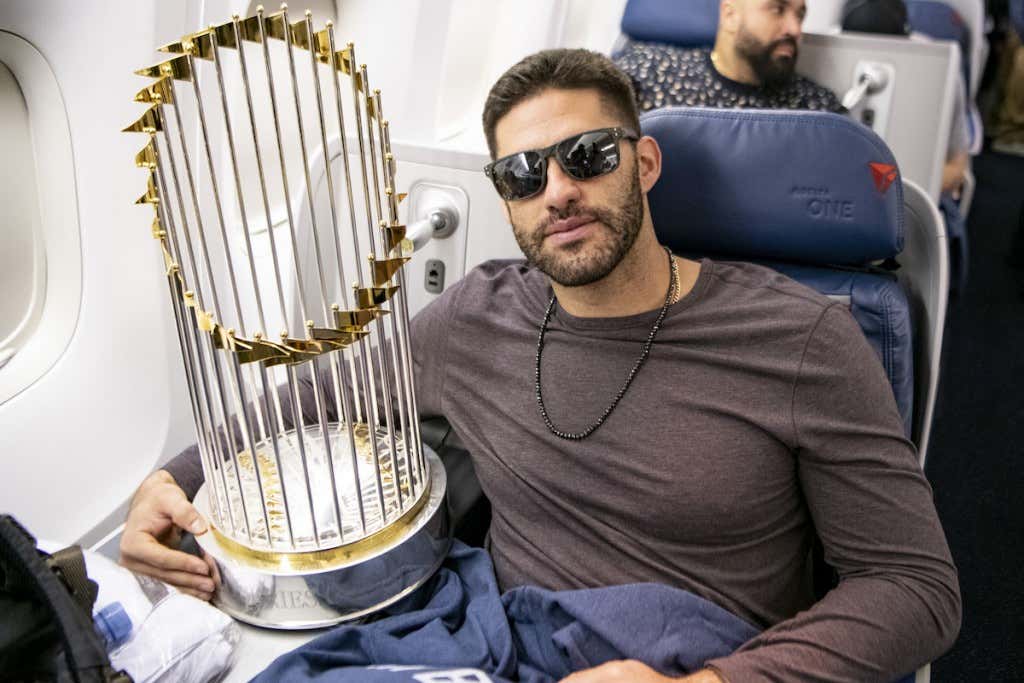 I really had no idea. Wasn’t sure. It honestly felt 50/50 to me. Of course, it’s no secret that there’s a relationship between said player and speaking blogger, but I never pry about that stuff with guys who we have a relationship with. We try to maintain positive relationships with players because they’re fun to have on the podcast and do video content with.

That’s a huge benefit for us to differentiate ourselves from the beat guys that use breaking news as a form of currency. Ours is podcast and video content. Breaking news is cool and all, so if they wanna share info with us, that’s great. We’ll take it. But I don’t feel like it’s the right call to ask for it, thus I had no idea.

But now that JD Martinez has chosen to opt in with the Red Sox for the 2020 season — reminder that he has another opt-out after 2020 — I can’t help but think about this quote from the end of the season.

“I don’t mind moving around,” Martinez told the reporter. “I kind of like it.”

My honest opinion of what happened — I think JD wanted more money, because — well, shit. He deserves it. I also have reason to believe that if Dave Dombrowski were still here, that some sort of an opt-out, extension-type deal would’ve taken place. That’s just my guess. But when you have Scott Boras as your agent, you trust that all avenues were pursued before making such a decision. It should also be noted, of course, that the Red Sox can still rework JD’s deal if both sides would like to do so.

That means kicking the tires with potential suitors like the White Sox and Rangers, and asking whether or not they’d be able to exceed the remaining three years and $62.5 million remaining on JD’s deal. Because he’s still here, we can make an educated guess that the potential suitors either said that they would not, or that Martinez and Boras didn’t feel confident enough that they would.

If you recall, Martinez’s last run at free agency didn’t go as planned. Boras was looking for a deal upwards of $200 million, and then “settled” for $110 million over five years. Free agency wasn’t kind to Martinez last time around, and now he’s two years older and viewed more of a DH-type now than he was prior to 2018. He’s owed $23.75 million in 2020, and then he’s got 2021 and 2022 at $19.375 million each if he forgoes his second opt-out following next season as well. If he didn’t opt out after 2019, then it seems reasonable to believe that he’s not going to opt out after 2020, either.

Now, all that being said, I still don’t think this guarantees that Martinez will be in a Red Sox uniform in 2020, which sucks to say. I want him here. Everybody wants him here. He’s one of the best offensive producers in the game, and he makes the hitters around him better, which is invaluable. Ask them yourself. But the Red Sox have some very important decisions to make. All of them, actually, since this wasn’t a decision that they could’ve made themselves.

If they’re trying to cut payroll, then Martinez’s name is almost guaranteed to come up along with the likes of Mookie Betts, and even starters like David Price, Chris Sale and Nathan Eovaldi, who have all been linked to the Texas Rangers. Players themselves have even spoken on the matter that they don’t foresee a scenario where both Mookie and JD are back in 2019. That’s just the writing on the wall that we can all see very clearly.

Betts, of course, is one of the best players in baseball and he’s the youngest, therefore he would fetch the largest return in terms of talent coming back. That doesn’t mean you have to trade Mookie. In a perfect world, the Red Sox would be able to pay Mookie to stay, but the outfielder could not have made his stance more clear that he wants to explore what the free agent waters have in store for him. That’s fine. He’s earned that right, but it puts the Red Sox in a very tough spot.

Sure, they could trade JD in a deal that wouldn’t make them a better team if only just to get the DH’s roughly $24 million off the books, but then what happens if you lose Mookie to free agency a year later anyway? Now you don’t have either? Fuck that. As much as you’d love to keep Mookie, that’s an incredible roll of the dice that you’d be able to retain him in free agency, because if you don’t, then you miss out on an opportunity to restock your farm system in exchange for a year of his services. That, and you would’ve traded someone else to lower your payroll, so now you’re out two impact players instead of one.

It seems like Boston’s best bet is to hope that the Rangers are aggressive enough to take on a contract from the rotation versus weakening the lineup immensely by trading JD, or even worse, flipping their franchise player for prospects that for all we know, might not pan out to be anything.

For now, JD is back. Mookie is still here. But Chaim Bloom, I do not envy your current position, because while your intentions are good — building the next great Red Sox team to hopefully win a World Series — the moves you’ll have to make in order to accomplish that, all while satisfying the payroll expectations of ownership, are going to upset some folks around here. In Chaim we trust?