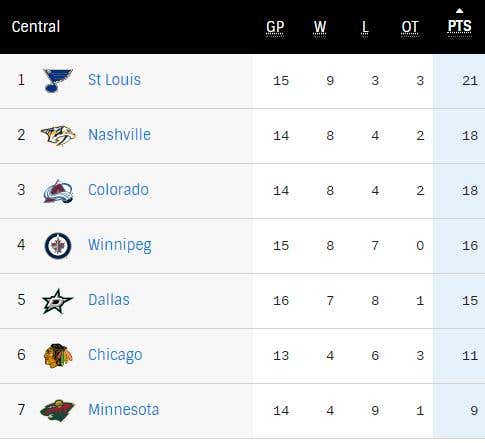 Nobody wants to see the Blackhawks down towards the bottom of the Central Division and out of a playoff spot. I didn’t expect the Blackhawks to be where they are in the standings at this point in the year. I believe in the names on this roster. I believed that all the positive things from last year would carry over into this year and adding guys like Corey Crawford, Robin Lehner, Calvin de Haan, and Olli Maatta would allow the Blackhawks to win more games 4-3 this year instead of losing 5-4 like they did last year(or sometimes 7-6). What I didn’t expect was to see the Blackhawks coaching staff try to turn the Hawks into the Islanders.

In theory it’s fine. You play it safe. You limit turnovers. You try to protect your defense and goalies from odd man rushes. And eventually with a good power play and enough special plays you can win games by having your star players make enough special plays over the course of a season to grind your way to the playoffs with great team defense and some boring hockey. Well FUCK that. I don’t want to see the Blackhawks play that way. And they shouldn’t. Quite frankly they don’t have the speed required anywhere in the lineup to be an elite forechecking team. That’s why you saw what you against the Preds. If you try to chip and chase against that team they’re Defense are going to win races 90% of the time and it’ll be back in your zone before you know what hit you. I am sure dumping and chasing looked great in training camp inter-squad scrimmages. It’s a good strategy when you’re going up against a slow defensemen and defense that don’t have a ton of skill.

If the Blackhawks want to win they need to do what they do best and that is control the puck, attack the blue line with speed and possession and run and gun teams. Make it a shoot out and have fun. That’s what the Blackhawks have evolved into. And last night we finally saw a little bit more of it. Watching the Blackhawks play the Ducks was actually fun. They had the puck more, the power play was humming, and they did enough good things to deserve to win in OT.

This team has all the skill they need to try and be an offensive juggernaut. Boqvist might be just the guy to add enough offense to the blue to make this thing cook.

This was a FILTHY snipe, but the entire sequence made me hard. Toews attacking towards the net and battling to retain possession. Nylander picking it up behind the net and finding Adam Boqvist who was drifting down to the tops of the circles. It was beautiful.

The Blackhawks Power-play finally looked competent last night for the first time all year. They cashed in. I don’t want that to take away from what they did 5 on 5 though. They played a pretty complete game. Especially through the first two periods. That is the type of hockey we want to see. Puck possession and creating quality chances in the inner slot. Just look at the heat map from last night via Natural Stat Trick 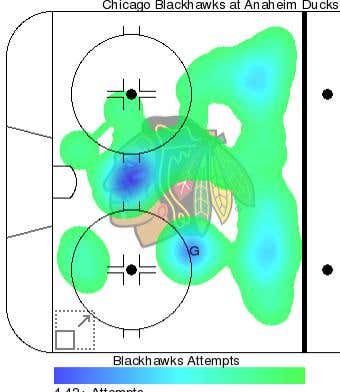 That’s what you want to see. That deep blue right in front and then the Alex Debrincat zone off to the bottom of the circle. They were creating and they looked more like the team we saw last year offensively, and that is a good thing. The combos matter. Debrincat-Strome-Kane played together all night and it was easily the best game they’ve had all year. Toews had his old friend Saad on a wing and Nylander on the other…that group had the puck all night. And when you have 19 and 88 going, through them all things are possible, even a road win on the second half of a back-to-back

Toews and Kane aren’t done. They aren’t washed. They care as much as ever and they’re still as good as ever. They just need to be unleashed. They need to be allowed to be themselves. We saw Toews working hard in deep defensively, supporting his dmen, and being there to start the breakout from the bottom of the circles and then flying up the ice. It was a sight to behold. And he was getting those passes from a dman who knew what to do with it and when to join the rush himself. Adam Boqvist had been very good through two games. Last night he had 15+ mins of ice time and I wanted more. He drove possession. He was dangerous and he is fucking fun to watch. This team has enough talent. It’s about putting them in the right positions and deploying them with the right game plan to succeed. It’s about letting them be themselves. This group has enough gas if the coaching staff gets out of their way.

PS: The bottom 6 is still a bit of a mess. The problem is that Kampf and Carpenter are both 4th line type guys who are going to get too many minutes. Last night Hawks had Dach on a wing with Kampf at center and Kubalik on the opposite wing. That’s too much ice time for Kampf and not enough help for Dach.

I’d love to see Sikura get a call up and a chance to play with Dach. Kubalik-Dach-Sikura. Sikura had a hat trick in 6 mins total time last night.

Nobody else, Smith, Caggiula, etc have done enough to earn a consistent spot in the lineup. Sikura gives Dach another playmaker to give the offense a jolt. Might have to sneak Smith through waivers

PPS: I don’t know what you do with the defense once Murphy is healthy in a couple weeks. Murphy would make 9 NHL defensemen and you absolutely can not send down Boqvist the way he has played. He’s definitely one of their top 6 defensemen.

Maatta and Koekkoek the scratches and Gilbert back to Rockford. The only other solution is moving someone out via trade or waivers because they can’t carry 9 defensemen. It’s kind of crazy that the Blackhawks are a team trying to win and if they go with the lineup I want then they’ll have at least $13.833M in healthy scratches. Woof.