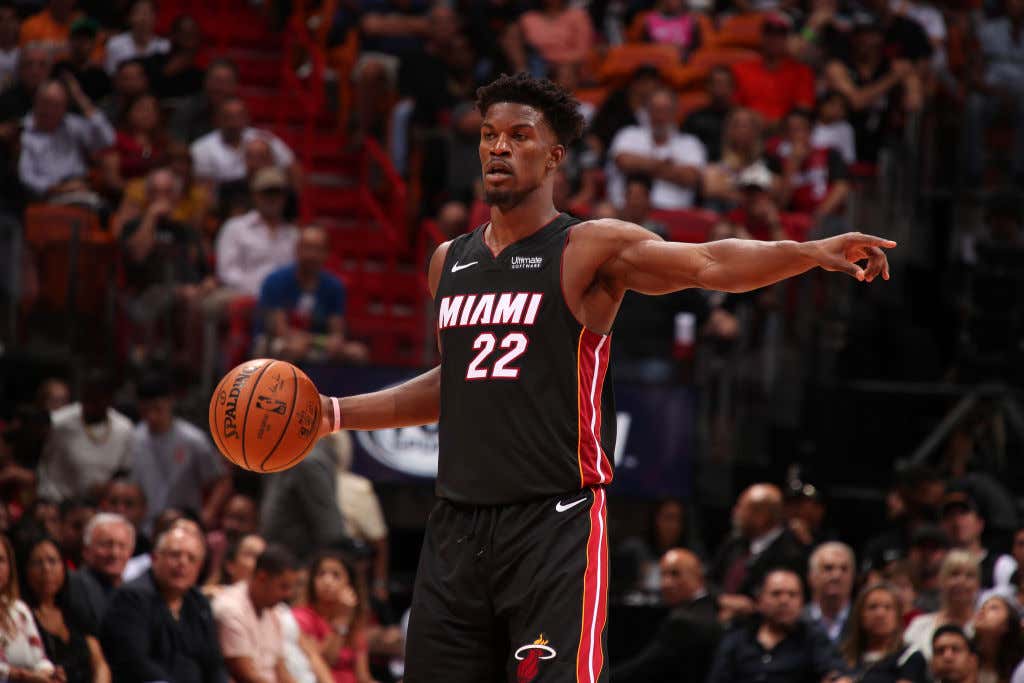 (Yahoo Sports) - When Jimmy Butler chose to sign with the Miami Heat on the first day of free agency last June, it caught some basketball enthusiasts by surprise.

Instead of joining a team with another star and forming a title contender, the four-time All-Star elected to relocate to South Florida for a four-year, $142 million contract.

It was a move largely perceived as abandoning championship aspirations in favor of basking in the sun with little to no pressure of winning.

“I tried to get to Miami earlier than June, if you remember me coming out of Minnesota,” Butler told Yahoo Sports, referring to his trade request last season. “So, people are overlooking all the facts.”

Butler views the reaction to his free-agency decision as disrespect, and he’s now relishing in the team’s early success.

“Mother------s act like I’m not a good basketball player,” Butler told Yahoo Sports. “Like for real. Just think about that. Like I can’t come in and make a huge difference. I’m not going to say ‘carry a team’ because nobody can do it by themselves and I mean that. I’m not putting it all on myself, but I know what I’m capable of. I know what I bring to any and all situations, and the group of guys that we have is the group of guys that I want to play with.

With all due respect to Jimmy Butler, who the hell is he talking about? Who is of the belief that Jimmy Butler is not a good basketball player who can make a real impact? Look at what he did in CHI, then the fact that he carried MIN to their first playoff appearance in like 14 years. Shit he was even legit in PHI as their clutch time scorer who played a role in that team winning back to back 50+ win seasons which hadn't happened since the 80s. Everyone with a brain knows Jimmy Butler is good at basketball so I'm not exactly sure where that's coming from.

Now it's true, when all that shit went down in MIN, it was the Heat that were Butler's preferred destination. You'll remember at the time they didn't want to trade Josh Richardson for him.....who they eventually traded a year later but whatever.

At the time it made sense, Pat Riley may not get a lot of boners nowadays but he definitely still gets hot and bothered for star NBA players. Learning that both sides were interested in one another seemed like a formality more than anything else. But as we know Butler ended up in PHI and Sixers fans were quick to tell you The Process was now complete for the fourth time and they had their roster to get them to a title. Granted they lost in the second round again despite going "all in", but Butler seemed to embrace Philly and him accepting a max offer this past summer seemed like a no brainer. Apparently though, things weren't as positive as we may have thought

“Stuff just don’t work out. Nobody knows what really went on in Philly and we’re going to leave it that way,” Butler told Yahoo Sports. “But it was a great opportunity for me.”

Butler was pressed on what happened, but refused to shed more light on the situation.

“Just go with your gut. You’re not dumb. All of that will come out whenever it’s time,” he told Yahoo Sports. “Right now is not the time. I’m locked in with this. I’m happy, man. I’m smiling and my guys want me to be here, my organization wants me to be here, I want to be here and we’re going to ride this thing until the wheels fall off. I’m not saying Philly wasn’t great, man. We had some really good players. I talk to Joel [Embiid] damn near every f-----g day. It’s a brotherhood, man. I love that guy. I’m going to always have his back and I know he’ll always have mine.”

What a tease, just drop the bomb! Was it Simmons being a dick and not willing to accept Butler being an alpha? Was there shit with Brett Brown? You can't be out here dropping those sort of hints and then not spill anything. This is the same man who orchestrated a whole practice blow up only to immediately go on TV and talk about it. Jimmy Butler LOVES drama so I found this part rather disappointing. In the end Butler turned down 5/190M from Philly to sign a 4 year max in MIA and currently the Heat look to be one of the better surprises in the conference.

Self motivation isn't exactly a new concept with NBA players, but this just made me laugh. I think most people thought the second Butler ended up in MIA it made them a legit 3-5 seed caliber team. They've started off better than most thought mostly because guys like Tyler Herro and Kendrick Nunn have shown to be much better than expected. I think we all thought Butler would do well in MIA's system and honestly he hasn't even really gotten it going yet (14/7/7 on 38/30% splits) and they have been nails. It's clear he's impacting this team in other ways just like most people thought. Maybe some butthurt Sixers fans thought he would fade away and be irrelevant, but given their 5-0 start I'm of the belief they aren't spending too much time worrying about not having Butler on their roster.

But yeah, nobody thinks a 4x All Star and a fringe All NBA talent isn't a good basketball player. That just doesn't make any goddamn sense.