I don’t want to talk about the Bears anymore. The season is over. The long term future looks bleak. It’s hard to imagine the Bears getting things turned around without changes to the current head coach and quarterback. People have been complaining all year about how the Bears have NEVER had a good quarterback. I blogged it in a sense when I wrote last week how Mitch Trubisky was not 9th all-time in Bears passing leaders. It’s not true though. We did have a good QB here. We had Jay.

We had Jay for eight years in Chicago. Which is longer than any coach had him. Cutler played for Lovie, Marc Trestman, and John Fox. He also had 6 offensive coordinators in those eight years. Ron Turner, Mike Martz, Mike Tice, Marc Trestman, Aaron Kromer, and Adam Gase. No cohesion, new terminology every year, a guy who insisted on trading Greg Olsen who is still one of the better TEs in the league because Olsen didn’t “fit the Martz system”.

Cutler is the girl in your past who got away. The girl you loved more than any of them since, but circumstances worked against you. Maybe you were long distance, maybe you were too young and immature, maybe you were too dumb to realize what you had and hold on for dear life. Whatever happened, you look back and think of what could’ve been. It’s half smiling about the good time and half heart ache as you know your current situation just won’t ever be as good.

It’s one of the most bizarre career’s in Chicago history. The Bears could NEVER protect Cutler the right way. The offensive line was horrendous when he came to Chicago. He got sacked a zillion times. He was tough as nails. And then in the NFC Championship against Green Bay he got a mysterous injury, say on the sideline, and gave us this face for the entire second half 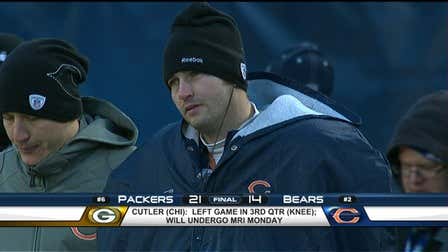 Baby fat, head phone in, no chance of going back in the game as the Bears melted away against their biggest rival in the biggest game. Everyone has that memory seared into their brain, but it’s not an accurate reflection of his time in Chicago or his toughness.

In 2011 the Bears were ROLLING. 7-3. Offense was good with Cutler and the old guard defense was still good enough to make the Bears contenders. Cutler throws a pick, tries to make a tackle, breaks his thumb. Out for the year. Bears lose 5 straight after that game and finish 8-8 and out of the playoffs. How different is Cutler’s legacy here with another playoff run? Not that there is a good time to get hurt, but Cutty always seemed to get injured at the worst possible time. That’s just bad luck.

People constantly criticized Cutler for his lack of leadership. He didn’t get along with Urlacher, allegedly. People looked at his sulking, his I-don’t-carrrreeee sulking demeanor, and labeled him as a guy who couldn’t or wouldn’t lead. Then when he left we saw posts like this

Name another guy making 100 million who calls their rookie right guard every morning at 6AM to make sure that he’s on time for work. Name another Quarterback that shows up at your house on an off day just to make sure you’re behaving. Name a quarterback that will grab you by the collar and pull you out of a brawl in your first game in the NFL. Name a friend honest enough to tell you what you need to hear and not what you want to hear. I have that friend in Jay and I will never forget the things he did for me. I learned a lot from you dude. You have a pretty kick ass family too!! @kristincavallari

Jay threw a ton of picks. We remember some of those back breakers. The ones that killed drives and made you want to puke. Jay didn’t throw picks because he didn’t see what was going on though. He threw picks because he was trying to make plays. Trying make shit happen. He was a gunslinger and a fucking DUDE. That’s what I loved about him. It was a roller coaster with him, but you knew that at his best he always gave you a great chance to win. You know he was out their trying.

I’ll miss the dude. Greatest QB in Bears history and nobody really appreciates him properly. A victim of circumstance here, just like all of us. I wish we could go back in time, use the 3rd pick on Christian McCaffrey, and have Jay Cutler be the guy pulling the strings as the QB for the 2018 Bears. Cutler probably wins a super bowl with that team. Instead, we are once again staring a long bleak cold midwinter with no hope and only memories.