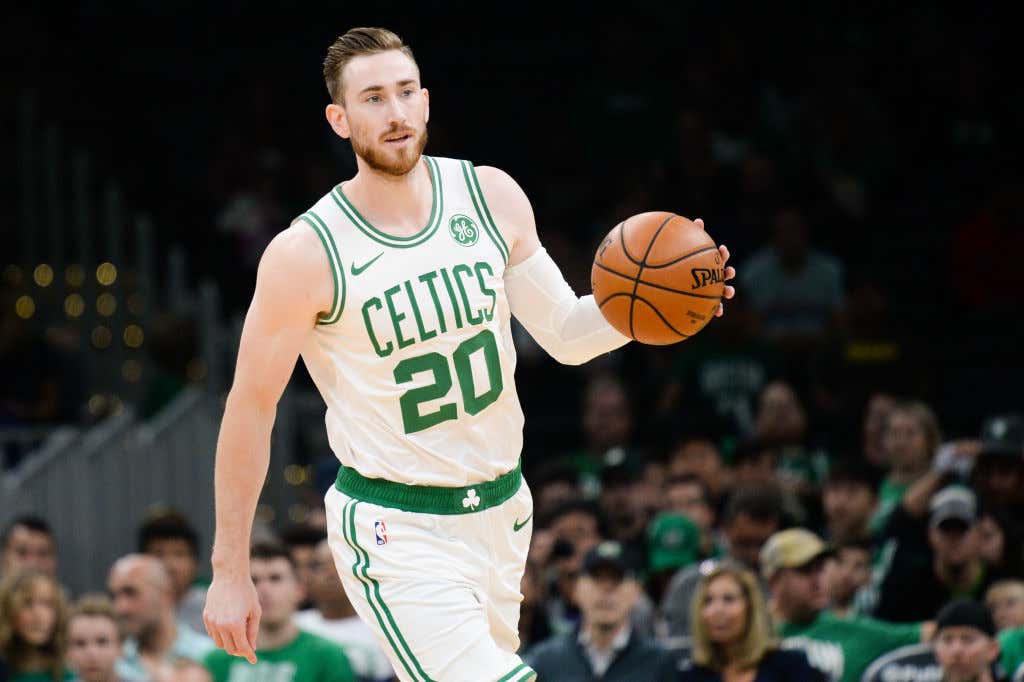 Heading into the 2019-20 Celtics season, one of the biggest question marks on the entire roster had to be Gordon Hayward. So much of the Celtics potential success heavily relies on what type of Gordon Hayward we were going to get. After what was an inconsistent return to action last year and an absolutely abysmal playoff run, you could have told me anything when in it came to Hayward this year and I would have believed you. He would look fantastic after a full season of 100% healthy training? Sure. He would never get back to the UTA version and we just had to accept a player that was 60% of what we expected when he first signed? Yup, makes sense. At this stage of the season we're just looking for trends, both positive and negative. Absolutely nothing is set in stone and a 5 game sample isn't large enough to form final opinions or anything like that, but the more you watch from Hayward the more positive trends you see.

Start with his averages.

Right off the bat the production has been a whole lot better with roughly the same usage. There is one major difference though when you compare Hayward's role this year to last season. He's touching the ball way more. Last season he was 5th on the team in touches at 45.5, this season that number is 61.6, which happens to be the 3rd most on the team. The difference is last year we were at times frustrated that Hayward was so involved while he clearly wasn't himself. Now that he looks more confident and healthier, him touching the ball this much has been mostly a positive. We're seeing the same sort of playmaking that makes Hayward a valuable option offensively, but the real change in these additional touches is coming where the Celtics need Hayward most, and that's scoring the ball.

Last year, one of the biggest surprises at least for me was the fact that Gordon Hayward couldn't shoot to save his life, especially from three. It felt like he was forcing things a little from behind the arc, almost in an effort to prove he was really back. His 36% 3PA rate was the highest of his career while his 33% from behind the arc was the second worst Hayward had ever shot at the NBA level. That is not a combination you want to see. This season though, we haven't gotten that same sort of approach from Hayward, he's 3PA rate is down to 27% and his percentage has skyrocketed. Why? Well because Hayward has been about a BILLION times better when it comes to open looks. He's shooting 60% from three when wide open compared to the 36% we saw last year. That alone is enough to make anyone look so much better. It should be stated that Hayward has the highest TS% of any starter and is the highest of any regular rotation player. That's a welcomed sight.

But the change with Hayward hasn't just been his improved outside shooting. We're finally seeing that level of aggressiveness we craved for last year. Hayward is 3rd on the team in FGA in the restricted area (4.4), 4th in FGA in the paint (2.8), and is 2nd on the team in drives (12.0) trailing only Kemba Walker. Considering Hayward drove the ball on average just 5.7 times last season, there's no arguing his offensive approach has drastically changed. Maybe part of that is the fact he feels quicker and more confident in getting past defenders, and this is all while he still isn't really getting to the line yet, with a FT rate of just 21%.

You look at Hayward's on/off splits from last season and the team was basically the same. A net rating of +5.2 when he was on the floor and +4.1 when he's off. Fast forward to this year and that's not the same story, a +5.1 when he's on compared to a +2.2 when he's off. What they gain in defense they lose in offense with the Ortg dropping below 100 without Hayward, and considering offense is an issue with this team it gives you an idea how important Hayward is to whatever success they do have. We're also seeing Hayward improve in P&R, where he's jumped from the 61st percentile to the 79th, scoring more points per possession and better FG%. It's no surprise the Celtics lead the NBA in this type of set, because with Kemba and now Hayward they have two legit P&R options. We wondered what would change with the pick & pop with Horford being gone, well the early answer is running things through the ball handler instead and having a ton of success while doing so.

Of course things haven't been perfect for Hayward. He's one of the guys on this team that really struggle in the first half of games. His 5.2 points on 31/37% splits in the first 24 minutes certainly isn't all that good, but at least he's still defending at a high level with a Drtg of 99. Last year we probably see him mentally check out early if his shot isn't falling, this year he's staying consistent on the defensive end which has been a huge plus.

It may just be 5 games, but to be fair we didn't see 5 consecutive games at this level from Hayward really at any time last season. Look at the game log, that's what was so frustrating. He'd look good for one or two games then go back to doing nothing for a stretch of three. Consistency was a major problem for Hayward last year and it played a big role in why the team for the most part looked inconsistent all year. If we can expect this level of Gordon Hayward consistency which you should because it's not like anything we are seeing is all that outrageous, well the possibility of Hayward looking more like the UTA version than the 2018 version doesn't look so out of reach.

As Hayward goes does the ceiling of this team, there's no denying that. And while there have been plenty of pleasant surprises to start the 2019-20 season, seeing Hayward make this sort of impact on a consistent basis to kick things off has to be high on the list. This is more along the lines of the player we all thought we were getting, and we have every reason to think it's only going to get better from here.