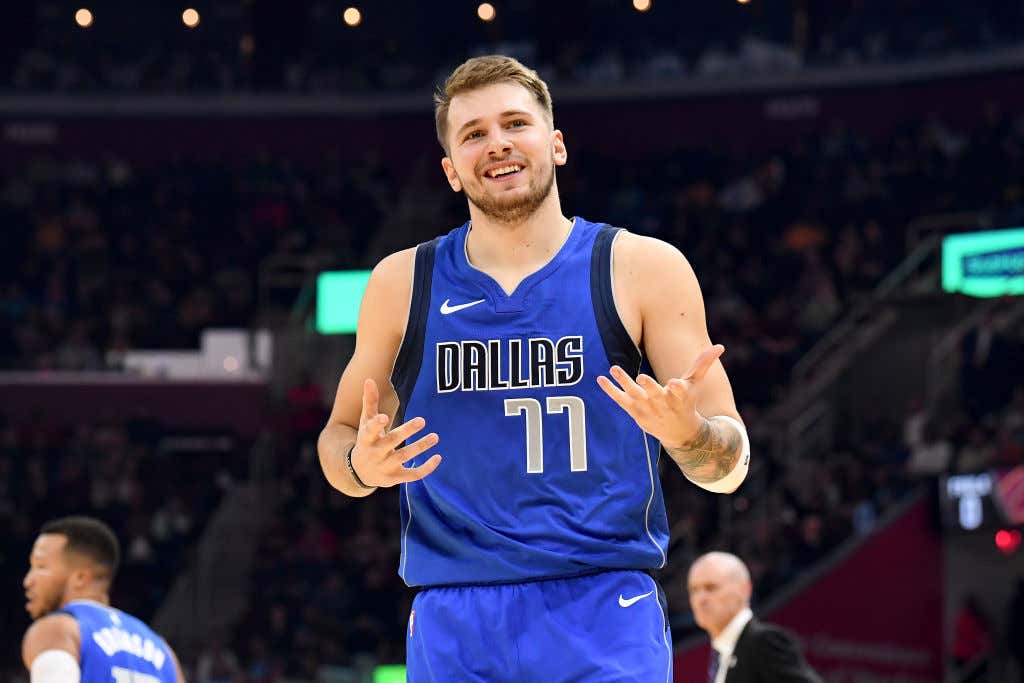 Good morning everybody happy Monday and welcome back to another edition of Last Night In The NBA where we bring you up to speed on everything went down from the night before in then Association. Chances are there's no way you want to start working this morning and maybe you spent the day Sunday drinking and watching football not even realizing that there were 6 NBA games on the schedule. That's fine, that's why I'm here so if you missed any of the action here's what happened

On paper you may say to yourself, there's no way the Pacers should lose this game, they are a much more talented team playing at home. But then you remember that Myles Turner, Sabonis, and Victor Oladipo were all out and maybe just maybe this would be the Baby Bulls chance to steal a game on the road. It's not the craziest thought in the world, but then we learned that even if their best players were out, the two new Pacer they brought in this summer were more than willing to pick up the slack

Another 22/7 for Brogdon on 9-15 shooting, I think we need to give this man his proper due because he's been  one of the best point guards in the entire conference pretty much since the season started. This is a new role for Brogdon, and we are getting a level of usage and play that we didn't really see during his time in MIL and absolutely justifies the price that he signed for his summer. The guard position for IND has really been a mess as of late outside of Oladipo and if Brogdon is able to maintain something close to this level once Oladipo gets back, well then the Pacers really might have something there.

With TJ Warren, you knew he could score from his time in PHX, and on a night where they needed a #1 option he more than filled that role with his efficient 26. The Pacers basically led the whole way and were up 13 at the break and I'd say getting any win you can while 90% of your top end talent is out will always be a good thing.

For CHI, look we all know the Baby Bulls are going to lose a bunch of games, but at least let them have their bright spots like Wendell Carter Jr

a rough night for both Coby White (0-6) and guys like Otto Porter (1-10) and as we know you go on the road and toss up 41/30% splits with 18 TOs and well that's how you lose comfortably to a playoff caliber opponent shorthanded or not. The Bulls have played 5 of their 7 games on the road which feels like a little much, and it doesn't help their 1-4 in those games.

When the Warriors get down like 46-14 in the first quarter we all laugh because they tormented the league for years and we finally are seeing them look human. It's not really their fault though, their roster is depleted. So what exactly was the Rockets excuse for being down 46-14 in the first quarter with their ENTIRE team active and playing normal minutes? Like cool James Harden had 29

but that was pretty much it and he wasn't all that efficient getting that number either. As a team HOU shot 39/29% with 22 TOs and this thing was a blowout from the jump. The outside shooting of Westbrook/Harden is a PROBLEM, but not nearly as much as their defense is. This team is dead last in the NBA in opponents points per hame at 127. You are going to sink like a rock in the West if you can't defend, and last time I checked a healthy Rockets team was supposed to be able to stop someone.

But hey, at least Chris Clemons looked good in his NBA debut!

For MIA, it's getting to the point where you may have to start taking them serious as a potential 3-5 seed team. They're getting great production from essentially their entire roster

Here's something maybe you didn't know. Did you know Bam is averaging a cool 13.8/9.0/5.2 to start the year? 5.2 assists! He's basically been one of the best passing big men all season and he had another 5 last night. What a surprise he's been much like most of this roster so far. You look at the Heat play and they defend, they can stretch the floor, and they have a clutch time #1 option in Butler. Mind you this blowout happened without Justise Winslow as well, which makes it all that more impressive. Hell even James Johnson finally came back from being too fat and even he looked good

You can get off to as bad a start as the Kings did to start the season, things can look so bad that your coach may already be on the hot seat, and it still wouldn't be as bad as what the Knicks are experiencing. If anyone makes themselves feel better about their slow start, it's the Knicks. And for the Kings, a date with them is just what the doctor ordered because it appeared to help the Kings starters snap out of their funk

This was pretty much never close, and it was refreshing to see SAC actually play a lick of defense for once, even if it was against a pathetic opponent at this point they'll take what they can get. Their backcourt had no problems whatsoever getting to whatever spot they wanted, and making 15 threes with only 13 TOs certainly helps.

For NYK, I mean what else is there to say, they stink. We know it, they know it, everyone knows it. It doesn't matter if it's on the road or at home, a quality opponent or someone that's 1-5, they're still going to struggle. Granted, Mook and RJ Barett showed up

they accounted for over half of the Knick's points, but other than that it was pretty gross. Just 40/25% splits and they didn't top 23 points for the first 3 quarter, just not what you want to see unless the Knicks have already started their tanking for the season. If that's the case, fantastic job by them.

Who says you need outside shooting. The Lakers won this game while going 6-24 from three (oh fuck I just triggered myself with that 6-24), and who cares if you turn it over 18 times on the road because nobody seems to be able to stop LeBron and AD

I mean Dwight played a huge role in the Lakers winning this game, he didn't miss a shot, finished with 14/13 with 2 blocks and gave them 21 huge minutes off the bench. It was one of those crazy nights where both Dwight and KCP actually contributed to winning which I'm sure is something the Lakers will take especially on the road against a quality opponent. Suddenly they've won 5 in a row and have feasted on their sort of easy schedule as of late. Now that Kuzma is back as well we're finally going to be able to see how this team looks at 100%

For SA, you can't have off quarters when playing someone like LA, and their 30-18 second quarter ultimately did them in. It didn't help they only shot 39/24% with 17 TOs, and getting almost nothing from DeRozan/LMA who combined to go 7-24 isn't going to get it done no matter who they play in this conference. Fortunately guys like Dejounte Murray looked good

he finished with 18/11/4 on 7-12 in his 24 minutes, and if you can believe it Rudy Gay is still alive and well and still somewhat productive at this stage of his career

but on a night where they needed their stars to show up and match the star power of LAL the Spurs just didn't get it.

I think we can ALL agree that Year 2 Luka fucking rules. Back to back triple doubles

him and Porzingis continue make beautiful magic together

and it's a huge reason why this team is so fun to watch on a nightly basis. More importantly, this was their 3rd win on the road this season after having only 9 last year! If this team is going to be competent on the road this season, you have to take them seriously as a contender for that 7/8 seed. It was really the only reason they missed last year because they couldn't win away from home. They got great production from up and down their roster, shot 53/28% while making 20 threes and only turning it over 13 times. That's how you snag a 20 point blowout on the road

For CLE, you sort of expected this for the most part and the good news is Kevin Love looks great if they want to try and flip him at some point this season

If you look at the numbers their starting five's advanced stats aren't all that bad so there are positive signs even if their young star backcourt continues to struggle (7-22). At this point the Cavs probably have to pick a direction and my guess is bringing in a good return with your two older vets is probably the move at some point. To be honest this game was fairly close almost the whole way, but a huge 41-25 fourth quarter is what made this look so lopsided.

A battle between two teams that many thought heading into the year would be two of the best teams in the conference, the Jazz better hope this was mostly just an off night because woof. Just 39/32% splits, struggle city for a lot of their players outside of Donovan Mitchell

and we saw a fatal flaw with their roster in that they really don't have anyone who can defend these big athletic wings in the West. That's an issue. What's also an issue is how bad Mike Conley has been for this team. I mean, maybe the worst point guard in the West type shit. Another 2-10 with only 1 assist and 5 TOs he has certainly not been the caliber of player the Jazz thought they traded for. How could he be when he basically can't score and isn't creating for others while turning it over a shit ton. That might be the weirdest part of this entire first stretch of the season. I did not expect Mike Conley to stink.

For LAC, it's pretty simply, when Kawhi plays he dominates, and when he dominates the Clippers are going to win

but what's crazy is the Clippers only shot 39/21% themselves so it's not as if the Jazz weren't in this game. In fact they were leading heading into the fourth quarter! But then Kawhi went nuts, they dropped a 40-25 quarter and that was that. LAC remains undefeated at home and gets a huge H2H win that may become valuable down the line. It also helped them keep pace with the Lakers as the only teams in the West with 5 wins.

And that's it! You're now all caught up with everything that went down last night in the NBA. We're back tonight with 6 more games so make sure you check back tomorrow if you can't watch, Have a great Monday!