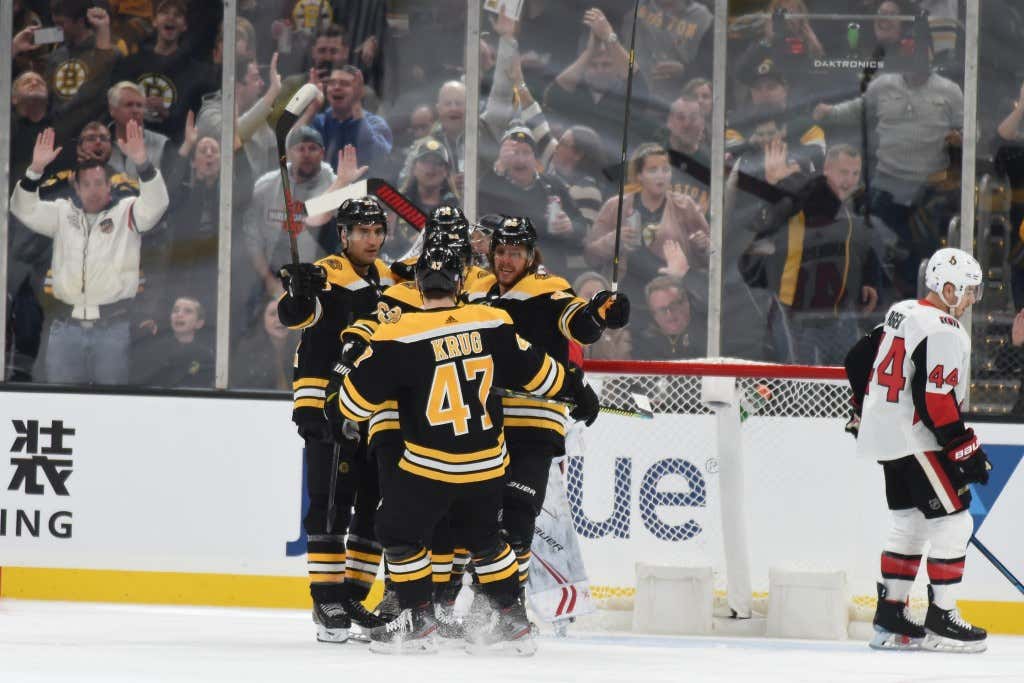 I know the first comment on this blog post is gonna be “oh you were playing the Sens”, but this was such a trap game and yet the Bruins pulled it out in the 3rd, in a 2-2 game by exploding for 3 goals to earn their 5th straight win. The Boston Bruins just keep finding ways to win hockey games and now have points in 9 straight games.

– Early in the first period Scott Sabourin collided with David Backes and was knocked unconscious as he hit the ice. Just a freak accident, he was stretchered off the ice and sent to a local Boston hospital.

– David Backes was visibly shaken up, and left the game. He was ruled with an upper body injury, no update after the game for Bruce Cassidy.

Sabourin gave a thumbs up as he was stretchered off, and the Senators updated everyone saying he “was conscious and speaking with the attending doctors at the time of leaving the arena.” Prayers up to Sabourin for a speedy recovery.

Stop if you’ve heard this before, but the top line once again lit it up – a combined 7 points between the Perfection Line.

– David Pastrnak opened the scoring and added two assists for a 3 point night. Now has a league leading 13 goals on the season. He extended his point streak to 11 games with 13 goals, 14 assists for 27 points in that span. Pasta La Vista, Baby.

But of course he bounced back and scored in the 3rd to extend the Bruins lead to 2. He’s riding a 12 game point streak with 8G, 15A in that span.

– Patrice Bergeron got on the board once again tonight, and added an apple. for his 500th career assist. Now the 6th Bruin in franchise history to reach the 500 assist mark.

– An outstanding penalty kill for the Bruins (with Marchand in the box for 6 minutes). They really fed off that energy from killing that penalty and dug deep in the 3rd to come out with the win. Bruins special teams have been key in this 5 game win streak. 2 power play goals tonight as well.

– Tuukka Rask had a few goals he would’ve liked to have back, but l like I said, he was unbelievable during that big penalty kill. *whispers* he’s still undefeated in regulation.

– It was great to see Danton Heinen and Jake DeBrusk both get on the board. I think adding Heinen to the 2nd line with Krech and JD has done wonders. Just JD’s 2nd goal of the season and Heinen’s 1st 5 on 5 goal, but very encouraging the 2nd line is starting to chip in.

– Brett Ritchie did not play (due to infection) and Peter Cehlarik slotted in once again on emergency basis. Just nothing going for him in either game he’s played up in the NHL. Not sure when it’s going to click for 22. He has the tools and has earned the recall in the AHL, but nothing to show for it.

The Bruins are back in action on Monday night when the Pittsburgh Penguins come to town. 10-1-2 let’s keep it going.