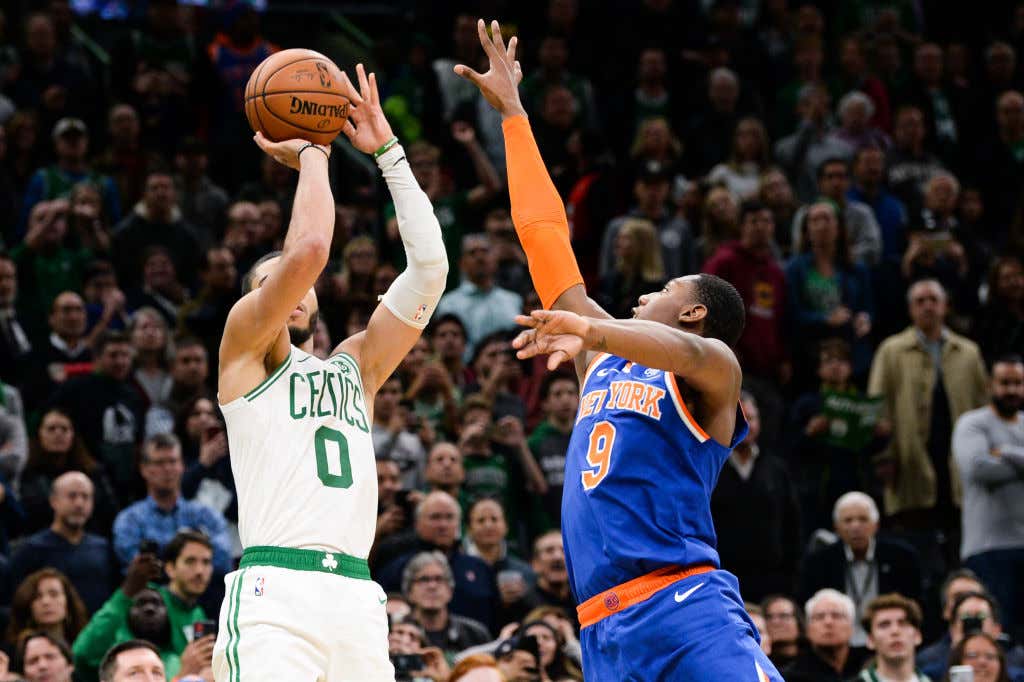 The pessimist in me looks at a game like last night and says how the hell are you going to allow the Knicks to make you sweat like that at home. Even if this was another Hospital Celtics performance with Jaylen and Kanter sitting, for a team that shot 39/36% this should not have been as stressful as it was. But for anyone who watches this team consistently it was mostly par for the course. There's no denying the Knicks played with great energy and answered every single one of the Celtics runs mostly because former Celtic Marcus Morris decided to remind us of the Mook we all once rooted for. This was a game where the Celtics largest lead was 7 and there were 24 lead changes, no quarter was decided by more than 2 points, it was a true wire to wire rock fight so to see the Celtics actually be up for the challenge and not back down is another positive to what has been mostly a fantastic start to their season.

I fully acknowledge that half of their season win total has come against the 1-5 Knicks, but at the end of the day you only play who is on your schedule and so far it's been a mix of legit playoff teams and the Knicks with the Celts looking pretty damn good now winning their fourth game in a row. They keep this level up and then add two key rotation players and who's to say things won't continue to look like this moving forward. Nobody should be planning the parade just because they beat the lowly Knicks, but we're seeing some fantastic signs that not only is this year potentially different, but we're getting leaps from all the right people. Let's discuss.

- You may have thought we were going to start with Jayson Tatum given how this game ended, but as I sat in my bed last night wide the fuck awake with Kool Aid running through my veins my brain kept going back to the play/leadership of one guy.

From a basketball standpoint, it's impossible to not love what we're seeing from Kemba Walker. If you've been living under a rock this is his last three games

He's getting to the line at will with a ridiculous 28-29 stretch over the last two, he's showing up in the biggest moments with huge fourth quarters, he had another 12 points in 7 minutes last night, and most importantly it's very apparently how much he fucking cares. Kemba is flying in for rebounds and snagging them over larger players, he's not forcing things offensively and settling, rather attacking and using his crafty veteran savvy to find his way to the FT, and most importantly he trusts his teammates in huge moments.

We knew what we were getting as a player with Kemba. An All NBA point guard who is one of the best scorers in the entire league. What we hoped was that his leadership and chemistry would come over and save this team in an area they desperately needed. I dunno, you tell me if that's working

I mean…I'm crying. Compare that to the exact same play and reaction we got last year

Night and fucking day. Kemba's officially gotten rid of his early season nerves, and the dude is a legit problem. Feels nice to be on this side of Kemba's dominance for once. Everything I've wanted to see from Kemba, including some good defense(!!!), has shown up in spades through the first 5.

- While that's nice, my heart is singing with joy after watching the development of Jayson Tatum. For the few Tatum haters still out there that want to talk about his FG%, how does 9-17 (4-8) and 24/6/3 work for you

For someone who apparently can't shoot, somehow Tatum is now up to 48.6% with 3.6 3PM on 7.3 3PA on the season. Call me crazy but that seems good. In Tatum's first two years we saw signs of a player that was at his best in the biggest moments. He was every bit the fourth quarter player Kyrie was during his time here, only wasn't exactly empowered to be the guy to take the big shots. Now? He has everyone's full support and he's coming through like he basically always has in fourth quarters. Tatum went 3-4 in that fourth last night and it was the perfect way to end what was a great all around performance.

Defensively Tatum held his own ending the night with a 98.5 rating, he finished with the 2nd highest overall net rating, and its why he finished a team best +12. We're getting a version of Tatum that is committed on both ends for a full 48 minutes, and its made a giant different.

- Honestly as a whole the defense continues to be a major surprise to start the season. The Knicks had a huge advantage in the post yet only managed 39/36% splits and barely got over 100. I'll take that all day and the Celtics wake up today owners of the 9th best defense in the league while giving up the 6th fewest points in the NBA. This was where the Celtics were supposed to be getting killed I was told. Oh well!

- I said it after their last game and I'll say it again here. I will die for Marcus Smart without question.

What if I told you Smart spend his most time defensively on the massively jacked Julius Randle and allowed just 2 points. That's a point guard shutting down a PF for those at home. Then the next guy he guarded the most was 6'7 RJ Barrett who has gotten off to a great start this year. He had 2 points on 1-4 shooting against Marcus. All NBA First Team like you read about.

- Ho hum, just a solid 10/4 for Grant off the bench in 26 minutes. You probably didn't even know he had that many because he just goes about his business and gets the job done. Nothing flashy, just consistent which in my opinion is even better.

- I'm not saying Hayward is officially back, but I will say not only does his burst look a billion times better, we're also seeing him try things on the floor that he wouldn't have even thought of attempting last year for a variety of reasons. Part of it mental, part of it physical, we're seeing an aggressive rejuvinated Hayward that is making big momentum threes and getting his nose dirty on the glass with another 9 rebounds last night

His first half struggles are a bit of an issue nobody can deny that, but the fact that he's not having those performances and then mentally checking out is huge. Instead he's coming out with new life in the second half, he's creating for others and he's actually beating people to spots offensively which didn't happen much last season.

- I don't know where it came from, but Daniel Theis finding a way to snag 4 blocks was rather insane. I'm going to go out on a limb and say that's his most ever as a Celtic and if not it's damn close. With basically no center available on the roster, you have to give Theis credit for holding his own when it came to rim protection.

- All I want in life is for Carsen Edwards to be happy and if anyone needs to see the ball go through the basket it's him. You can tell he's starting to get down about his verrrrrrrrrryyyyyy slow start shooting the ball after his 1-6 (0-4) performance last night and he's even missing some wide open gimme's which I didn't know what possible. I'll give him credit, he is not letting his shooting impact his defense, I LOVE how he gets in the opposing player's airspace basically covering all 94 feet, but man this dude has to start making these jumpers. He's too important to the bench scoring to continue to give them absolutely nothing.

At the same time I don't care if he misses everything, I want him shooting it every single chance he has. He's going to break out of it eventually and when he does it will be glorious

- Tip of the cap to Mook. He was pissed he never got a call from the Celts in free agency and he made them pay to the tune of 29/9. I think we all knew that three with 4 seconds left was going to drop when the Knicks got that offensive rebound once we saw it was Mook who was about to shoot it. That's a play we lived through for two years and one we know Mook makes in his sleep. Even with his shot selection that makes you want to scream, Mook still rules. I just wish the Celts figured out a way to stop him.

- I mentioned it with Carsen, but again the Celtics bench has basically no scorers. Just 21 points from the second unit, guys like Semi can't buy a bucket, you can't expect much scoring wise from guys like Poirier or Wanamaker, and honestly it's going to be a problem moving forward if they don't get any production from this group.

The Celtics are tied for dead last in the NBA in bench scoring with 21.4 points a night on 36.5% shooting. That's bad.

- As a whole, this team is way to addicted to leaving their feet to pass. So many times we see Kemba Walker and Gordon Hayward put the ball on the floor only to then leave their feet without a plan and try some low percentage pass. It's almost always a turnover and it has to fucking stop. You learn to not leave your feet to pass literally the first day you start playing basketball and yet here the Celtics are doing it no fewer than like 7 times a game. Very annoying.

- Much like the first time these two teams played, the Knicks were a problem on the glass and it's why they were able to stay competitive in this game. A total of 16 OREB were a problem and they lead to 20 2nd chance points compared to the Celts 5. In terms of points in the paint the Knicks won that as well 38-34 and the rebounding battle 51-44.

Anyone who watches this team knows maybe the Celts got a little lucky here because when they lose all those areas they tend to not pull out wins. Obviously no Kanter and Jaylen impact those numbers, but even still it was concerning watching literally every Knick live on the glass. It's why they took nearly 20 more FGA!

- Shame on the Celts for not blowing this team out and giving us another Tacko moment like the first matchup. The Garden deserved that.

In the end, 4 in a row is all that matters and with CLE/CHA up next there's no reason to think this can't continue. Last year the Celts lose some of these games to terrible teams and if they continue to play with the type of energy and unselfishness we're seeing so far that might not be something we have to worry about. They'll have off nights like every team in the league, but this group has the look of a team that trusts one another on both ends and at the end of the day is so much more fun to watch. It's early and there's a long way to go but goddamn does it feel nice to a start like this. Now we wait until Tuesday, which by the way is complete bullshit.