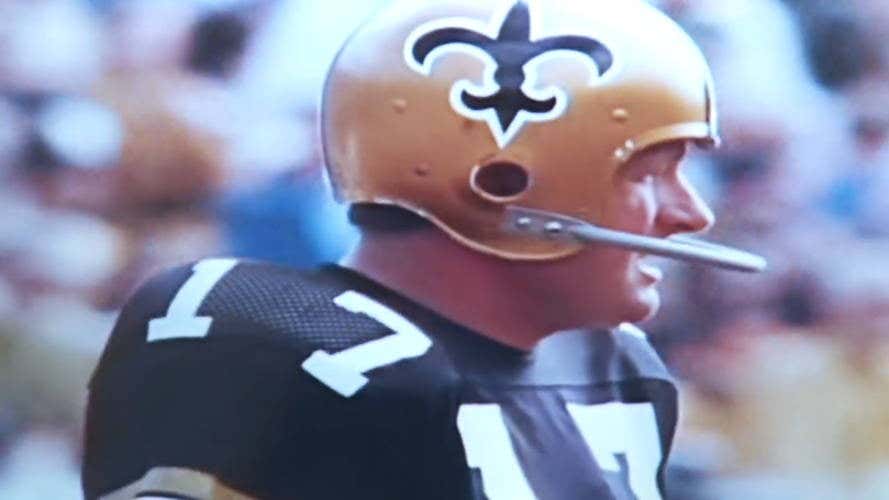 The New Orleans Saints get their first win of the season, beating the St. Louis Cardinals 51-42 at Busch Stadium. Both quarterbacks Billy Kilmer of the Saints and Charley Johnson of the Cardinals pass for over 300 yards with six touchdowns. Coming into the game, the Saints had scored just 54 points over the previous four games combined. The Cardinals would finish 4-9-1 while the Saints went 5-9 on the season.

The New Orleans Saints in their third season were scuffling under coach Tom Fears. Through six games, the Saints were winless, having not scored more than 20 points in any of their first six games. The St. Louis Cardinals were not playing much better for Charley Winner as they entered the Week 7 home game with a 2-3-1 record, with each of their wins coming against the Chicago Bears and Pittsburgh Steelers who both went 1-13 in 1969.

Each team scored in the first quarter, with Dave Parks catching a 25-yard pass from Billy Kilmer and Dave Williams catching a 32-yard strike from Charley Johnson. Williams got a second reception from the 14 to give the Cardinals a 14-7 lead. New Orleans would score the final 16 points of the first half, as Tom Dempsey hit a 43-yard field goal, while Kilmer had two touchdown passes on to Ernie Wheelwright for 20 yards and another to Danny Abramowicz from the five-yard line. Helping the Saints along was a fumble by Cid Edwards.

In the third quarter, the Saints offense hit another gear, as they had three touchdowns, with Don Shy catching a 28-yard pass and Abramowicz catching an 11-yard touchdown pass, while Wheelwright had a one-yard score. The Cardinals meanwhile got a 28-yard touchdown by John Gilliam and trailed 44-21. Dave Parks would grab Billy Kilmer’s sixth touchdown pass in the fourth quarter, seemingly putting the game out of reach at 51-21. However, the Cardinals made a late run, as Charley Johnson had three fourth-quarter touchdowns, matching the six thrown by Kilmer. Two of the passes were reeled in by Dave Williams, who had four scores on the game, while Roy Shivers caught the final touchdown pass.

Billy Kilmer finished the game with 22 of 32 passes for 345 yards, with six touchdowns and one interception. Charley Johnson, meanwhile, completed 20 of 37 passes for 374 yards, with six touchdowns but had two passes picked off. Dave Williams was the game’s leading receiver with eight catches for 164 yards and four touchdowns. Al Dodd did not get any of Kilmer’s touchdown passes, with had a team-best 145 yards on seven catches.

The Saints finished the season strong, winning five of their last eight games to post a record of 5-9, while the Cardinals won just two games the rest of the way, finishing at 4-9-1.