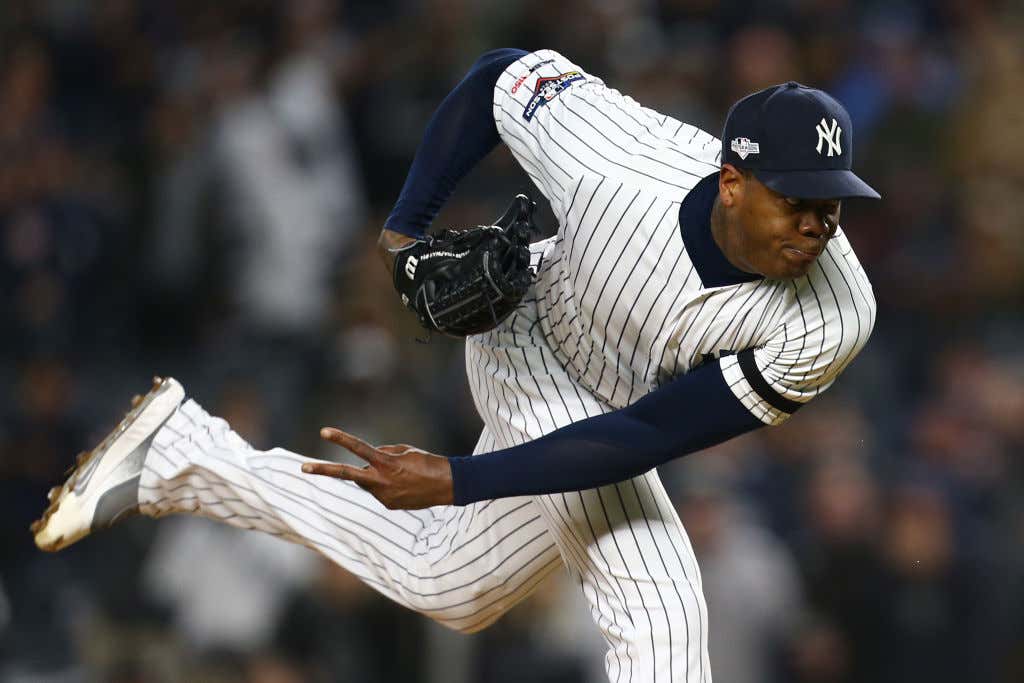 We're fast approaching opt-out day. The Yankees have already said good bye to Edwin Encarnacion and his $20 mill 2020 option. That was expected. Chapman's is more interesting. Ball is in his court. He's in the final stages of his 5 year $86 million deal he signed a few years ago. Sitting on the table is a 2 year $30 million opt in. So what will he do?

Everyone loves job security. Chapman will likely want that 3rd year with maybe an option for a 4th. I'd be pretty shocked if he opts in, but you never know. Back during the summer Rosenthal said there was a million percent chance he would opt out. Chapman has been fantastic as a Yankee and his numbers out of the closer position are better than pretty much everyone else's in that span. The bad news for Chapman is that the closer market has diminished drastically. Craig Kimbrel's 3 year $45 million deal he signed mid season will be looked at as a danger sign. In 20.2 innings last year he posted a 6.53 ERA. The question will be, will teams ignore Kimbrel since Chapman is still head and shoulders better and thus offer him a big deal, or will they shy away? Is Chapman good enough still to reset the closer market? Would a team like the Dodgers with a diminishing Jansen offer him 3 years $60 million, or more? Maybe the Padres pair Yates and Aroldis together to form their own dominant back end? Maybe the Mets go nuts and sure up the 9th inning that plagued them so much last year? There are always teams in need of a dominant closer, but at what lengths are they willing to go?

Here's what I would do. If Chapman opts in then that's fine for the years and dollar amount. I can live with two more years at that price. If he opts out, see ya later. I wouldn't go anything over two years for him. Sign Dellin Betances back for a 2 year deal on the cheap. With how much of a disaster 2019 was, you'd imagine he takes whatever you offer him and stays in the place he grew up, New York. I'm thinking 2 year $16 million gets it done. A bullpen of Green, Ottavino, Kahnle, Betances, and Britton certainly gets the job done.

Zack Britton showed last season that he's back to being his old self. 61.1 innings with a 1.91 ERA. In the postseason he was even better: 8 innings one run, two hits. Britton's issue is walks. That's why fans get on him. He also pitches to contact and with shifts these days, sometimes balls find holes in the later innings with him. Rarely, however, is he hit hard. He's a ground ball machine, which is all you want in Yankee Stadium, and is coming off a season with a 77.2% rate in that department. I'm a huge Britton guy and would sign up for him to be the closer in 2020 if Aroldis walks.

The plan to me is simple. If Aroldis opts out, let him walk. Let Didi walk as well. Consider Ellsbury's contract coming off the books in 2021. Use all of that money and give it to Gerrit Cole or Stephen Strasburg. There's your money. Go get your ace.