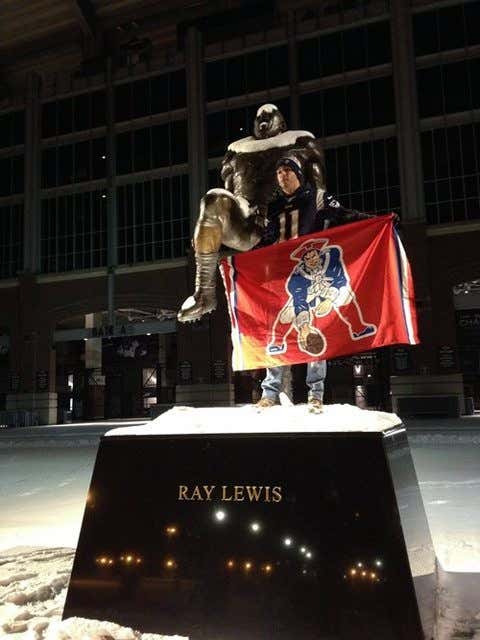 I’m going to start off talking about the Patriots at Ravens Sunday night with something I rarely do: Make a movie reference. In fact, I’m going to refer to a Martin Scorcese film, which could be a first for me.

There’s a great moment toward the end of the pre-credit battle scene in the criminally underappreciated “Gangs of New York” in which Daniel Day Lewis’ Bill the Butcher has just killed Liam Neeson’s Priest Vallon. And he tells his men to take the noses and ears of all the Irishmen they killed as trophies. But orders that “no hand shall touch” the Priest, so that he may “cross over whole.”

No. It’s about respect. It’s about appreciating a worthy adversary who fought nobly and tested you to your limits. Who won his share of battles and brought out your best and deserves to be honored for it.

Which brings me to the Ravens. Like I told the guys on Barstool Breakfast Monday, I think people tend to overlook the fact that the Patriots one true rival during this Dynasty era has been Baltimore. The AFC East teams are all non-starters, despite a win or two every season and 20 years of bad blood. You can say the Steelers, but looking at the track record, that’s like arguing an ant has a rivalry with a boot. The two games against Kansas City last year were all time classics. But aside from the “We’re onto Cincinnati” game in September of 2014, the Chiefs have never done damage. The Giants have two devastating losses in a trophy case until the end of time. But two games over two decades doesn’t constitute a rivalry.

The Ravens are the ones who’ve given the Bradichick Patriots their greatest challenge. They’ve handed the Pats some of their most devastating losses. In the 10 times the teams have met, the Pats have won seven times. But they’re 2-2 against each other in the postseason. And those 10 game were by a combined score of New England: 263, Baltimore: 238. Take away the one time in 2013 the Pats won 41-7 and it’s NE: 222, BAL: 231.

The Ravens have produced some of the toughest opponents the Patriots have faced. No one has ever owned more acreage in Tom Brady’s cerebral cortex than Ed Reed:

Plus they’ve gotten kicked in the postseason nads by Ray Rice, Anquan Boldin, Joe Flacco, Torrey Smith, Ray Lewis and the Pennywise in the Patriots Storm Drain, Bernard Pollard. Just to name a few. And in return, the Patriots have crushed the Ravens windpipe, preventing what might have been a dynasty for them. And there is no figure in the world who inspires more resentment from John Harbaugh than Belichick does. No matter how much he talked this week about his love and admiration. So with that, celebrating some of the great Ravens Patriots moments of the last dozen years.

This was actually the Ravens of Brian Billick. And of all the games in the 16-0 season, this one is the second most memorable, after only the all-timer Week 17 Saturday night game against the Giants. Down 24-20 at their own 28, with the perfect season hanging in the balance, Brady hit a young tight end named Ben Watson to get it to midfield. A completion to his Obama-era James White Kevin Faulk set up a 4th & 1. Which the Ravens defense promptly stopped. Ballgame. That is, until Rex Ryan stopped his defense from stopping the Pats offense with a time out just before the snap. (This morning,Kliff Kingsbury can relate.) The Pats converted on their do over and, in fact, the Ravens appeared to make another 4th down stop in the red zone, but a defensive hold put the defibrillator paddles to their heart and got it pumping again. Finally Brady hit Jabar Gaffney in the back corner of the end zone to for the win that made them 13-0 and kept the dream alive. The best part was that Don Shula, the Dirty Grandpa of Belichick resenters, was there in the owners box cheering for Baltimore.

Here’s a fact. Whether it’s a Fun Fact or not depends on your worldview. But this is still the only time the Pats have lost a Wild Card game in the dynasty era. In fact, they’ve only played in three and not a single one since. But this stands alone as the most one-sided postseason beatdown they’ve received in the championship era. This was a pegging, without the courtesy of a reach-around. This was the 2009 Pats team that had lost Tedy Bruschi and Rodney Harrison to retirement and Mike Vrabel and Richard Seymour to trades. It showed. On the very first play from scrimmage Jarvis Green, playing where Seymour used to be, fired into the backfield as Ray Rice ran right through the hole Green should’ve been plugging. He went 83 yards for the score and that was the last time it was ever a competitive game. I’ll always remember watching at home as the Ravens went up 24-0 and the Pats drives ended Fumble, Punt, Interception, Interception, Punt. On a kickoff, Darius Butler went to return it an promptly got hammered into the turf by an unblocked defender while I did the Alec Baldwin “Glengarry Glen Ross” (movie reference No. 2) “Get mad! Get MAD, you sons of bitches!” thing. The first play from scrimmage, Brady hit Watson between the “8” and the “4”. Drop. Game over. In the end, it was a mercy killing for the most underperforming Pats team of the 21st century.

The 2011 Patriots boast (not the right word but I’ll leave it) one of the thinnest defenses ever to make it to a Super Bowl. Witness the fact that clinging with their fingernails to a 3-point lead with the Ravens driving, they had Julian Edelman at safety and Lee Evans being covered by Sterling Moore. Still, Moore broke up Evans on what would’ve been a game-winning TD. (It wasn’t a drop, no matter how history remembers it.) Setting up Billy Cundiff for a 32-yarder that would send the game into overtime. Except when it came time to kick, Cundiff was 45 yards or so upfield warming up. He came racing up the field, which was unnecessary because Baltimore still had a timeout. And promptly Ray Finkled the kick, while all of New England stood there trying to figure out what happened, like Jules and Vincent checking themselves for bullet wounds when the kid comes out of the back bedroom firing his hand cannon. (Stop me before I reference again.) Afterwards, Harbaugh tried to blame the Patriots, claiming the confusion was over the fact the scoreboard indicated it was 3rd down. Ignoring the facts that

1) The NFL operates the scoreboard
2) There’s a man standing in front of him with a big orange “4” on top of a stick. And
3) He’s being required to count to four. It doesn’t take a vampire puppet to keep track of the downs.

Still this was the game that truly turned this rivalry into a fight in an alley with broken bottles and trash can lids.

This was the AFC championship game that ushered in the long, national nightmare that was the Harbaugh Bowl. The Ravens of the Ray Lewis Deer Antler Spray were in a position to capture the 1-seed in the playoffs before going 1-4 down the stretch. One national power ranking had them as the 10th best team out of the 12 that made the postseason. On the season they were 10th in the league in offense and 12th in defense and didn’t do anything especially well. I repeat, on the season. Once they got into the postseason they played flawless football. The Patriots kept waiting for Flacco to make a mistake that never came. Trailing 13-7 at the half, he threw three touchdown passes, two to Boldin, as Baltimore outscored New England 21-0 the rest of the way. If this game had a “Friends” episode name, it would be “The One Where They Get Called ‘Arrogant Fuckers’ by Terrell Suggs of All People.”

If you draw up a list of the worst losses of the Dynasty Patriots, this one has to make the Top 10, at least.

Sweet Super Bowl DVDs are made of these. Who am I to disagree? This, one of the great postseason games for the Patriots of any era, should be remembered as more than just the prequel to The Deflategate Saga. It’s one that stands up to repeated viewings because it had all the elements. Two very balanced teams at the top of their game. The Patriots having to come back from not one but two 14-point deficits. Only to fall behind again by a field goal in the 4th quarter, that Brady answered with a touchdown to Jojo Lafell with 5:13 to go. The Edelman double pass to Danny Amendola. And the Tackle Eligible formations that the Ravens had no idea how to handle. Even after the official – in what I’m assuming is the only time in NFL history and should have been the real scandal of the 2014 playoffs told the Ravens defense, “Don’t cover 34!” meaning Shane Vereen. Which they did. Leaving 68 (Michael Hoomanawanui uncovered up the seam. And Harbaugh went into meltdown, coming out onto the field to tack on a 15-yard Unsportsmanlike for a formation that had not only been used before, but the Patriots had cleared with the league in advance. Just an all around unforgettable game that is now remembered mostly for the Edelman pass and the fact that after the game, Brady triggered Harbaugh by saying “Tell them to learn the rulebook.” And a fake cheating scandal/witchhunt was born.

So yeah, this has all the makings of a great game Sunday. Two good teams playing well. With history. Controversy. Bad blood. And two franchises that would be way more successful if the other hadn’t been standing in their way for the last dozen plus years. Kick the damned ball off already.