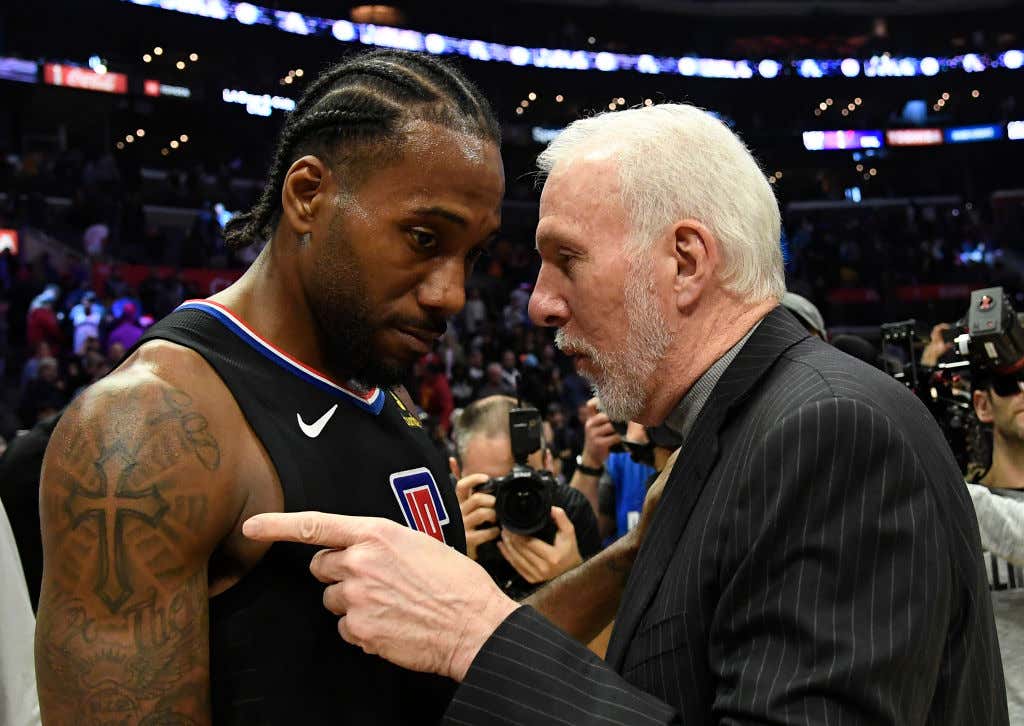 Good morning everybody happy Friday and welcome back to another edition of Last Night In The NBA where we bring you up to speed on everything that went down from the night before in the Association. A much lighter night on Thursday with just 3 games on the schedule but like every night so far this season it was well worth your time. We had breakout performances, upsets, you name it we had it. If you were maybe watching the football or something and missed the action, here’s what happened

I think it goes without saying that one team that absolutely nailed this past draft has to be the Miami Heat. Between Tyler Herro who has done nothing but get buckets at an efficient clip off the bench

to Kendrick Nunn who they signed as an undrafted free agent who just might be the leader in ROY right now because he is balling his face off. Did you know he’s scored the most points in NBA history through the first 5 games as an undrafted rookie? Now you do.

You can see why there is some hype that this team could end up in the 3-5 seed conversation. This isn’t just because they beat the Hawks either, these two have been doing shit like this in basically all 5 of their games so far. To get just 5 points on 2-10 shooting from Jimmy Butler and still win comfortably is pretty impressive.

This team is loaded with shooters, hell even Meyers Leonard made 3 3PM, and they play physical defense, a great example of that would be the fact that ATL didn’t score 30 in any quarter. They don’t turn the ball over and if they ever start getting something from Kelly Olynyk/Dragic off the bench it’s going to make them even more of a problem than they already are. Remember they did this with Justise Winslow sitting out with a back issue so to snag a road win like this is a great momentum builder.

For ATL, I mean without Trae Young you knew the offense was going to suffer, and I would say 40/20% with 16 TOs qualifies. It was not a great night for the starting group, pretty much everyone struggled from the floor whether it was Cam Reddish and his 2-11 or John Collins at 4-11 or De’Andre Hunter at 1-9. Rough stuff all around. The second unit though, much different story there

They actually showed some life and were the reason the Hawks were even in this game. A total of 60 points coming from their second unit, they’re going to need production like that while Young is out for the next few weeks with that ankle. There was a moment there where the Hawks cut it to 6 midway through the fourth, but some dagger Leonard threes and a Nunn basket killed that little rally and now the Hawks are below .500. Rough.

Well here’s something you probably didn’t really expect. One of the best teams in the conference to go on the road to a winless, Zion-less Pelicans team and get run out of the gym. Things were tight through the first 24 minutes, the Pelcans had just a 4 point lead and then something clicked because the floodgates opened to the tune of a 66 point second half

OK a couple things here. First, Brandon Ingram is making himself A LOT of money for this summer. One of the players from the 2016 draft class that did not get an early extension, he is playing his way to a massive offer sheet from someone in what is going to be a down free agent class. If you thought Jaylen Brown got a ton of money, Ingram is getting at LEAST 115M in my opinion and frankly if he keeps developing as this #1 scorer he probably earned it. He was efficient, he’s willingly shooting threes, he’s getting to the FT line, I’d say he’s turned into the exact player the Pelicans were hoping for.

Then there’s Jahlil Okafor. I think the majority of us were dead ass wrong about this guy. I just thought he’d never really get in shape but he’s another guy that has been an absolute steal for this team. He’s found new life in NO, and his game translates even if he’s not a three point shooter. When he went to BKN and looked terrible I thought that was it for him, but he’s proved us all wrong.

For DEN, I mean play defense for me one time Denver what the hell are you doing. You know you had a top 10 defense last year right? Allowing over 30 points in 3 of the 4 quarters is not going to cut it in the West because guess what, even the really bad teams are still loaded with talent. I will say it was cool to see MPJ make his debut and play well

and the rest of their bench played OK with three other guys in double figures, but an overall quiet night from JOkic and the starters (their backcourt went a combined 10-24) you need to be able to defend at a level a whole lot better than what we saw. The West is too stacked for a team like DEN to lose to a winless Pelicans team. Simple as that.

I bet the Spurs wished the Clipper gave Kawhi a rest day last night because wouldn’t you believe that when he played not only did the Clippers win, but he looked fantastic

Considering no other LAC starter finished in double figures I’d say so. Kawhi basically took 1/3rd of the team’s shots, he finished with 32 of the 91 and no other starter took more than 8. I don’t think that was an accident either, I think Kawhi wanted to stick it to his old team and that’s exactly what he did.

He got his help from the bench like he normally does, this time from Montrezl Harrell

but in the end it was just too much Kawhi for the Spurs to handle.

For SA, it was sort of the same thing as the Clippers where DeRozan did all of the scoring for the starters with 29, the only player to finish in double figures and his 21 shots were the most with no other starter taking more than 8

then, they also got help from one guy on the bench to score 20+ while nobody else did much and that was Derrick White

Kind of spooky on Halloween that these two teams basically had the exact same performances, and that’s why the score was so close. You don’t love LMA being held to only 5 points, and if you get anything from him the Spurs probably win this game but there is no shame to losing to a loaded Clippers team on the road. The Spurs are still 3-1 and are off to a much better start than their preseason indicated.

And that’s it! You’re now all caught up with everything that went down last night in the NBA. We’re back with 8 more games tonight so you know the drill if you plan on heading out to the bars tonight. Have a great Friday!