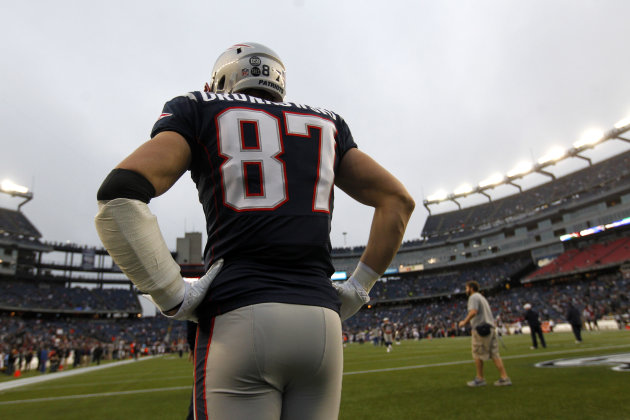 NFL.com – Rob Gronkowski is set to return to the operating table, but it doesn’t involve his troublesome forearm. NFL.com’s Albert Breer reported Wednesday that the New England Patriots tight end will need back surgery, according to a source briefed on his status. Surgery tentatively is set for mid-June and will be performed by Dr. Robert Watkins, according to Breer. It’s expected that Gronkowski will miss at least part of Patriots training camp. This doesn’t count as a surprising development. The possibility of back surgery previously was known, though the Patriots had held out hope it could be avoided. Gronkowski has dealt with back issues going back to his days at Arizona. He underwent a previous back surgery — also performed by Dr. Watkins — in September of 2009. The news is better concerning Gronkowski’s recently repaired left forearm, which is healing with no sign of the infection resurfacing.

This surgery represents Gronk’s fifth operation since last November.  And the whole situation comes down to one question: Are you concerned?  And the answer is “You’re goddamned right I’m concerned.”  You’d belong in a mental ward if you weren’t at least a little bit worried.  At his healthiest Gronk is absolutely unguardable.  And in the last two postseason losses when he was hurting (against the Giants) or out of the lineup (vs Baltimore) even your grandmother could see they struggled to keep drives alive without him at his best.  But there’s a huge difference between “concerned” and “panicky.”  Surgery is always chancy.  But in the words of Frank Drebin, you take a big chance getting up in the morning, crossing the street, or sticking your face in a fan.

The speculation is that Gronk could be ready to start the season, but in all likelihood might miss the first few games or, worst case scenario, start the year on the PUP list.  Is that really cause for panic in the streets?  Hardly.  The last I looked the Pats were still the AFC East.  With or without Gronk playing all 16, the division is still theirs for the taking.  We don’t need him in September; we need him in January.  Better to get the surgery done in June and get him ready for crunch time since a playoff spot is pretty much a fait accompli.  And besides, this proves that no one prepares for contingencies like the Patriots.  When they stole Jake Ballard from the Giants, there were some people actually questioning why they’d bother, since they didn’t “need” him.  Well how’s that move looking now?  Typical Belichick.  Planning for now and for the future.  And being ready for all possibilities.

So this could be a setback.  But in all likelihood it won’t stand in the way of Lombardi No. IV.  Can they win it with Ballard, Aaron Hernandez and Gronk missing a few weeks?  Why the hell not? This was, after all, a team that won Super Bowls with the likes of Jermaine Wiggins, Rod Rutledge, Daniel Graham and Christian Fauria.  So stranger things have happened.  The only thing we really know for sure is that for the rest of the summer, the ladies of America are going to have to get used to being plowed standing up.  @JerryThornton1