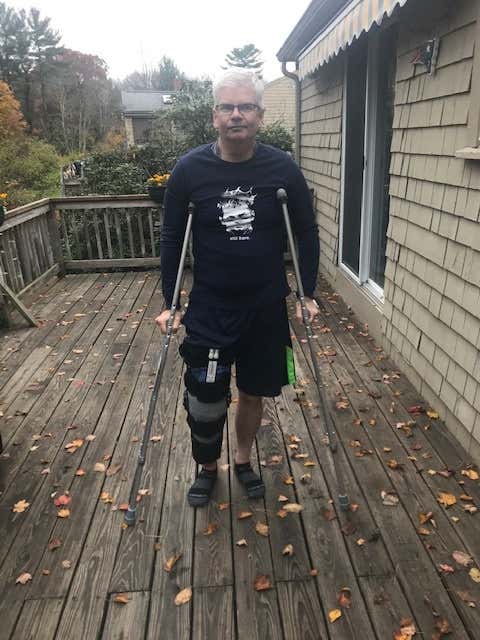 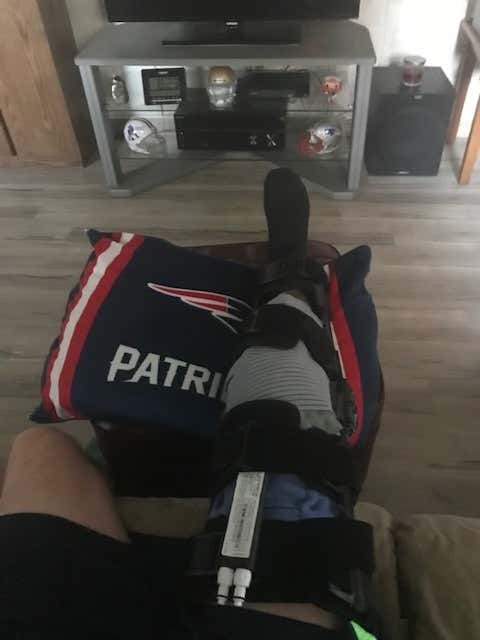 As everyone is no doubt aware by now, there are many things I share with Tom Brady. Boyish charm. Good looks. A superhuman aging process. Beautiful wives and genetically perfect children. The respect of our teammates and the resentment of those less accomplished. And, as of yesterday, surgery to repair a torn ACL. The only difference being mine was in my right knee and Bernard Pollard was not involved. But it’s almost certain that, like the GOAT of quarterbacks, the GOAT of Patriots writers will be back better, more agile and more pliable than before the surgery.

By way of full disclosure, I tore the ACL failing to navigate the steps of my back deck a year and a half ago and just decided to try and live with it. And I can. I can lift and do the elliptical and carry a 5 gallon bottle of water up from the basement. But the thing will give out walking through a store or stepping out of a golf cart. And enough is enough. Like I told the surgeon, it hit me that if I was out with a group of friends and we were stalked by a wolfpack, they’d spot me as the lame one and I’d end up getting attacked. So I just want to be able to run faster than my slowest friend. Nature is terrible and you can’t take chances. In his professional opinion, I made the right decision.

So with that, here are a few lessons I’ve learned from the first major surgery I’ve every had in my long and not particularly healthy life:

I get that every politician loves to play the “high cost of medical care” card. We do spend a lot on it. The costs are alarming. It is better to spend less on things than to spend more on things. That is, until it’s you getting worked on. Or a loved one. MRIs are really expensive machines that probably cost a ton every time they flip the ON switch and ask you what kind of music you want to listen to. Which doesn’t matter to you a damn when it’s your precious leg joint they’re mapping hyper-accurate 3-D images of. I can only imagine what it’s like when a family member is getting life saving procedures done. But I can guarantee when you’re in that situation, you won’t be looking at the price list like you’re ordering wine at dinner. No one ever said “Thanks, doctor. My daughter will have your second least expensive operation.” As far as the politician’s go, I’ll let them have complete control over our medical care when they guarantee me I’ll be sitting in the waiting room between both my senators.

This shouldn’t be news to anyone over the age of 12. But I’m living a first hand (knee) lesson in it. I’m an aging man who sits at a desk in his own house burping the alphabet into a QWERTY keyboard for a living. I need a healthy knee to do my job as much as Pope Francis need a fully functioning Papal Penis. They’re both nice to have and helpful when it comes time for bathroom breaks, but not necessary to get the job done. I just got a non-invasion procedure done. And instead of an icepack like a poor person, they gave me a little cooler you put ice in that blasts cold air into the wrap. And, incidentally, it’ll hold a 4-pack of IPAs. Yet I can’t stop thinking about a guy like Bobby Orr, who was born too soon for this. The greatest hockey player of all time, and his knee was cut open by a medieval barber using iron knives and leeches and sewed shut with cat gut. I’m not even sure they had come up with the germ theory before his 127 operations. I just know I met him at the Dropkick Murphy’s charity golf outing last year. And if he had had the same technology in his day, he’d be giving you quality shifts on the penalty kill right now.

I found out that when you’re what guys my age like to vaguely call “above a certain age,” they don’t take a ligament from your own body. Apparently mine are all too dry and brittle from too much use of the TV remote and too many IPAs. So they get one from a cadaver. Which is both creepy and fascinating. Creepy because I have a dead guy’s ligament in my knee. Fascinating when you realize that people have believed in the healing power of the dead throughout time. You know why there are so few Egyptian mummies left today? Because Europeans used to eat them, thinking it make them healthy. Romans used to drink the blood of gladiators, believing that dying a violent death gave them powers. In the middle ages people would run up to the gallows to rub the hands of the person who was hung on their skin believing it cured diseases. And an American reporter wrote of seeing Germans bring cups to a beheading to catch the blood of the executed, thinking that drinking it would cure epilepsy. That wasn’t ancient times; it was 1861. Now I’m getting treated with the healing power of someone who died young. It’s a weird feeling, but also profound in a way. I specifically asked them for someone who could dunk. But with my luck, I probably just got one from some other lazy ass blogger.

ACL Repair  Survivors Come Out Heathier Than They Were Before Surgery

This one I kind of knew, just because the Patriots have had a recent history of not shying away from guys – even college prospects – who’ve had the work done. I hate to use Dominique Easley as an example because he missed time and they didn’t keep him around to the end of his rookie deal. But it was not his surgicially-replaced ACL that let them down. But Brady obviously came through it with flying colors. When Wes Welker went down at the end of the 2009 season, I had him penciled in as the Comeback Player of the Year, 2011. But he was ready by training camp 2010. It’s essentially become the Tommy John surgery of knees. For now I’m walking like Anakin Skywalker coming off the table with his new Darth Vader robot legs. But I should be tearing up the treadmill, the golf course and the wedding dance floor better than ever, once I get rehab behind me. They – and that poor guy who gave his life so I could run again – have made me better than I was. Better. Stronger. Faster.

And so I’m back on the job without missing a day. Blogger. Comic. Published author. Surgery survivor. Bionically enhanced human. Hero??? That’s not for me to say. That’s for you to decide. But obviously, yes. I am a hero.