So anybody who has been following me for a little while knows I’m pretty familiar with Parking Wars. When I had my house, my neighbor used to park his car DIRECTLY in front of my home. Used to block my walk way and make me parallel park in front of my own house. Meanwhile, he had a house on top of a steep ass incline, and for some reason wouldnt pull his car up his driveway to the top of the hill. It was like he purposely inconvenienced himself and chose to walk up a mountain just to piss me off and park in front of my house. I never ended up confronting him, we just passive aggressively hated each other for a couple years. So I’m no stranger to getting petty with parking.

I’m in a new location this time, but apparently the Parking Pettiness follows me around. I moved from bougie Bronxville to the hood next door, Mount Vernon. Money Earnin Mount Vernon, to be precise. Decent enough neighborhood, but certainly not Bronxville. And on the block I live, they do street cleaning. Which means twice a week we all need to move our cars from one side of the street to the other. If you move your car the night before or early in the morning, you can usually get a spot right near your apartment/house, but if you’re late to move it, you’re out of luck and you gotta park down the street. I’ve never had to park more than like 7 or 8 houses away. Worst case scenario you are walking one suburban block. Thats it. So this morning I drop the kids off at school and come back, park my car and walk 4 minutes to the train station. Tonight I get back to my car and I see this fucking note, stuck to my side view mirror, with the mirror turned inward: 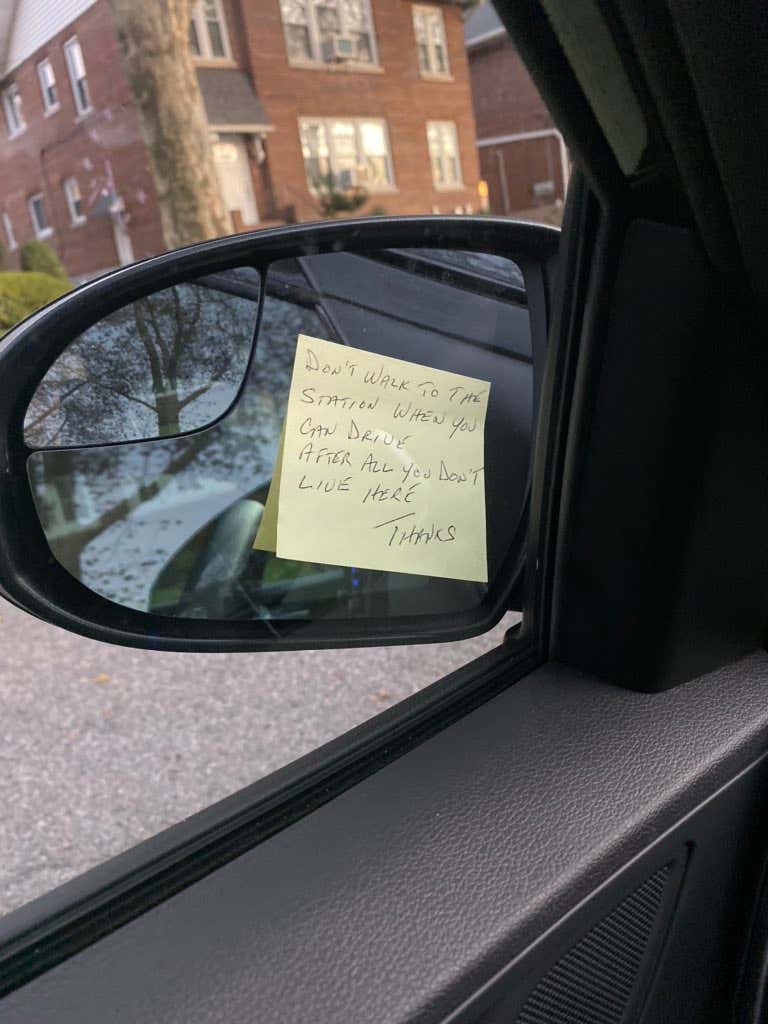 So this person either saw me park and get out to walk to the train and didnt recognize me, or they didnt recognize my car. Their argument was that I was driving from a different town, getting as close as I could to the train station, but parking on the side street for free to avoid paying for parking at the Metro North lot, thereby taking up some prime real estate for the people who live on our block. The obvious problem with their argument being that I do, in fact, live on the block. In fact I live just about directly across the street from them. But its not only that they’re just dead wrong, they’re a total fucking asshole. Leaving notes is such a lame, middle aged, “May I speak to your manager,” white-woman-named-Karen, move. And the “after all” is such a fucking condescending line. AND they had the nerve to touch my car and twist my mirror. I fucking HATE this person immediately. Like instant rage. Fury, even. At this point I am Dennis Reynolds. I’m untethered and my rage knows no bounds:

At this point I think there are two courses of action:

1) I burn down their house

2) I rig up their car to explode when they start the ignition, like the mafia does it.

Those are the only logical moves I see. But I dont technically know which house or car is theirs. I have a pretty good hunch its the one I’m in front of, but I cant be sure. So I dont want to get arrested for arson or murder and find out its the wrong guy. I am ITCHING to respond, but I dont know who wrote the note. WHO WROTE THE NOTE RAHNNN!

So I decide to respond via the same note they left me. See if I can at the very least piss them off, maybe make them feel like idiots, maybe smoke them out and have a showdown about it. I wrote on the same note “Yes I do” [live there] and I wrote my address & apartment, and signed off with “After All.” I went to stick it on the passenger side window so that they could see it from their house, if they were the house that wrote the note in the first place. As I walked up, a car pulled up in front of that house, and dude hops out of the passenger side. This big fat walrus lookin motherfucker. Like 65 yrs old. I had a feeling it was him, there was a tension in the air. So he walks to the car in the driveway of that house & says “You don’t need to respond to that, I wrote it myself.” I said “well apparently I do need to respond. I live here. Across the street.” He says “well I didn’t know that!” but in a real asshole manner. Like not acknowledging that it blows up his whole operation. More like doubling down that he doesn’t give a fuck. Had he just said “Sorry man. Didnt know you were from this block. Thought you were an outsider stealing up spots” I would have just dropped it. I still woulda thought he was an asshole for the note and the “After All,” but I would have just said all good, and moved on. But he didnt. He was a fat stubborn dickhead so I said “well then maybe you should stop writing stupid notes.”

At this point, its on. Fully on. Like Donkey Kong. Theres no turning back. There was a small window where we could have been civil to one another. There was an opportunity for peace. And I was torn. Half of me loves this shit but half of me wants no beef with anybody and would have loved to squash it and have no bad blood. I felt like President Whitmore talking to the aliens in Independence Day via the scientist when they wrapped their tentacles around his neck:

And so now we go. Now we feud until one of us cracks or dies.

Getting back to the story, I’ve just called him stupid, and I’ve eradicated him with logic explaining he’s wrong: I live here, and I moved my car for alternate side of the street parking. Hes got nothin, and he just yells “please move your car I’d like to park there.” I start laughing and say no. I mean get the fuck out of here. Why would I now move my car for you? What reason could you possibly give me that I’d acquiesce??

What happened next, I couldnt help but laugh. He responds, and yells about how he wants to park in front of his house. OH THE IRONY. In my head Im like, listen Walrus, I feel for you. I really do. I felt like St. Clair in the movie Taken. When he realizes Liam Neeson’s daughter is one of his pieces of merchandise and he’s like “I’m sorry. I really am. I’m a father too.” That was me. Except instead of talking about kidnapping daughters for the sex trade, I was talking about wanting to park in front of your house. I, too, once fought to be able to park in front of my own house. But that was in a different town. A fancy town. A nice town. At the end of a quiet block. Not a town in the hood with street cleaning and alternate side parking where the neighborhood has to fight for parking. So I understood his frustration, but he made it personal:

But I continue to fight on with logic. I explain with the alternate side parking, tomorrow HE’LL be parking in front of MY apartment on my side of the street. And I swear to God, I watched his brain short circuit in real time. He could not comprehend. This explanation befuddled the Walrus. He apparently has no understanding that the whole block just moves our cars back and forth, finding spots wherever we can, hopefully as close to your home as can be. He begins to yell more, and I say “Deal with it.” throw my hands up and start walking away. This move ENRAGED the blubbery beast. Arguably as enraged as I was when I first saw his stupid fucking note. We are having a Rage-Off. He says “DEAL WITH IT?!! We’ll see how you deal with it when you got 4 flats” as he drives away to find a new spot and I walk back home to my apartment.

PLEASE motherfucker. PLEASE slash my tires. Go ahead and vandalize my fucking Hyundai Tucson. It costs like 279 a month, pal. I’m Mr. Mom in that thing. You’re not slicing up my 1965 Shelby GT Mustang. Plus you just announced to me that you were the one who was gonna slash my tires. You dumb dickhead. So go ahead, pal. Make my day. I just got one question for you. Have you ever danced with the devil in the pale moonlight? You wanna get nuts??? LETS GET NUTS.

I got nothin to lose, I’m petty as fuck, and I’ve got nothin but time (and experience) to have a parking war. We ain’t in Bronxville anymore, Toto. We are in Money Earnin Mount Vernon and I LIVE FOR THIS SHIT. I will get a new fucking car and leave that one there if I have to. I’ll pay a hobo to sleep in that car 24/7. Until theres an apology issued, its Parking Wars 2.0 motherfucker.