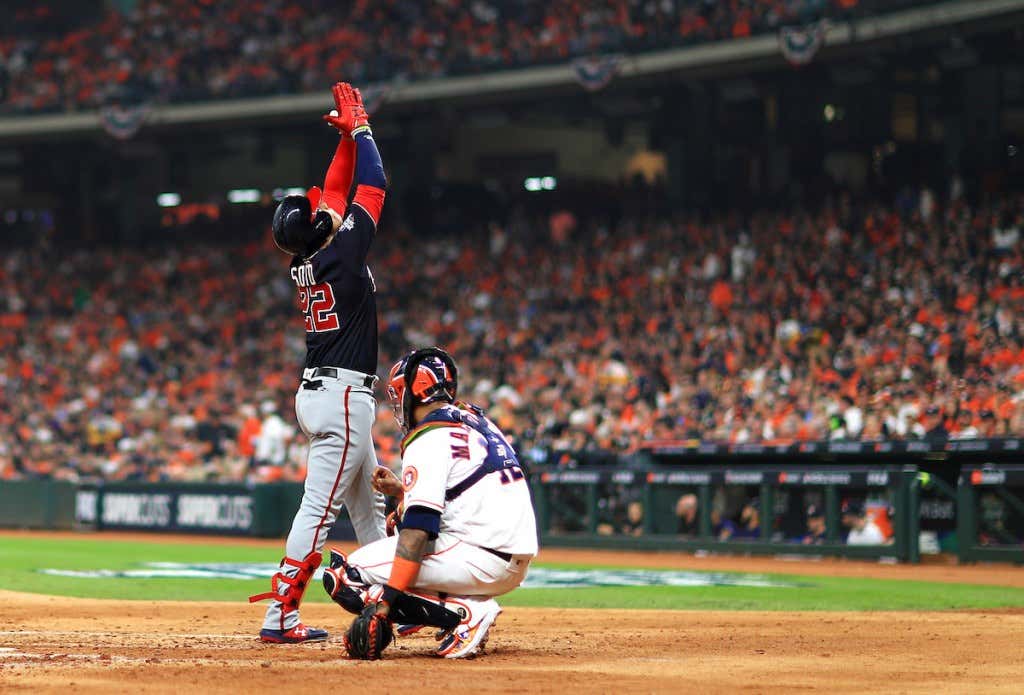 This was my reaction when I saw that the Washington Nationals were the biggest World Series underdogs since the 2007 Colorado Rockies.

Don’t get me wrong — I picked the Astros in six, but I wouldn’t be surprised if this series went seven. I also wouldn’t be surprised if the Nats won the whole damn thing. That 2007 Rockies team didn’t have a chance in hell at winning the World Series. Didn’t belong on the same field as the 2007 Red Sox. This Nats team? With that rotation? With Juan Soto, Anthony Rendon and friends? Come on. They deserve a little more respect than that, and they proved that in Game 1 of the World Series in Houston against the best pitcher on the planet right now, Gerrit Cole.

Speaking of Cole, he hadn’t lost a game since late May. He hadn’t allowed a run on a hit that wasn’t a homer since late August. He’s not human. Or, at least he didn’t appear to be until the Nationals hung a five-spot on him in the World Series opener. All of that changed on Tuesday night. He’s human, he can be beaten, and he was.

That was largely in part to the 20-year-old Soto coming within a triple of the cycle, hitting a monster home run on the train tracks and driving in three runs out of the cleanup spot. After an uncharacteristically quiet NLCS, Soto came alive against Cole.

While Cole might’ve outlasted Max Scherzer, going seven innings, the three-time Cy Young award winner gave the Nats five gutsy innings, bending often, but only breaking in the first inning when he gave up a pair of runs. That would be all the Astros could muster against the 35-year-old right-hander who punched out seven and walked three. Scherzer’s five innings represented his shortest start of the postseason since the Wild Card game, also five innings, but Mad Max battled for 112 pitches and gave the Nats everything he had. It was enough.

Down 5-2 going into the bottom of the seventh, this game looked like it was going to be smooth sailing for the Nats, but George Springer had other plans. The former UConn Huskie homered to get the Astros within two runs and then doubled in another run in the eighth to make this a one-run game. With juiced balls, Springer’s double is undoubtedly a homer. And if you want to nitpick, Springer’s double could’ve been a triple if he didn’t admire it out of the box.

Credit to Sean Doolittle who came into this game in the eighth inning and recorded some big outs against right-handed batters after Daniel Hudson had already recorded four outs of his own.

Should be a great series here, folks. And if Game 1 wasn’t enough evidence for you, the Nats are much better than the oddsmakers would lead you to believe. Then again, they’ve been defying the odds all postseason long. Let’s see if that continues in Game 2 when they send Stephen Strasburg to the mound against Justin Verlander.

Enter the Barstool Bets WS contests presented by FanDuel. Whether you’re a beginner or an expert sports bettor, our free-to-play betting contests give you the chance to win cold hard cash at zero cost.

Go to barstoolbets.com or download the app to enter the Game 2 contest by 8:07pm ET tonight.