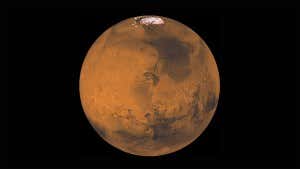 NASA is going back to Mars, Elon Musk has his heart set on Mars, that weirdo Bezos is probably sniffing around too. Mars is hot in the streets and yesterday it was officially announced that Manned-Missions to Mars were set to take place in 2035. It’ll be here before you know, but before NASA goes bouncing around the Red Planet they better ask for permission from three dudes in Yemen because…they own it. Or at least they claim they do.

In 1997 after the Mars Rover mission three guys in Yemen tried to sue NASA and the US Government for tresspassing on their land…on Mars.

Ismail, Kahlil, and al-Umari were of the opinion that they are direct descendants of the rightful owners of the Red Planet. Most importantly the three insisted their lineage was enough to claim ownership and file a complaint arguing that Mars is actually their home.

As a result, they asked the court to instruct the perpetrator to withhold all information obtained and stop with all operations immediately.

In short, their claim was built around the mythologies of two ancient and long-lost civilizations, the Himyarites and the Sabaeans, that existed several millennia before the age of Christ and the Roman Civilization.

According to these beliefs, the two ethnic groups raised a temple to each of the seven planets visible with the naked eye. Did the claimants interpret this as meaning that their ancestors were celestial beings? Who knows

Who knows? I know a guy who knows 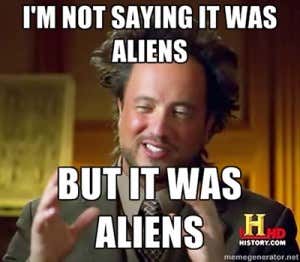 Probably the cockiest/craziest move of all time to tell NASA that they don’t have the right to any of the stuff they find on Mars from the mission that cost probably 20 billion dollars because your ancient dead ass grandpa built a temple and called dibs. Humans just laying claim to shit because we feel like it. A tale as old as time. I can’t wait until Aliens come here for real and they point up to the sky at their home star and some girl goes “Oh you’re from Lauren? My boyfriend Connor bought that star for me for our 6 month anniversary. Do you call it ‘Lauren’ too?”. And then the Alien just laser beams her in the face and melts her brain.

Anyways, the lawsuit by the Yemen guys was thrown out, as you can imagine, but they then tried to buy land on Mars for two dollars per square meter. Which you also can’t do because of the 1967 UN Space Treaty which says no country or man can claim to own land in outer space. Good effort by these crazy Yemenis though. The international rule of dibs works 99.9% of the time. Just not in space, I guess.