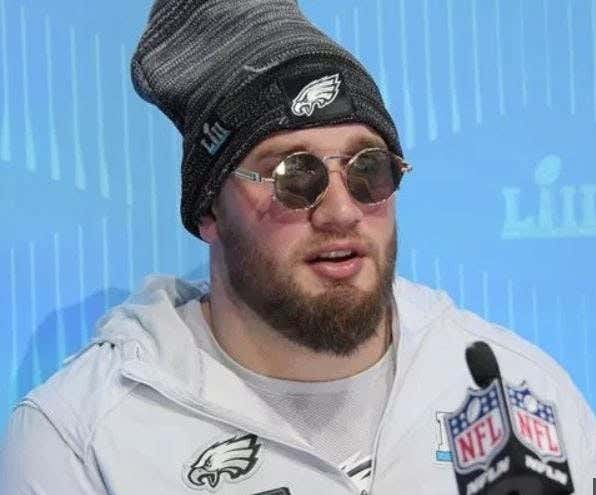 Funny, it doesn't seem like it, but it's just a year and a half ago that Lane Johnson went on PMT and told them the Eagles beat the Patriots in the Super Bowl because they have fun, which is not possible in New England. Or something.

“I just think that the ‘Patriot Way’ is a fear-based organization. Obviously, do they win? Hell yes, they win. They’ve won for a long time. Do I think people enjoy [it] and can say, ‘I had a lot of fun playing there?’ No, I don’t. That’s just the God’s honest truth.

“They’re successful, but when they go to interviews, they act like [expletive] robots. Hey, stop being a [expletive]. We can be cordial for a little bit. You only get to do this job one time, so let’s have fun while we’re doing it.

"Not to be reckless, but I’d much rather have fun and win a Super Bowl than be miserable and win five Super Bowls. But hey, it is what it is.”

And then called Tom Brady a dickhead:

And then came back on PMT after Tedy Bruschi said he's full of shit to basically say it again:

Oh, how times change. After getting pantsed by the Cowboys in a crucial game for the NFC East lead, filled with minimum wage effort for maximum pay on plays like this one from Nelson Agohlor:

… Johnson doesn't sound like being on the Eagles is all that much fun right now.

You hate to see it. Just hate, hate to see it. And I can understand Johnson's frustration, seeing as he committed a crucial Hands to the Face penalty in the red zone. But on the other hand, he's getting his wish, I guess. He's got his one Super Bowl. Which is worth more when you're enjoying yourself than five Super Bowls - make that six - when you're not. And beats this

So that's a tough night for the Eagles and for Johnson. According to Sunday Night Football, the odds of making the playoffs when you start 3-4 is like 17%, as opposed to 51% if they'd won and started 4-3. But one thing's for sure, there is going to be all the fun, excitement and hilarity anyone could ever hope for in that next team meeting. Not to be reckless.