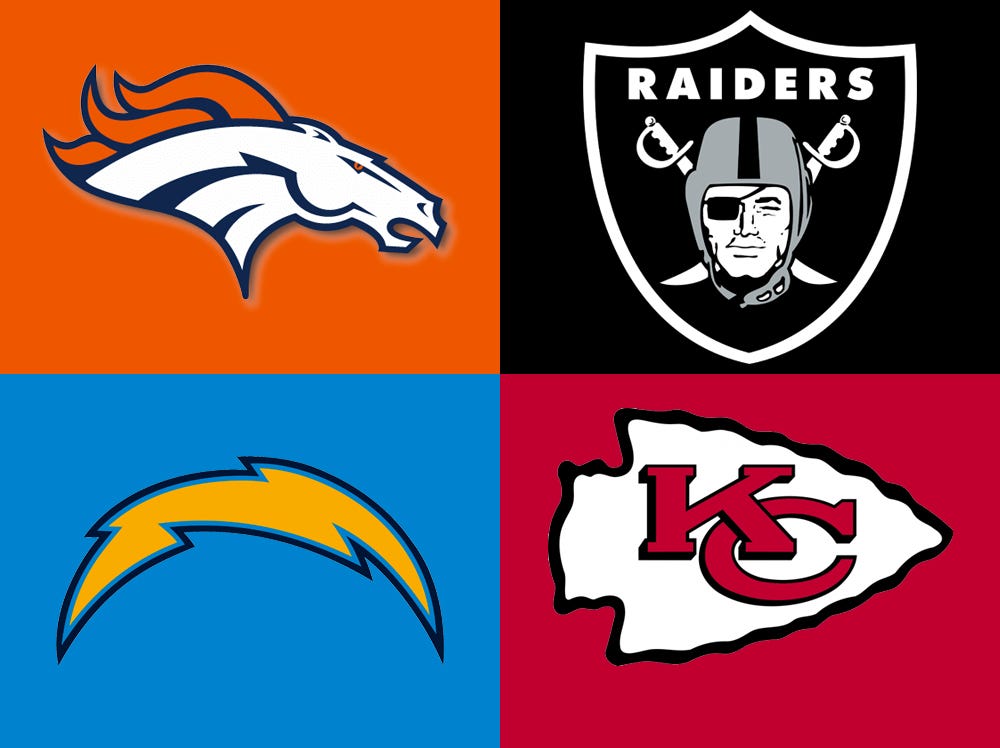 The Chiefs smacked Denver to the tune of 30-6 in Mile High, but lost their god-level QB for at least a few weeks in the process.
https://twitter.com/theMMQB/status/1185003832943747072
For KC, the game started about as great as they could have hoped on offense. They scored on their first 3 possessions which, along with a defensive TD, left them with a 14-point lead at the half. The problem was that Mahoomes got his knee twisted around like Chubby Checker right before the close of the half on a pile-up. The diagnosis as of now is a dislocated right kneecap with a return timetable of 3-5 weeks. As of the latest Schefter report, they're looking to have him back in 3 weeks, if not sooner. Props to Mr. Trill Whiskers himself, who said on Mickstape last week that the Chiefs should have just benched Mahomes this week with his ankle injury because this game was essentially meaningless. The Chiefs Bye isn't til week 12 and Denver isn't going to be a threat for the AFC west title AND Matt Moore could have probably lead this team to a win if he started. Now, is there any situation where I see the team doing that, but nevertheless. Moore played ok in Mahomes absence, finishing 10/19 with 117 yards and 57-yard bomb to Tyreek Hill. McCoy also looked good, averaging 5.3 YPC on 12 carries.
https://twitter.com/Chiefs/status/1185019894930259979
For the Broncos, I've been arguing this season that Flacco is not the reason that Denver is losing games. I still think that is true, but he did not look great vs a struggling Chiefs defensive unit. Flacco didn't score a single TD, and was sacked an insane 8 times. Flacco's struggles were compounded by Lindsay and Freeman not being able to get much going on the ground, which resulted in an unideal 7 punt game. I don't know what the answer for this offense, especially with Emmanuel Sanders reportedly being shopped, but maybe just work on getting Lindsay and Freeman involved more in the passing game. Draw more of the secondary in and free up the WRs? Maybe teach Fant to catch (5 targets 1 catch)?
https://twitter.com/Chiefs/status/1185015095648276481
Defensively for the Chiefs, this was probably their best performance of the year. 9 sacks, 10 hits, 3 passes defended, 11 Tackles for a loss. Anthony Hitchens, Frank Clark, and Alex Okafor each had 2 takedowns vs Denver's god awful line which was promising to see. With Mahomes out for a bit, their defense is going to have to step up big time. The ability to bottle up this anemic offense isn't really a great litmus test for the season, but the fact that they were able to dominate a team that they were SUPPOSED to dominate is great.
https://twitter.com/Chiefs/status/1185003419066601472
Defensively for the Broncos, not great Bob! They played better vs Matt Moore, but Mahomes was on pace for at least 2 or 3 more scores with the way he had them on their heels. They only managed a sack but also had a healthy 5 passes defended. Demarcus Walker had another strong outing which is good to see at least. What is bad to see, however, is Chris Harris getting roasted by Tyreek. Harris is a longstanding staple of the team, but I think it's time for him to go. Better to trade him now in a spent year and get some value then to let him toil for a few more years on a team that doesn't have a superbowl chance.
Notes: For KC, the Mahomes injury sucks. They face the Packers and Vikings in Arrowhead the next two weeks without him which will be a serious test of the team's resolve. The best way to beat these teams, in my opinion, is going to be to dominate POS. Do slow, methodical drives and don't plan on letting Moore throw more than 25ish passes. They host denver on sunday.
Notes for Denver: The offensive line is so painfully bad, it might be worth just letting Drew Lock get more reps. No need to cripple Flacco for life and they may be able to get some better analysis on Lock and if he is worth eventually starting. Defensively, though, things seem to be coming together. They travel to indy on Sunday.
Oakland actually played a solid offensive game but ended up getting godsmacked by the Packers to the tune of 42-24. 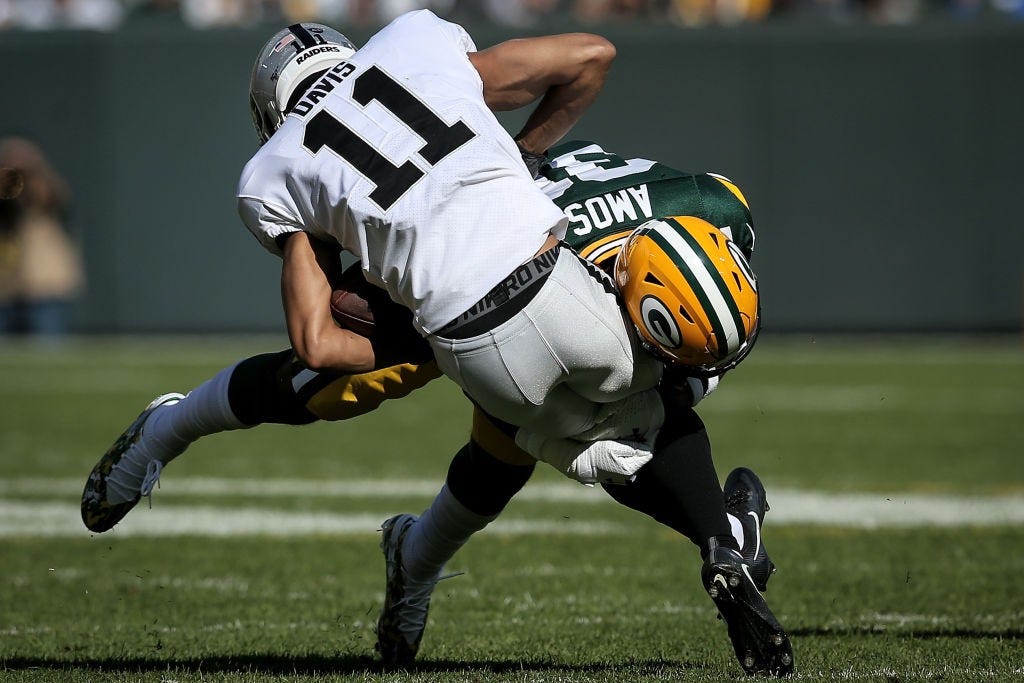 Carr played an above average game, going 22/28 and nearly capping 300 yards and 2 touchdowns. His big fuck ups came with a fumble out of bounds which showed a massive lack of spatial awareness, and a terrible pick in the red zone. You can't play like that inside the 20. Like, it's the ONE thing you really can't do. Darren Waller had yet another crazy game, earning his new extension and then some. He caught 7/8 targets for 126 and 2 touchdowns (and one called back where he dunked the ball on a packers fan). Josh Jacobs also had another great game totalling 124 yards and 5.9 YPC. As it stands, he's a game back and 8th in the league in rushing and 5th in the league in R/YPG.
https://twitter.com/Raiders/status/1185999958840893442
Defensively, they sucked. There's no two ways around that. Aaron Rodgers has been on a streak the past few weeks where he has been balling out, but that is no excuse for giving up 42 points to an offense with no wide receivers. Only Mad Maxx managed a sack, and they didn't break up a single pass all game long. Rodgers amassed a perfect passer rating and 5 TDs while abusing the entire secondary, mostly Gareon Conley. He ended up getting traded to Houston today and I can imagine his performance in this game had something to do with it.
Notes: This game really sucked, but they're still second in the AFC West and weirdly in contention for a wildcard. If they can shore up the secondary, anything is really possible. Josh Jacobs is good, man! They go to Houston on sunday to face Conley in a game I don't think they have much of a shot at winning.
The Chargers are the most embarrassing team in football. 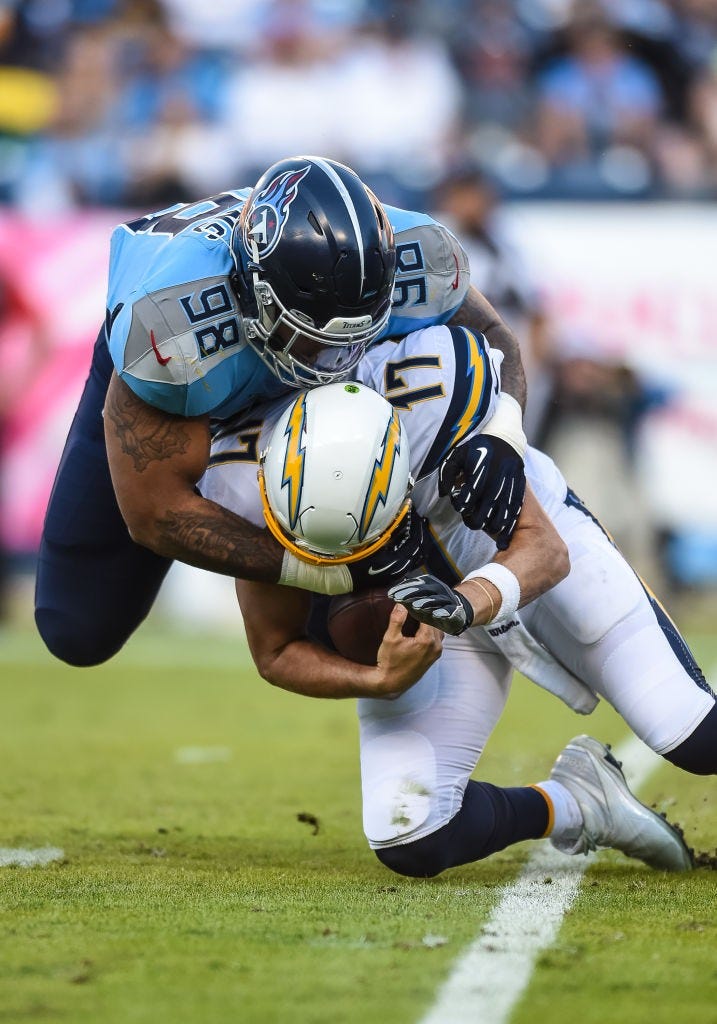 I'm not going to break this down bit by bit, I'm only going to say this. The Chargers are a disaster and I'm at peace with that. This is 2013 all over again where the offensive weapons are there and the defense has the potential to be good, but injuries, a high-school level offensive line, and poor coaching has crippled any ability to succeed. Rivers, Gordon and Ekeler haven't been afforded the ability to succeed because there is literally nowhere to go. The RBs have no holes to run through and Rivers can't hold on to the ball for more than 3 seconds. Instead of compensating for this fact, Lynn hasn't really changed the play calling to fit the personel. The one thing I'll dispute is this narrative that they would have run if Rivers just QB sneaked on the last play of the game, and the evidence used to support that argument is the fact that Rivers never QB sneaks. Huh? He doesn't QB sneak. He's 37 years old, he's likely the most unathletic player in the sport and he doesn't have a competent offensive line. There is NO SITUATION where he it's more likely he gets that score over 6'1 220lbs Melvin Gordon. Rivers cant reach over the top because he can't jump. He can't go underneath because he is not strong and his line sucks. With Gordon, at least there was a chance he could break the initial contact. Unfortunately, Woodyard got a free run at him 2 yards behind the LOS and that was that.
Notes: It's tank time. I don't see any scenario where they get a top pick this year, but 10? 11? Sure thing! The rest of their schedule is a mixed bag, where they should lose half the games even if trying 100% anyway. add a couple more losses on that and a 4-12 team and maybe space for a competent offensive lineman. They go to the bears on sunday.