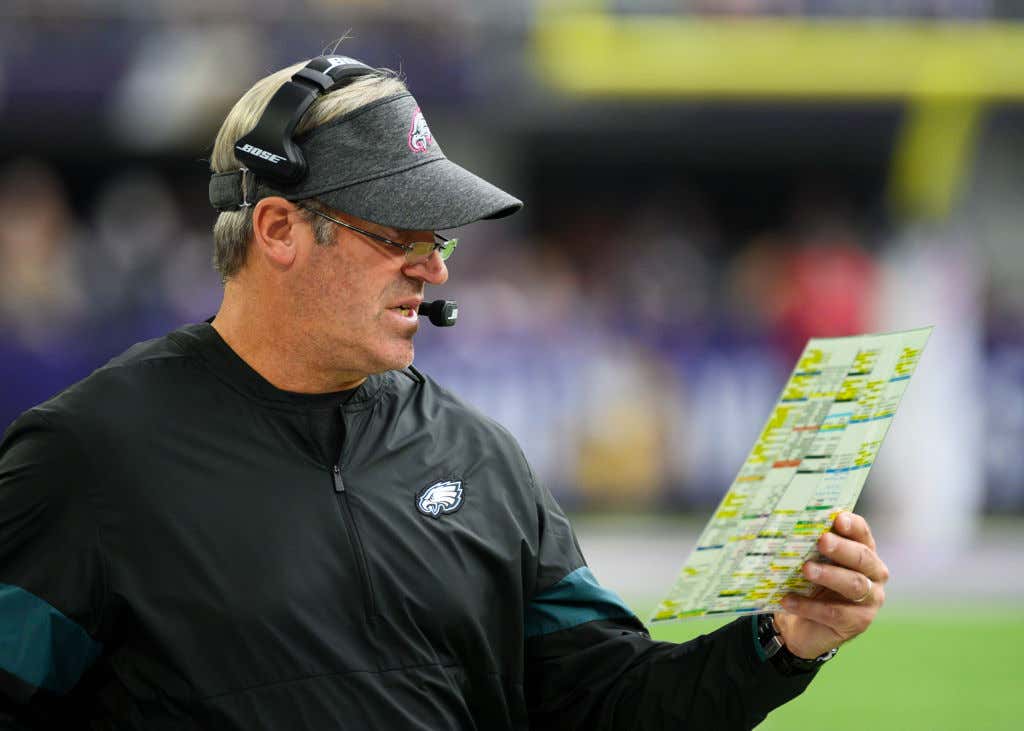 The writing has been on the wall for 9 months now and I can’t believe that it’s taken us this long to finally realize it. This Philadelphia Eagles team is fundamentally flawed and they are rotting from the inside out. I hate to use this word because it brings up horrible memories of Chip Kelly, but there is a massive culture problem that is killing this team right now. And it starts at the top.

9 months ago there was a report that came out that labeled Carson Wentz as “selfish” and “egotistical”. As soon as that report came out, regardless of how much of a hack the reporter came off as being a guy just trying to stir the pot for some clicks, you had to know that there was at least a crack in the locker room. Maybe not a total divide, but at least a little crack. Now the thing about cracks is that they get worse over time if you don’t fix them. You need to remove a rotting piece and seal the crack. If you just let that crack sit there and say to yourself, “ehh I’m sure it’ll be fine. It’s just a small little crack. I’ll fix it later”, well eventually that crack is going to grow and the whole fucking thing is going to come crumbling down.

That crack got a little bigger earlier this week when an anonymous source went to Josina Anderson to bitch about Carson throwing the ball downfield too much instead of just hitting the checkdown, as well as to bitch about Howie Roseman not trading for Jalen Ramsey. So we had anonymous sources bitching in January, and we had anonymous sources bitching in October DURING THE GODDAMN WEEK WHEN THE EAGLES WERE PLAYING THE DALLAS COWBOYS FOR 1ST PLACE IN THE NFC EAST. And you know what? Fuck the source, obviously, but what in the hell is Doug Pederson doing here? What in the hell are the leaders of this football team doing here? You dealt with this shit 9 months ago and you weren’t able to squash it then? You just let the crack continue to get bigger without doing anything to prevent it? 9 months. 9 fucking months there has been a culture crisis with this team and the guys who are in charge of fixing it haven’t done shit. And when there’s no leadership from the top down, guess what starts to happen?

How was this even acceptable in the first place? Guys just start showing up late to practices and meetings because they just don’t give a fuck anymore and there’s no real consequences (and again, during the goddamn week when the Eagles were playing the Dallas Cowboys for 1st place in the NFC East). And that “I don’t give a fuck” attitude is so obviously present in the Eagles on-field production. I mean just look at all of the horrifically idiotic penalties this team takes. This team doesn’t give a shit about the details. They’re never prepared. Absolute shit play calling. They’re always taking unnecessary penalties at the worst times. This team has every single system of a fatally flawed locker room, but somehow we didn’t realize it until it was too late. We didn’t realize it until this team legitimately quit on themselves and you get effort like this.

Nelson Agholor should feel ashamed of himself this morning but he won’t because he simply just doesn’t give a fuck. There are so many guys on this team who I would consider to be “me” guys. Agholor is at the top of the list. There are at least like 7 or 8 of them I could rattle off at the top of my head (looking at you, Miles Sanders). This isn’t a team. This is just a bunch of guys who are wearing the same uniform as each other. And again, as much as I would love to see Nelson Agholor get shipped out of Philly this morning, it starts at the top. Because Doug Pederson and the leaders of this team are the ones who are in charge of setting the culture for this team, and they have failed miserably.

Now I’m one of the biggest Carson Wentz apologizers out there. I would rather take a sledgehammer to the dick than ever say anything bad about Carson. But I’m willing to admit that he’s not the best leader for this specific Eagles team. With that being said, I don’t think that’s as much of a Carson Wentz problem as it is a rest of the team problem. I know that Carson Wentz has what it takes to be a great leader in this league. He’s always going to give you the effort, he cares about his guys and he obviously has all the talent he needs to lift the play of everybody else around him. But for this specific team? It’s just not a perfect fit for some reason. Which is why you just need to put a new team around him. Not a complete and total rebuild but there is some serious reconstruction that needs to happen here. The team is rotting and all we can do now is just pray that it doesn’t keep spreading. Godammit what a miserable Monday morning.