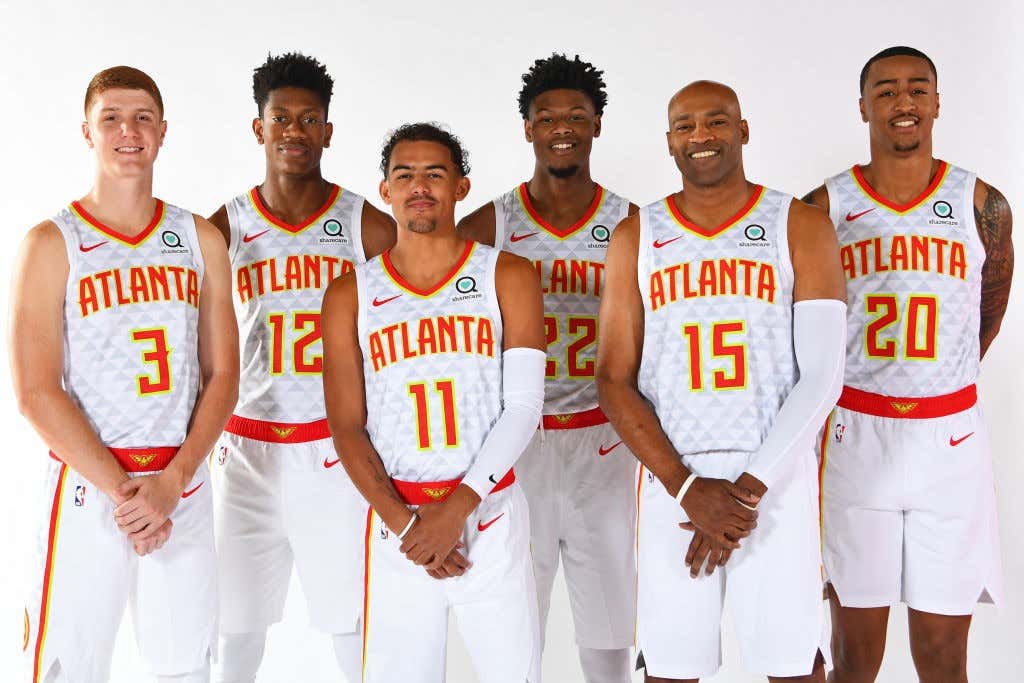 For good reason, many people are very high on the Atlanta Hawks heading into this upcoming season. Not like, “they’re Eastern Conference Finals contenders” high but more along the lines of they are going to be insanely fun to watch, they are loaded with really good young talent who all seem to have high ceilings, and they could very well compete for a lower playoff spot in a weak Eastern Conference. To some, that may not seem like a big deal but you have to remember who we’re talking about here. This is Year 3 of the Hawks rebuild, they’re coming off a 29 win season with the 12th youngest roster in the league with their franchise cornerstone players all still on their rookie deals. After a decade straight of making the playoffs from 2007-2016 this is poised to be the best season of this young rebuild that could very well get them back to the postseason. This is a must watch League Pass team right from the jump, and if you aren’t sure why you may as well get up to speed based off what we saw last season.

You want to know who has the least expensive roster in the league? You’re looking at it. That’s the benefit of having a team mostly made up of guys on their rookie deals (7), and at a total of $106,152,598 this is a team well positioned for not only in season trades if they so choose, but also as we enter next summer. With an intriguing core and money to spend, it’s an exciting time to be a Hawks fan 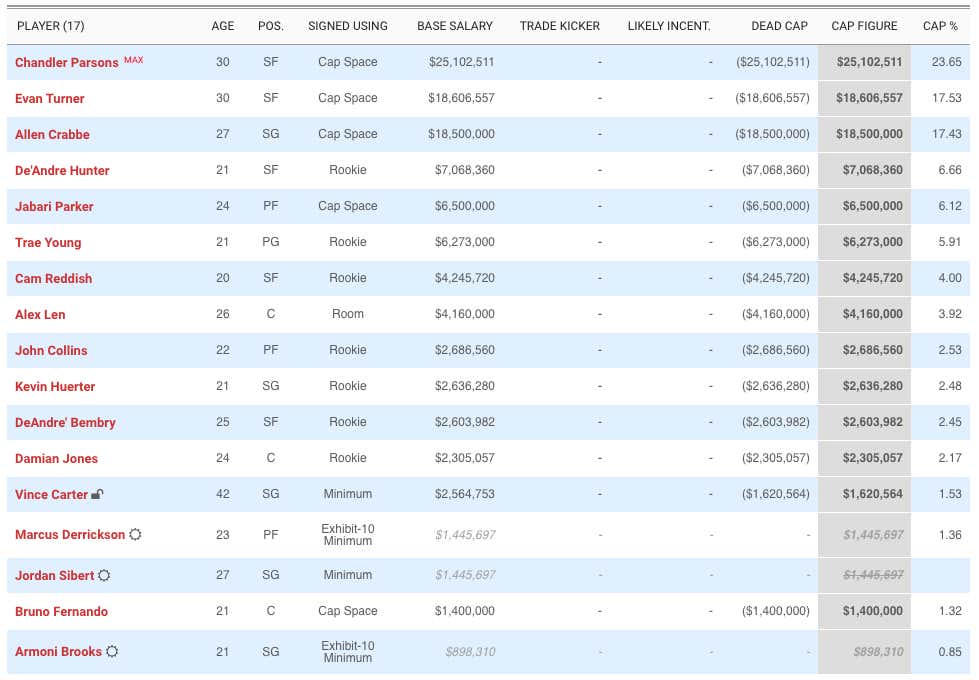 I know what you’re thinking. Yes, Chandler Parsons is still in the NBA. Did you know he played in 25 games last year? It was news to me when I saw it. You may have missed earlier this summer when he got traded to this team for Solomon Hill and Miles Plumlee and I can’t imagine they expect much from him this season. The good news is he’s a $25M expiring contract so it’s not like he’s going to hamper anything long term, and if they get anything from him it’s just a bonus. Same thing with Evan Turner and Allen Crabbe, another couple $18M expiring deals, but the difference there is these guys can actually play and will help this team. All in all, it’s a good sign financially when the three biggest contracts on your cap sheet are expiring, and if the Hawks ball out this year suddenly they become an attractive destination.

But the success of the Hawks isn’t really about Chandler Parsons or Allen Crabbe. It’s going to come down to the kids. Let’s start with the ones that are coming back for their second and third seasons: Trae Young, John Collins, Kevin Huerter. By all accounts, three studs all for their own unique reasons

Huerter became a full time starter on 11/15 and it made all the difference in the world. Playing with the first unit he averaged a respectable 10.8/3.3/3.2 on 42/38% splits with 119 3PM. The defense was a disaster, but he was a rookie so that should be forgiven. The Hawks were 3rd in the NBA in 3PM and it wasn’t all just Trae Young. Getting legit minutes from Huerter played a roll, especially using him as a spot up shooter where he ranked in the 72nd percentile (24% usage, 1.07 ppp). Considering the Hawks basically never run guys off screens seeing as how they ranked 30th in off screen sets, they are much more a drive and kick offense to shooters.

Then you have Trae and John Collins, who may run one of the most lethal P&R’s in the entire league. Collins ranked in the 79th percentile as a rolling big, and you combine his skillset to go up and get lobs with Trae’s elite floater game and it’s sort of a catch 22 for defenses. Who do you commit to? They look for the roll man the 8th most in terms of all the teams in the league, but they need to get better when it comes to ball handler scoring. Young struggles in this area as a scorer and as a team they ranked 29th in ball hander scoring. If you want to run P&R as much as the Hawks do, you need to make sure the ball handler is a threat. Neither Evan Turner or Allen Crabbe are all that good in scoring out of P&R, so it’ll be up to Trae to step this part of his game up.

If there’s one thing the Hawks addressed in this year’s draft, it’s more wings who can shoot and defend. Cam Reddish and De’Andre Hunter are already among the team leaders in 3PM a night this preseason. Based on what we’ve seen so far, all three look like they are going to be impact rookies right away. In today’s NBA you can never seem to have enough athletic wing talent who may be able to guard multiple positions, and given how this front office has drafted lately I’d say there’s a pretty good chance these guys are as legit as Hawks fans hope they are. De’Andre Hunter already looks like a stud

and while you could argue the whole Trae/Luka trade, the Hawks have done pretty well when evaluating high end lottery talent it seems.

Aside from the young guys, aside from the hype and the awesome highlights that are sure to come, if you need another reason to watch the Hawks this season that reason should be Vince Carter. Back for his 22nd season at age 150, the man still has basketball left in the tank which he showed us last year

I was very happy when they brought him back and he’s perfect for this team and this locker room especially with all these wings on the roster. He says it’s his last year so the retirement tour is officially on, and he absolutely deserves it.

Now all these new offensive weapons are nice, but if the Hawks don’t make legit strides on the defensive end, they’re going to be headed for their third straight lottery. This was the 28th ranked defense last season, and honestly this isn’t a case where they need to get into the top 10 or anything to be a fringe playoff team. Just be league average! Basically just do what Dallas did last year or something, maybe the Nets. Nothing crazy, still kinda shitty but at the very least it’s respectable. Their center spot is still pretty questionable so post defense may be an issue again, but they really need to improve across the board, the perimeter included. Team will pick on Trae because he’s small, but hopefully these new wings can help address a team that actually saw opponents shoot better when they were being defended. That obviously defeats the entire purpose of defense.

In the end the Hawks will be entertaining, they should be a bitch to play because of the talent they have, and if they can tighten up on the defensive end they can absolutely get back to the postseason. If that’s not enough to get you excited about a young up and coming team I dunno what to tell ya.