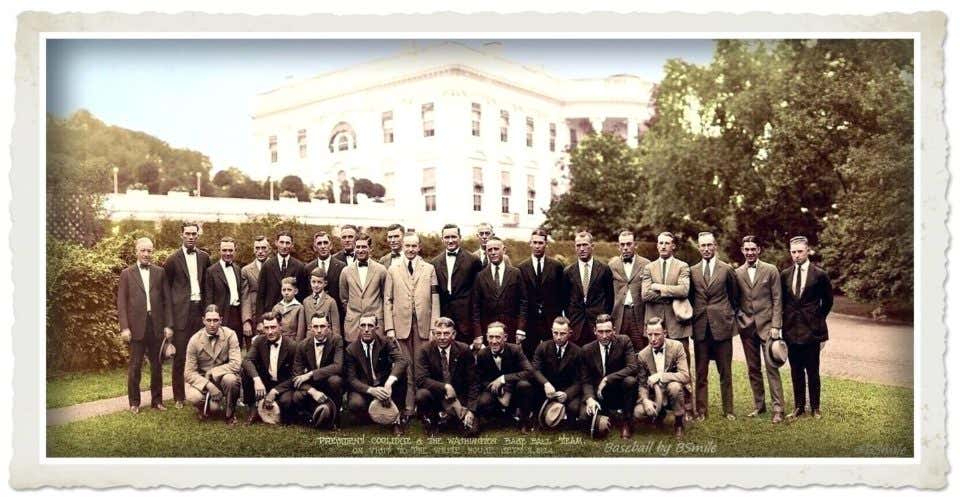 The Washington Senators win the World Series for the first and only time, as they beat the New York Giants 4-3 in the longest postseason seventh game ever played. The Senators take advantage of two errors in the 12th inning as Earl McNeely doubles home Muddy Ruel with the winning run. To celebrate, the Senators are invited to the White House by President Calvin Coolidge, beginning a new sports tradition.

The Washington Senators spent much of their existence in last place or near last place, as the famous slogan was Washington, First in War, First in Peace, and Last in the American League. A team that officially did not have a nickname as Senators was just what the fans called them since they were officially the Washington National Baseball Club. One player who shined in Washington was Walter Johnson, who year after year was one of baseball’s most dominant hurlers despite playing on a terrible team.

Heading into the 1924 season, the Senators had just six winning seasons in 23 years, with the last one coming in 1918. The Senators in 1924, though, had some kind of magic working on their side, as they were led by player-manager Bucky Harris, dubbed the “Boy Wonder” because, at the age of 28, he was the youngest manager ever to lead his team to the World Series. That season the Senators beat out the vaunted New York Yankees by two games with a record of 92-62. It was a season in which Walter Johnson won a precursor of the MVP, as he had the Pitcher’s Triple Crown for the third time, posting a record of 23-7 with a 2.72 ERA and 158 strikeouts.

Walter Johnson had seen it all with the Washington Senators, the good which was rare the bad and the ugly as he had been their top starting pitcher 1907. At 36, he was nearing the end of his career and knew he would not get many more shots to win a World Series. The Senators opponents in the Fall Classic were the New York Giants, who were quite familiar with October Baseball having won the National League Pennant for the fourth straight season under John McGraw with a record of 93-60.

Game 1 of the World Series at Griffith Stadium would be a preview of what was to come as the game went 12 innings, with both starters Art Nehrf of the Giants and Walter Johnson of the Senators gritting it out the entire game. The Senators had tied the game in the ninth inning with a double by Roger Peckinpaugh. The Giants would twice in the 12th with High Pockets Kelly providing the critical hit, while Senators answered one run in the bottom of the inning but fell just short of extending the game in a 4-3 loss.

Tom Zachry got the start for Washington in Game 2 as Jake Bentley started for the Giants. Goose Goslin gave the Senators the early lead, with a two-run home run in the first. The Senators would hold a 3-1 lead into the ninth inning when Giants behind High Pockets Kelly fought back to tie the game. The Senators, though, did not panic as Roger Peckinpaugh delivered a double in the bottom of the ninth to win the game 4-3.

At the Polo Grounds in Game 3, it was the Senators fighting back as they had the tying runs on base in the ninth inning. However, Mule Watson retired Ralph Miller and Muddy Ruel with the bases loaded to preserve as 6-4 win for New York, coming on in relief. Game 4 would be the Goose Goslin show, as the Senators young star went 4-for-4 with four RBI as Washington evened up the series at two games apiece with a 7-4 win. The Giants would bounce back in Game 5, handing a second series loss to Walter Johnson 6-2.

Game 6, as the series returned to Washington as a classic pitchers’ duel between Tom Zachry and Art Nehrf. The Giants had an early lead thanks to a first-inning RBI by High Pockets Kelly, while the Senators got two runs off the bat of Bucky Harris in the fifth to win the game 2-1.

The series would go to a decisive seventh game for the first time since 1912 and just the third time in its history. Virgil Barnes started for the Giants, while Curly Ogden was the opener for the Senators facing just the game’s first two batters before George Mogridge entered. Bucky Harris homered in the fourth to give the Senators a 1-0 lead. However, the Giants scored three times in the sixth to take the lead. With time running out, the Senators sent Walter Johnson into the game in the eighth, as Washington battled back to tie the game on a two-run two-out single by Harris that went past shortstop Freddie Lindstrom on a bad hop. The game remained tied until the 12th inning with Johnson dominating in his four innings of work, while Jack Bentley escaped trouble for the Giants. In the 12th, after getting a reprieve from a dropped foul ball by catcher Hank Gowdy, Muddy Ruel hit a double to begin what would be the game-winning rally. Walter Johnson followed and reached base on an error, setting the stage for the Walk off win, as Earl McNeely hit a game-winning double to give Washington its only baseball championship.