Edit: After finishing this, I realized that Kenjac already blogged about the topic at hand. Sorry. I have a slightly different take though.

Most of us have distinct memories of times when our lives were permanently changed by comedy. The first time watching a Dave Chapelle skit. The first time hearing Sheldon Cooper bellow "Bazinga!" The first time seeing a Logan Paul vine. The first reading a nonfictional Tucker Max story. The first time "pantsing" a prepubescent 7th grade boy at recess and exposing his hairless, infantile dick and balls to a clique of judgmental 8th grade cheerleaders. Whatever it may be, we can all recall certain moments from our past when the art of comedy tickled our sense of humor in a manner that can only be described as "life-changing."

So what the heck happened? Why do those moments of unforgettable hilarity seem to only be nostalgic pieces of our past. Well, it's actually because comedy fucking sucks now. There's a reason the genre is failing and Hollywood lackadaisically casts Kevin Hart to play a chaotic man-child whenever they need to hit a quota for comedy movies. Why do you think SNL resorts to doing bits like poorly parodying a video of a 22-year-old chronic vape addict that was already a parody itself. Do you honestly think it's because they're incapable of coming up with anything funnier on their own? Well, yes, but it's also because traditional comedy has become so boring and outdated that people don't find humor in things that are funny anymore. We're sick and tired of laughing at comedy just because it's "funny." That's stale. 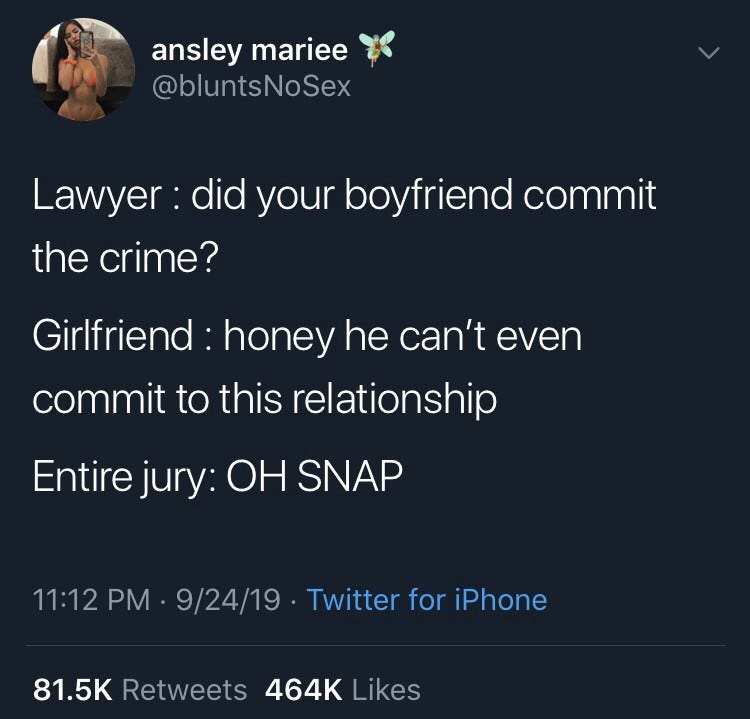 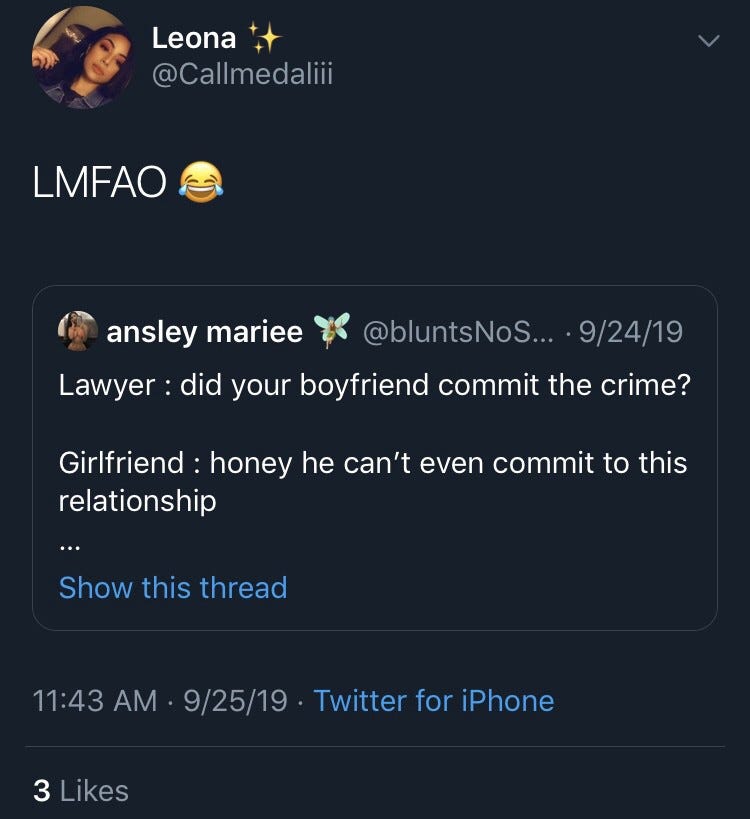 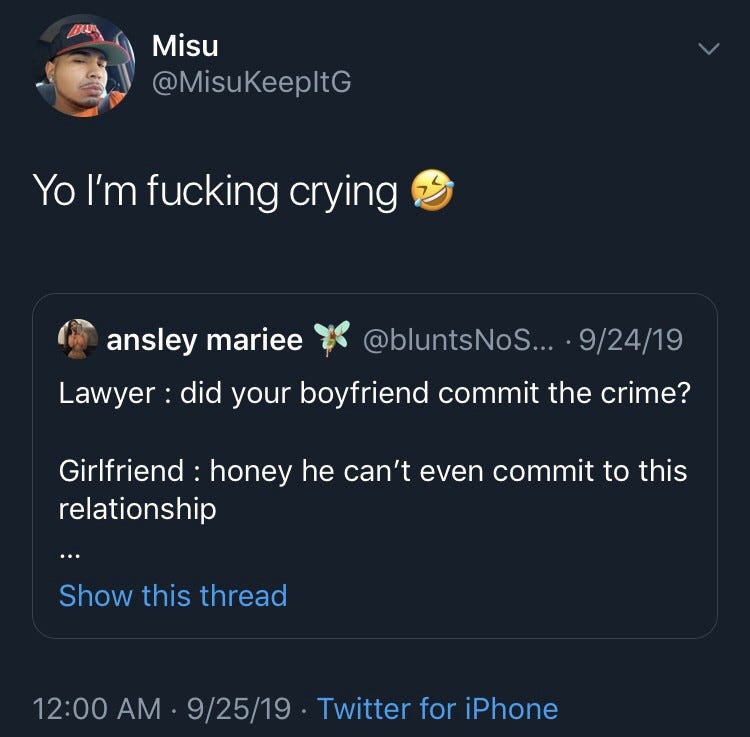 People don't want jokes to be "good" or punchlines to "exist" in the comedy they consume anymore. Even ironic humor has ran its course, and satire is redundantly bland. It seems like, for a while, comedy fans have been living in a "humor purgatory" where nothing could scratch that itch or give them the same highs of yesteryear. Until just recently. For me, at least. A few weeks ago, I inadvertently stumbled upon a video that invoked unknown impulses and mysterious emotions that were hiding in the darkest chambers of my frontal lobe.

Like a maternal messenger of God who was sent to free me, and many others, from purgatory, TikTok user Angelmamii7 came down from Heaven and delivered us forty-two seconds of baffling cinematography that completely redefined and revolutionized the art of sketch comedy. I honestly don't even know if it was intended to be humorous at all or not, but that's what makes it so brilliant. I watched it no less than 700 times and still can't explain any of it, but I know that I love it. That's a sign of true art. The cryptic void of plot points, comprehensive dialogue, discernible punchlines, or any semblance of a climax was the exact recipe that sketch comedy has been missing for so long. We're witnessing the future. AM7's ability to seamlessly change from melodramatic to apathetic, and from Bostonian to vaguely Australian in a matter of seconds, had me clicking the replay button over and over. Words still can't describe what I watched, but I'd best compare it to an eccentric mix of Wes Andersen, M. Night Shyamalan, and an improv teacher with early onset dementia. Somehow, it simultaneously had zero bits yet a buffet of bits.

"We have so much chargers…"

The ominous look of captivity in Darian's eyes during the opening scene had me initially questioning the motives and morals of our heroic angel. Was the idiosyncratic supporting actor in this sketch actually more of a victim than a co-star? 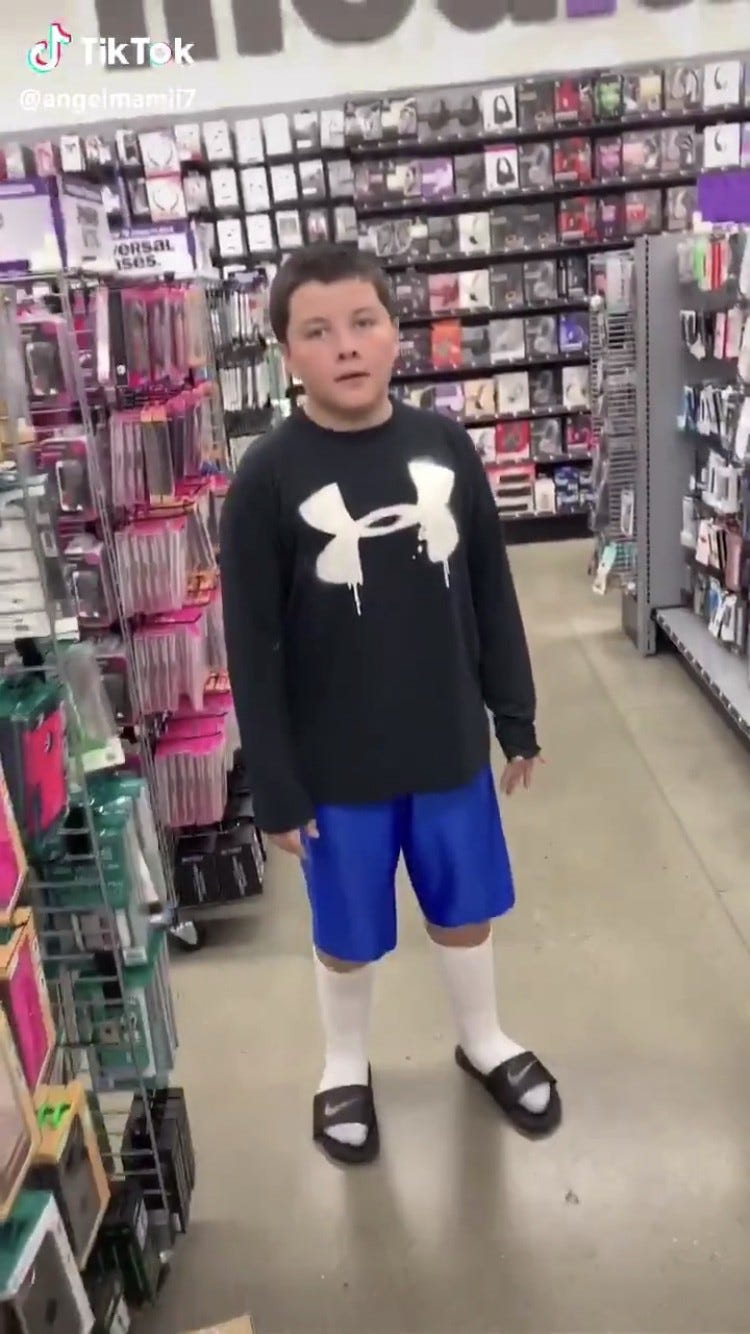 But the impish smirk on his face during the final scene had me questioning if he was actually the villain all along. 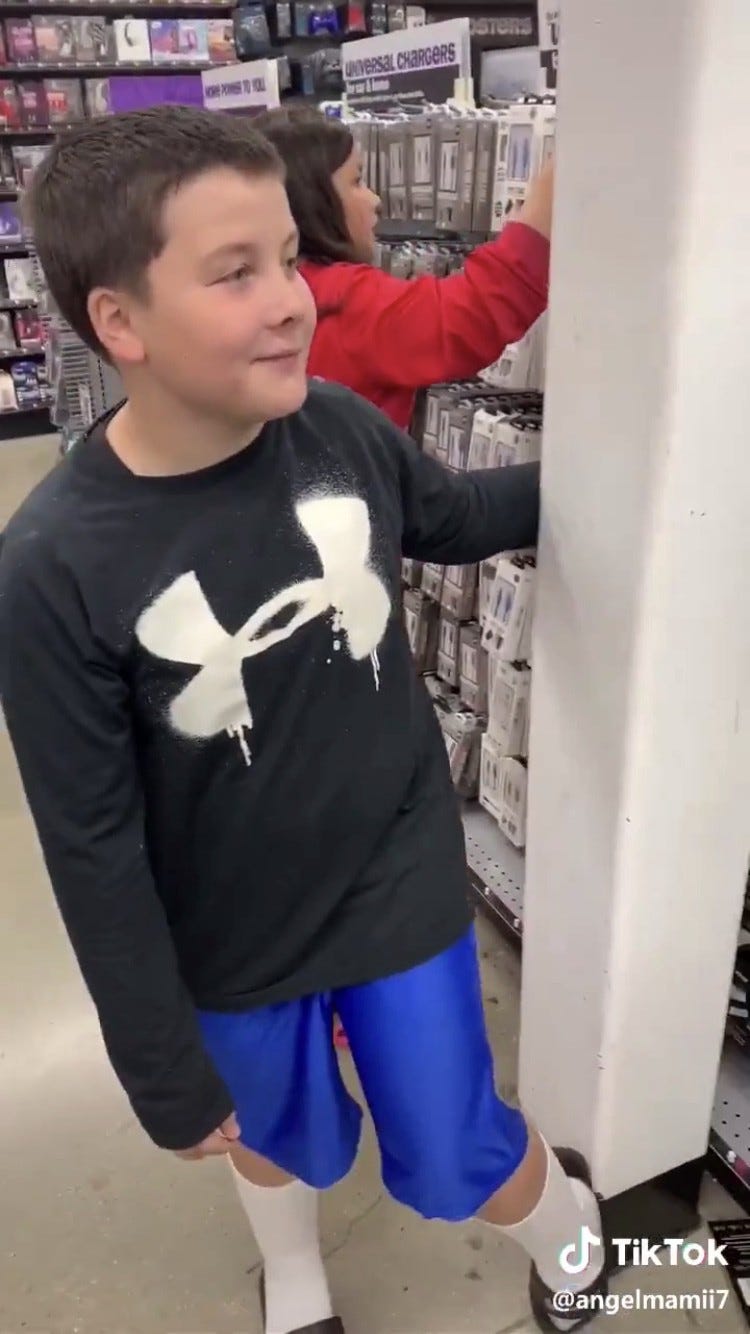 Was Angel Mamii's large, oddly-dressed son actually the bad guy? Or was he innocently and willingly involved? Was he experiencing Stockholm syndrome and starting to find joy and pride in being part of a skyrocketing TikTok career?

It's all too deep for a human mind to understand. Searching for answers will only lead to more questions.

"Androids are trash…make a livin'" - Darian

For example, this enigmatic quote from Darian seemed indecipherable and nonsensical to most viewers, and that's because it was, but I'm positive there was a hidden meaning behind it.

My fan theory is that Mamii used personification here by implying that iPhones, which are inanimate devices, have the ability to "make a living" or earn money. This was done purposely to shed light on the negative implications of a working-class society who lives vicariously through their smart phones.

Bottom line is that AM7 is no fool. She's knows exactly what she's doing, and pretty soon this "comedy style" of posting purposefully nonsensical and absurd content in order to get a reaction from viewers is going to take over the internet. For better or worse, Angel is a pioneer. Also, she's insanely hot.