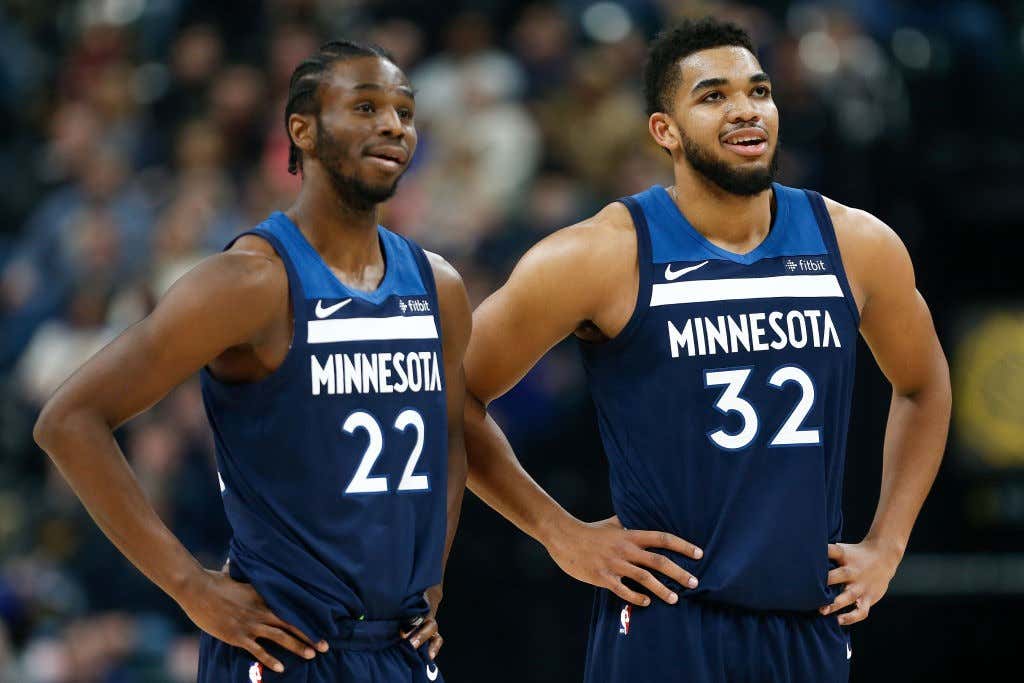 Finally Minnesota with the win! This had to be like the 4th or 5th time I threw them in one of these polls with teams who I thought they could beat and yet they just couldn’t catch a W. Sort of like the last 15 years but who’s counting. Big time win for Deke Zucker that we finally get to talk about his NBA team and I know things might not look the brightest for the Timberwolves right now but if anyone can find the positive in a shit sandwich it’s yours truly. They have a long way to go in order to get back to competing in a loaded Western Conference, but before we get into all that let’s relive the best moments from their 36 win season which just so happened to be the second most wins this team has had in the last 5 years. See? Positive vibes already!

When Jimmy Butler first arrived in MIN he did the unthinkable. He helped carry this Timberwolves team to their first playoff appearance in 14 seasons. Sure they lost in the first round but it was a step in the right direction and immediately made that trade worth it. Well, it took just 13 games and a 4-9 record for him to go all Jimmy Butler on everyone and force his way out of town. It was clear he thought KAT and Wiggins were gigantic pussies and didn’t work as hard as he did and we all remember the infamous practice where he basically told the entire team they all suck and need him to win. Maybe he had a point but it was still a dick move. I’ll remind you that immediately after Butler got traded the Wolves went on an 8-4 run. The final numbers with Butler (4-9, 44% win percentage) compared to the final numbers without him (32-37, 48% win percentage) proved to be basically the same only without the drama. Obviously in a loaded West this had the Wolves finishing a cool 12 games out of the final playoff spot while also owning the 4th worst scoring differential in the West. Only PHX, MEM, and LAL were worse which isn’t the best group to be associated with.

But with the Jimmy Butler drama now a thing of the past, the Timberwolves can focus on getting back to being competitive again and they’re doing it with this roster 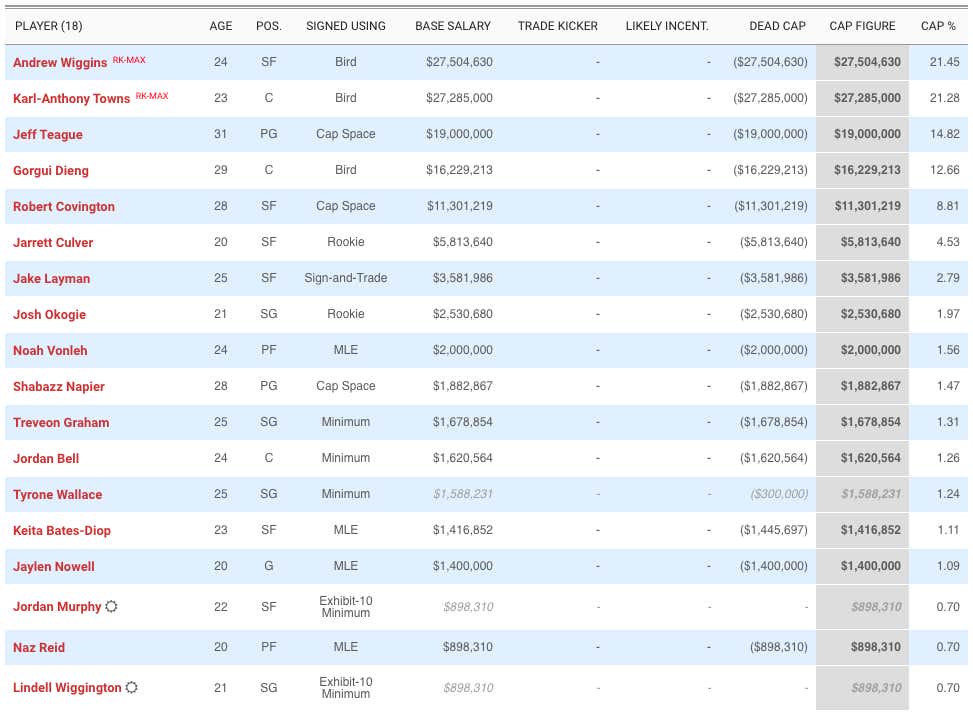 OK, not exactly a group of world beaters but at $128,214,006 this is the 17th most expensive roster in the league. In a sense you get what you pay for. You knew Jeff Teague was opting into that 19M player option and I feel like Gorgui Dieng has had this inflated salary for like 15 years but outside of that and Wiggins’ max deal there aren’t too many bad contracts on this team. The good news is Teague is off the books after this year, and Dieng becomes an expiring deal next year that maybe they’ll be able to flip if they really want nothing to do with him. You look around at who’s left and I see a bunch of solid role players. Not stars, which unfortunately you need, but guys like Layman, Okogie, Vonleh and Bell certainly don’t suck. For guys making little money you can certainly do a lot worse.

If you’re looking for reasons for optimism with this roster, you can start with Robert Covington. He played just 22 games for the Wolves last year but also had his highest scoring average of his career (14.5). He’s an solid wing defender when he’s healthy, and for his career he makes 2.3 3PM which is going to be important for a team that ranked 23rd in 3PM and 20th in 3P%. Everything I’ve read suggests he’s good to go, and on a team that desperately needs defensive help, he’s going to be a factor. Then there’s lottery pick Jarrett Culver. We didn’t see him play in Summer League so if you forgot about him I don’t blame you. Here’s a refresher

Every depth chart I’ve seen has him penciled in as the starting SF so for the sake of this blog I’m going to assume that’s the case. You’d assume he’s going to be a little raw given he’s 20 and hasn’t played at all yet, but he has the potential to be a key piece next to Wiggins/KAT moving forward. As everyone knows, if you may not win a whole lot during the year, it’s always good to be able to invest in a young promising piece.

You know who was once a young promising piece? Andrew Wiggins. While he’s a legit offensive talent, that’s never been a question, everything else about Wiggins has MIN fans ready to move on. He lied his way to that max money which might be the worst contract in the NBA, and nothing we’ve seen at this point suggests Wiggins is going to give any sort of shit on the defensive end. He’s coming off the worst Ortg/Drtg of his career, numbers that have gotten progressively worse in each of the last three seasons and for his career he has a negative VORP (value over replacement) which is never a good thing for a franchise cornerstone player. I will say, he’s only 23 years old so MAYBE one day he’ll figure it out but I’m not so sure. I suppose the positive is that he almost never gets hurt, and then there’s this

but obviously any Wolves fan should be hesitant to believe it until he actually shows improvement. They’re stuck with him given that bloated contract, even though I feel like maybe they come out of left field and enter the Chris Paul sweepstakes, but this team is going nowhere as long as one of their best players is cool with just never getting better.

Which brings us to KAT. Everything we’ve seen and heard from him tells us he’s one loyal dude. He’s in Year 1 of his 5/158M extension so even though his name keeps getting thrown in trade rumors, the Wolves are certainly in no rush. They have like 2-3 years before they have to even worry about him in that regard and frankly they’d be foolish to trade him. He’s only 23 and you just don’t get rid of players that can do this

until you absolutely have to. But honestly, a lot of the same questions that people have about Wiggins, are also sort of true for KAT. Will he ever be able to defend at an elite level? Does he care/work hard enough? Will the Wolves finally realize they should GIVE HIM THE BALL? That was always so confusing with Thibs, just downright refusing to use his best player. We did see his usage jump to 28% last year, but he needs to be well in the 30s on this team.

In order to see real improvement with this MIN they don’t even need to do anything all that crazy. Just be close to league average. Instead of being 24th defensively, just try and make it to like where the Mavs were last year. That was only a 110 rating and it was good for 18th in the league. You add Covington and get any sort of progress from KAT/Wiggins, is that really unrealistic? It’s also important they don’t overthink things offensively. Post ups are your bread and butter. The Wolves ran this the 3rd most in the league and only the Spurs were better at it. PHI was #2 and their center is pretty damn good, but all the signs are there that this team is at it’s best when they play through KAT. Let him carry you.

But how about this. How about you run more P&R with KAT and actually utilize the roll man? Did you know MIN ranked in the 82nd percentile in roll man scoring, yet were outside the top 10 in frequency? How about you run less isolation which you stink at (37th percentile) and you tell Jeff Teague to run a goddamn P&R. Stop giving it to Wiggins and letting him create on his own and actually run an offense. You have the pieces to do it.

Then you look at their bench. Last year this was the 21st best scoring bench in the league. Gone are DRose, Saric, Tyus Jones, Jerryd Bayless, and Anthony Tolliver. If they end up moving Okogie to the second unit, could they be better than 35 points a night? You may not believe in Jake Layman, but he was pretty damn good for POR last year and his Per36s of 14.7/5.9/1.4 on 50% shooting certainly don’t stink. If Okogie starts and they bring Culver off the bench to get his feet wet against second unit players even better. Noah Vonleh balled out last year (by his standards) for the Knicks and maybe there’s something there.

The point is, when you aren’t exactly a free agent destination, you have to rebuild differently. Draft smart and find low cost free agent help. We’ll see if they made the right move on Culver, but he was the best available at the time, and if we see any sort of improvement from Wiggins/KAT on the defensive end this shouldn’t be a total disaster of a season for MIN. A playoff season is surely out of the question barring something crazy, but they certainly won’t be among the worst teams in the league. NBA purgatory STINKS, but that’s sort of where MIN is at right now.