I don’t know if that headline is true and frankly I don’t care. I’m not here to fact check team records and investigate claims made by me. That’s someone else’s job. For now let’s focus on the fact that Joe Maddon is heading back to Los Angeles to round out his ridiculous career across baseball and for the life of me I really couldn’t be happier for the guy. Try to argue otherwise:

People forget Maddon spent THIRTY ONE YEARS in the Angels organization to start his career. The first 4 years that meant platoon catching single A pitchers and slugging .356. Then a cup of coffee as an entry level scout. Then a roving hitting instructor meaning you don’t work for one minor league team, you work for all of them. Traveling around working with guys, pretending that the organization gives a shit about their development while you grind away on the job hundreds of miles at a time.

Then Joe becomes the rookie league manager in 1981, long before your dad could brag about the 1985 Bears if you want some perspective.

He then managed 4 season for the Angels lowest minor league team going 126-154. Pathetic. Then he got bumped to AA for some more below average experience before getting called back to being the roving minor league instructor for another SEVEN YEARS.

If you’re following along closely it’s 1993 and Joe Maddon has done nothing but work the minor leagues for a solid 19 full seasons. Think about where you were 19 years ago.

From there, Maddon settled into the big league dugout as the bench coach through 2006, winning a WS in 2002 under Mike Scioscia. He would then be hired by the Rays where the rest is literally history: 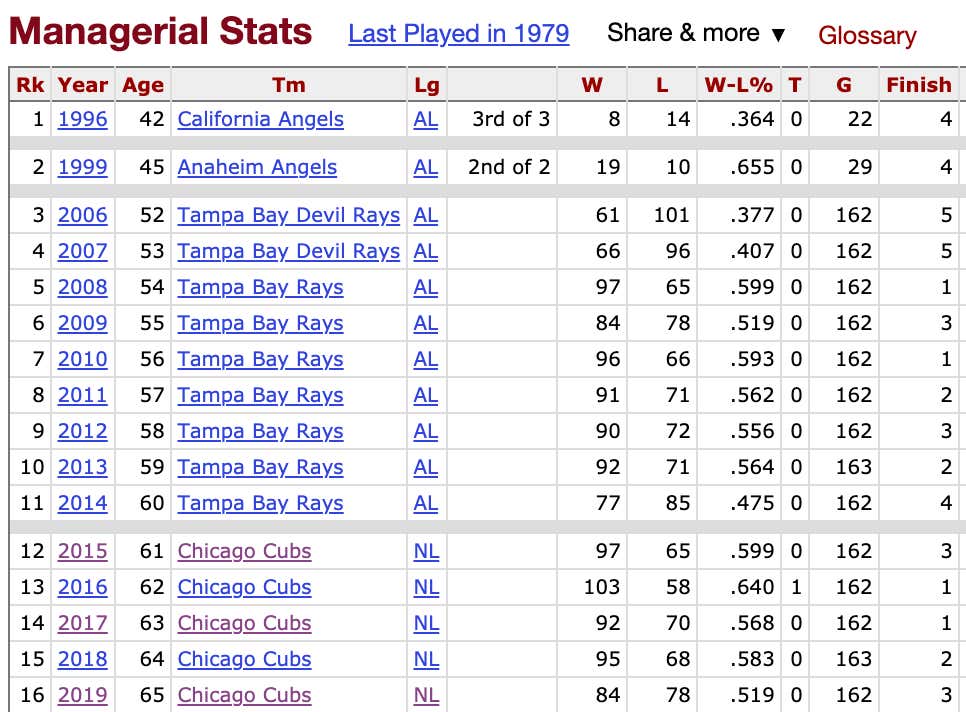 Joe Maddon’s in his 45th professional baseball season and he’s finally coming home to run the organization that originally put him in the game. If that doesn’t get your blood flowing as a sports fan much less as a human being then unfortunately you’re probably dead.

This is one of the many reasons baseball resonates so deeply with people. It’s literally your life to make it in this game. The names that make lasting impacts aren’t the most talented, or the smartest or anything. It’s the obsessive weirdos that are willing to give up everything because they can’t stop chasing a dream. Usually that means grinding and working towards something no one else but you can see, and anyone who’s been there knows it sucks.

Credit to Joe Maddon for embracing the slow burn. You know that 19 season struggle from 1975-1993 had to be absolutely miserable but at the same time you know Joe LOVED it. Only a real baseball guy could pull that shit off.