But the calendar has turned and turned, the leaves are about to start falling… ITS HOCKEY SEASON AGAIN.

Today is October 2nd, 2019 and the St. Louis Blues are going to raise a Stanley Cup Banner to the top of Enterprise Center tonight that will hang there forever. The past few months has consisted of Blues fans watching the highlights back over and over. It is real but somehow it still feels like it didn't happen on this planet. I don't know about you, but I feel like nothing could ever go our way again and I would still be happy. Realistically, there may be nothing that will ever be as fun as that parade down Market St. and that's ok! Even if the Blues win the next 3 Stanley Cups, the first time will always be a legendary moment in the history of St. Louis that can never be touched. So where do we go from here then? I've thought about it a lot because it feels kind of weird.

The Blues roster looks very similar to the team that secured Lord Stanley just a few months ago. This is a good thing obviously because the evidence of what this team can do is very clear. The bad thing is that this same group just absolutely BATTLED and beat themselves down for 26 playoff games, partied for a month straight, and went straight to training camp. There is a reason it is SO hard to repeat and all of these factors are going to play into the Blues success this season. There is no way there won't be a few tough stretches as guys get a little burned out over such a grind of a season following such a stressful Spring and Summer. Overall, I will be happy as long as they can do enough to get into the playoffs, and then go from there. That shouldn't be a huge issue as long as there is no enormous letdown from Binnington which I don't anticipate.

Let's get into the roster: 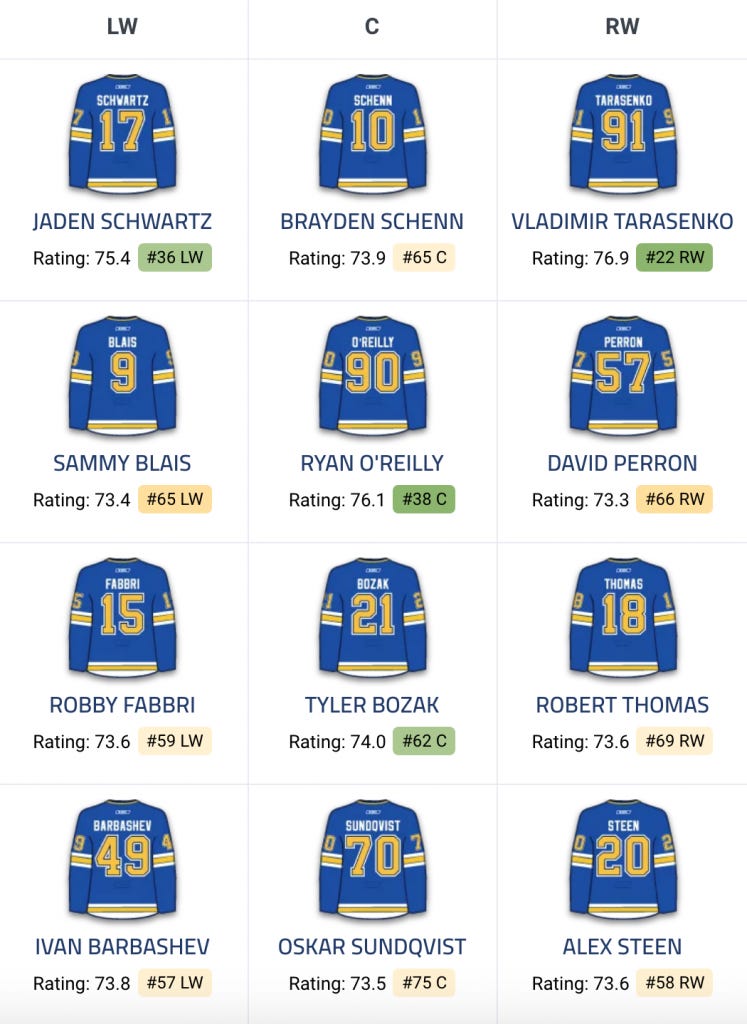 The Blues forward group is largely unchanged, other than the subtraction of the Big Rig Pat Maroon. They are starting with very similar lines to what ended the playoffs and why wouldn't they? Schwartz-Schenn-Tarasenko has been a lethal unit and I think they can be even better with less pressure on them now. They got over the hump, they are champions, now they can just play hockey. Schwartz had a down season in the regular season last year but absolutely came alive in the playoffs. I think we will see more of the latter this year rather with a return to 50-60 pts.

Blais-O'Reilly-Perron is another unit that was clicking at the end of the playoffs and could be a chance for Sammy Blais to breakout into a way bigger role. We've seen his skill plenty of times…

And I think with a year under his belt, he could really put up some solid numbers on this line. O'Reilly and Perron are hard working forecheckers that also possess a shitload of skill in tight areas. I think Sammy Blais will find himself on the receiving end of some beautiful passes over the course of the season as a result and put up 15-20 goals.

The third line right now is the old Big Rig line with Fabbri sliding into the spot previously occupied by the Oakville native. After a few tough years bouncing back from unfortunate injuries, I think Robby Fabbri will go nuts this year playing with a realiable center in Tyler Bozak.

Robert Thomas was an absolute stud as a rookie last year and made some huge plays in the playoffs such as setting up the Big Rig's 2OT tally. He played through a brutal wrist tendon injury for half of the playoffs and was able to gut it out to help bring St. Louis its first Cup ever. This year, he's not just the young guy anymore and has a really good chance to build on his point totals from last year as he grows with a season of NHL experience under his belt.

The Blues 4th line may just be the best in Hockey and its not really a fair competition. All 3 of these players are much better than a traditional "4th Line" and have all played huge roles in the past. There is an argument to be made that this line was one of the main factors in the Blues going all the way last year and if you remember the games where Sundqvist and Barbashev were suspended, it only supports that theory. The Blues SUCKED without them and their importance can't be understated. Penalty killing and physical forechecking are so important to the way the Blues win games and I think that will only get even clearer this season.

Klim Kostin has made waves out of training camp and the Big Russian could be a solid option to fill the hole left by the Big Rig at some point during the season. Jordan Kyrou also figures to be in the mix at some point as he recovers and regains agility after a brutal knee injury. Depth depth depth is the key and the Blues have it in spades. 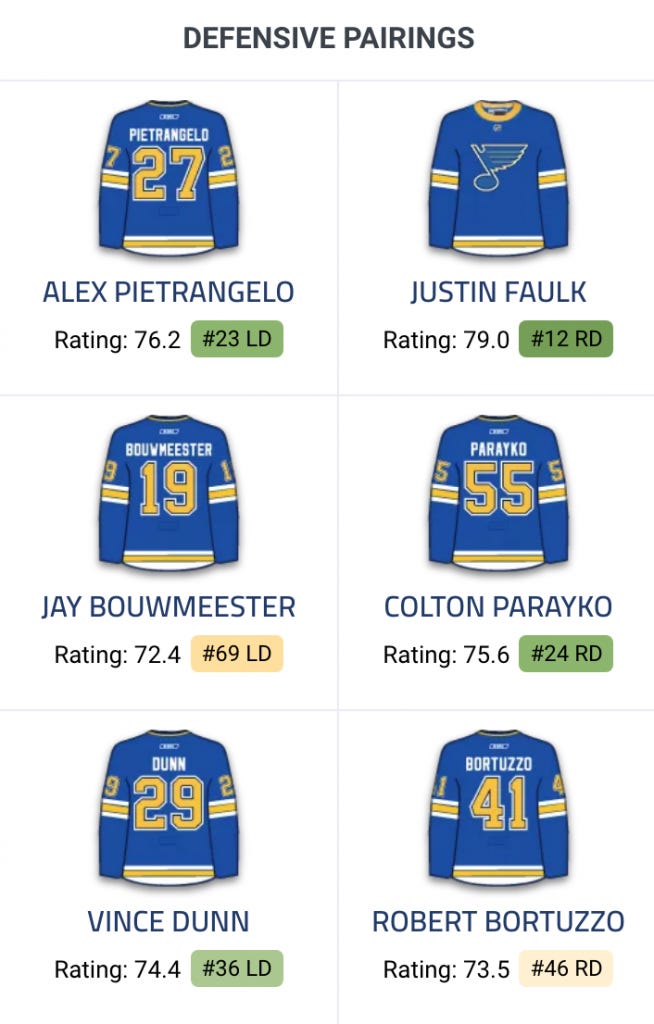 Returning a Stanley Cup winning defense corps almost entirely intact is one of the most valuable pieces any team could possibly ask for. The familiarity, accountability, and consistently that comes with playing with the same guys that you just played some of the most high pressure minutes possible with is INSANELY valuable. You would have to think that teams like the Penguins, Blackhawks, and Kings all sustained such dominance for such long periods of time recently due to the experience their core accrued during those long seasons and playoff battles. They know what it takes to win and have a distinct blueprint of how to replicate it.

Pietrangelo/Dunn/Parayko/Bouwmeester/Gunnarsson/Bortuzzo have all been in very stressful situations this Spring and came out on top. Suddenly playing the Senators on a Tuesday night in November probably doesn't seem as difficult. This is not to say things will be easy, every indication is that it will not be, but the "sky is falling" meter might be a little further out of reach than it was before.

Vince Dunn looks to take a big step this year from talented rookie to a cornerstone of the Blues blueline for a long time. Settling down a little bit and limiting turnovers while maintaining the level of creativity from last year would make him a HUGE asset going forward. As for the new addition, Justin Faulk, the sky is the limit. He has been an extremely effective powerplay QB in Carolina and if you watched a single game in the playoffs last year, you would know the Blues COULD USE SOME OF THAT. People forget that the PP was like 1 for 24 for stretches of that playoff run. Imagine if they could have converted 2 more of those it would have transformed everything!

Right now, he is being slotted next to Pietrangelo which would be one of the more lethal top D-pairings in the league. I wouldn't be surprised if Dunn spent time with Petro as well like we saw last season but either way its a good situation.

Mitch Reinke is a name that I think Blues fans will be very familiar with by the end of the year. Whether through trades, poor play, or injury, the NHL season has a way of shaking out teams depth over the course of the year and I think Reinke will get a chance to shine very soon. #39 lead the AHL in rookie defenseman scoring last year and could be a huge factor for the Blues for a very cheap price.

Jordan Binnington almost single handedly turned the season around last year. Its a story that has been told a thousand at this point, but it deserves to be beaten into the ground because it was nothing short of legendary. Everyone is quick to predict that he "probably won't be as good this year" which is really going out on a limb since no goalie in history would be reasonably expected to replicate a 24-5 record over the course of an 82 game schedule. I am more comfortable with people doubting him than praising him. Even if it results in quotes like this…

I am excited to see Jake Allen this year and think he will have his best performance in years.
He has always seemed to play better in a tandem when there is healthy competition rather than being the only option. He is a very capable goalie and I think will be even better this year now that the anxiety the fans have held for so long should be gone.

The mid-season coaching change boost is one thing, but sustained success is a new challenge. Chief Berube was nothing short of a sensation last year, taking this team all the way to Stanley Cup Final for the first time in 50 years only to finish the job in dramatic fashion. He pushed the right buttons, had his player's back, and dealt with a ton of adversity filled situations like the infamous Hand Pass against the Sharks. This type of attitude will be important for a team coming off of a summer where they have celebrated nonstop and been the toast of the town. I don't see Berube as being a guy who is going to let people coast on their accomplishment but rather will whip some ass to ensure complete focus.

Overall, the Blues will raise the banner and the season will start, but it probably won't sink in for a few weeks or a month that this summer is really over. The entire key will be staying afloat and winning enough early to be able to recover from the Cup hangover and still make the playoffs and then go from there. Repeats are EXTREMELY rare in the modern era and even the best teams struggle after a short summer. With that being said, this group is almost the exact same as last year and has added a huge weapon on defense in Justin Faulk. There is no reason on paper why they can't do it.

After 52 years it seems greedy to want another one so soon, but winning is ADDICTING. The parade was probably the most fun day I could ever imagine in human life and all I want is another one. Hockey Gods, I know you just answered our prayers, but we have done everything right this summer!

We want it again so bad! Boris has been on vacation all summer and he is getting chunky. The dude NEEDS TO DANCE again! Let the rat dance and let's get another beautiful silver addition to the trophy case. LET'S GO BLUES!!!!!!!!!!!