[Source] -The settlement restores Hancock’s status as the Most Outstanding Player from that Final Four in Atlanta. Hancock scored 42 points in two games as the Cardinals defeated Wichita State and Michigan.

Besides Hancock, the other players involved in the lawsuit were Gorgui Dieng, Stephan Van Treese, Tim Henderson and Michael Marra. All of their playing records and statistics have also been reinstated.

This whole thing cracks me up. Remember the 2013 Final Four? Apparently you can’t because Louisville doesn’t have a banner anymore. It’s like the NCAA has access to the Men in Black devices that just wipe our memory. But now what happens when players have stats from those games that didn’t happen? Because that’s where we are now thanks to Louisville players suing the NCAA.

What’s with Louisville and their lawsuits though? It’s almost as bad as their performance against Kentucky. Can’t even get a banner back after they agree that your stats are returned to the record book. It’s like when Pitino settled for $0 after suing for $40 million.

I think Pitino needs to adjust this tattoo now. Just make it say Luke Hancock MOP. That would be factually correct. 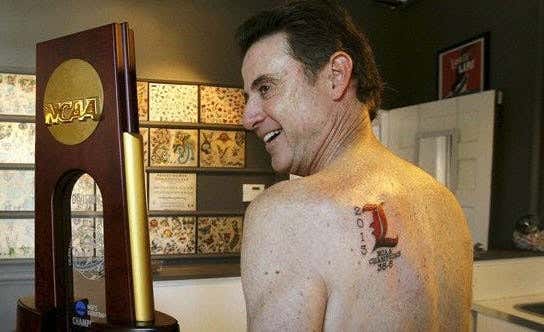