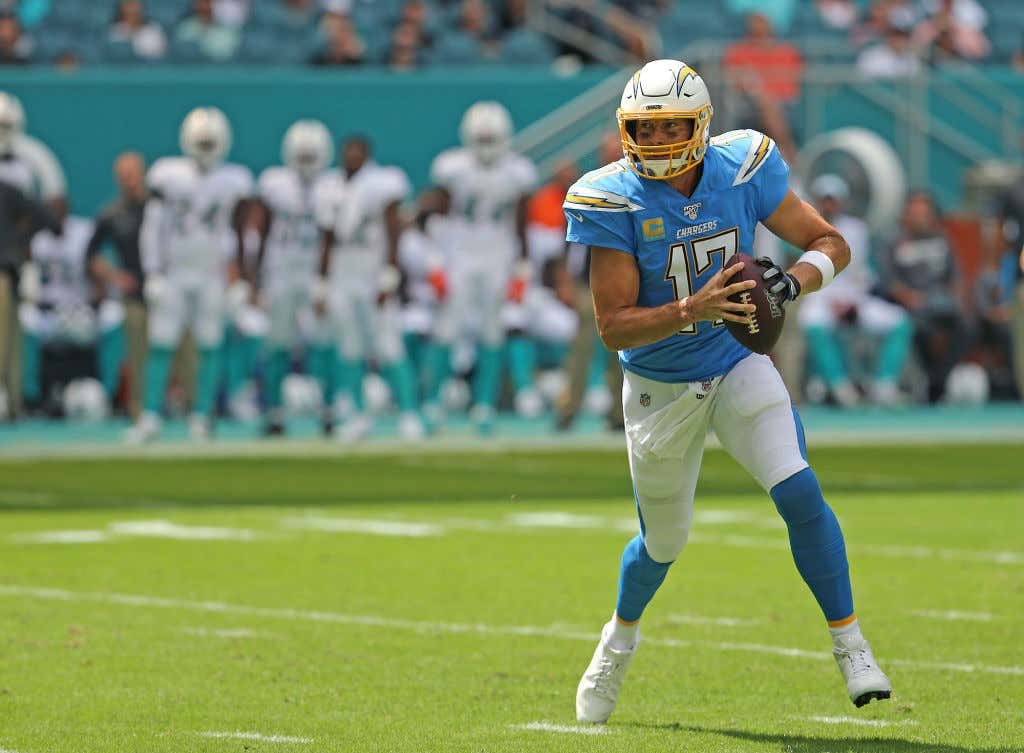 Yes, I was terrified that they were going to blow this one vs the worst team in the league. Thankfully, the football gods spared me of that and the Chargers won by a final score of 30-10. (P.S. sorry for the lack of a full divisional recap today, I’m under the weather and back-and-forth between some appointments with a dr.)

In a weird twist of fate, the Chargers offense performed consistently across all four quarters despite the myriad injuries to their skill players. Going into this one, they were down Mike Williams, Justin Jackson, Hunter Henry, Travis Benjamin and Virgil Green. That left them with a starting unit of Ekeler/Troymaine Pope at RB (Melvin wasn’t expected to play today unless totally necessary), Keenan/Dontrelle Inman/Andre Patton/Geremy Davis at WR and Sean Culkin alongside the newly signed Lance Kendricks at TE.  Missing your WR2, WR3, TE1 and TE2 is never great, but Rivers adapted great as he always does. He found 9 different receivers before the first half was even out, finishing the day 24/30 with 310 yards and 2 touchdowns. Ekeler was the star of the day, finishing with 5 receptions for 62 yard and a TD, and struggled a little on the ground averaging 3.3 YPC with 60 yard and another TD. The Dolphins actually did a good job covering Keenan Allen, forcing Rivers to look to Inman who ended with 5 for 76 yards. Offensive line was about as good as I had hoped vs a depleted Miami roster, and Forrest Lamp even got some action. Hooray!

Defensively, they struggled bad in the opening quarter. Davante Adams froze Desmond King on a double move and blew by for an easy touchdown, but after that they sturdied up well. This was partially due to the Dolphins abandoning the run despite Kenyan Drake running rampant on them. Thanks, Brian Flores! Despite being burned for the TD, King rebounded for a wild 2.5 sacks (nearly a safety, idk what Rosen was doing), Thomas Davis, Bosa and Tillery all had a half sack as well. Michael Davis had his first career pick and Rayshawn Jenkins was all over the place with 6 total tackles. They’re still a considerably worse unit without Derwin, but Teamer didn’t get shredded up like last week which was promising.

Notes: Melvin Ingram hurt his hamstring in the first quarter but didn’t return. Apparently he thought he was good to go back, but was stopped just in case (thank god). Sean Culkin tore his achilles in the fourth quarter on an awesome catch. Prayers up cause that is a shitty injury. Dontrelle Inman also got hurt in the fourth (quad) and didn’t return. So no they are down WR2, WR3, WR4 and TE3. Cool! As it stands, this just doesn’t look like the same team as last year between the injuries and the lack of tempo on both sides of the ball. They host Denver next week in what should hopefully be another ass-whooping vs a very defeated team.