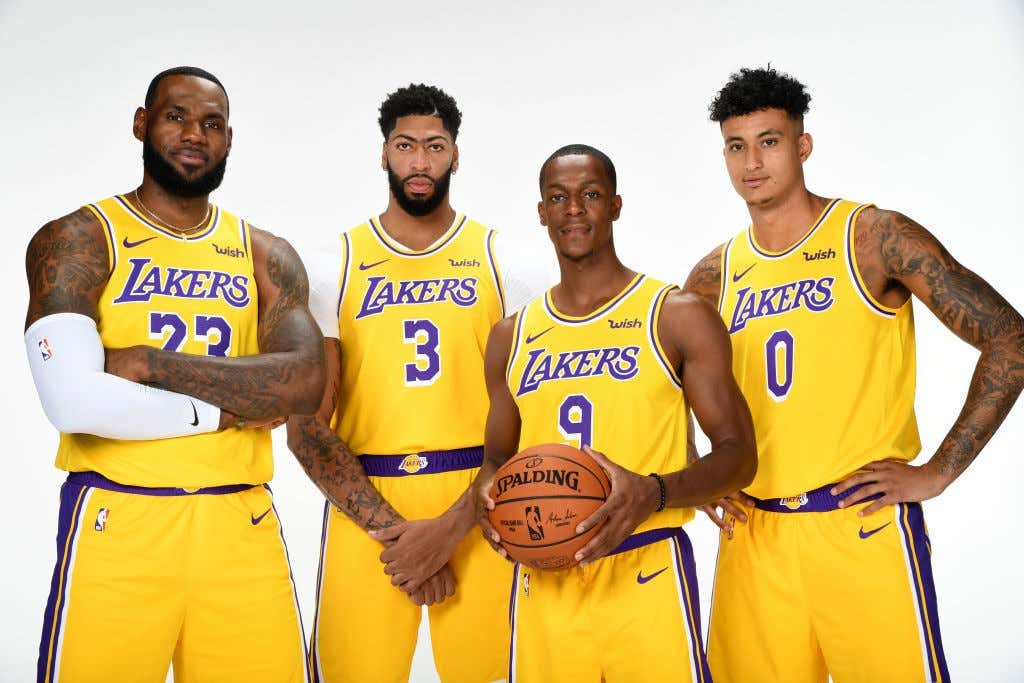 We officially made it. On Friday we saw the six teams that are playing overseas in preseason kick off their season with media days, and now today we have 23 more set to kick things off. We even get some preseason basketball action tonight with the Rockets playing the Shanghai Sharks. It’s been 109 days since we last saw any sort of game action from the real NBA squads and frankly now that we’re here it sort of flew by. It does feel like Kawhi and the Raptors just shocked the world, but think of how much has changed in those 109 days. By all accounts we’re about to enter the craziest, most wide open NBA season in recent memory. What’s crazy is we pretty much said the same thing last year, and it’s even more true this season. The amount of intriguing storylines we have entering the 2019-20 NBA season has to be the most in years, so why not talk about them? This probably won’t even be everything, but for me these are the biggest

The Battle Of LA

Both the Clippers and Lakers had monumental summers. Some might call them franchise altering. They both mortgaged their futures to bring in elite blue chip talent in an effort to create dynamic duos. Both enter this season with NBA title expectations and while the Lakers may have the edge in top end talent, the Clippers have the edge when it comes to their overall team and depth. It feels weird that the Lakers could be considered the second best team in their own city, but both sides do have questions. With the Lakers it’s obviously if AD/LeBron can stay healthy and then how the rest of their roster will produce, for the Clippers it’s if they can survive while Paul George recovers and if Kawhi alone can be enough to keep a team that was really a 7/8 seed for most of the year in the top of the conference.

I think so far we’re in a situation where Lakers fans are in a bit of denial in terms of how good the Clippers are, while Clippers fans may be getting a little ahead of themselves since they pulled off the heist of the summer.

The Sixers have to make the Finals

It’s the same old story every season. The Sixers look “great” on paper, everyone in the media picks them as the best team in the East and how they have the most talented starting five in the conference. Then they lose in the second round. The idea of the rebuilding “Process” is over. You have the talent, you have the NBA Finals expectations, now you have to do it. They just invested huge max money to Embiid/Simmons/Harris, gave Horford like 100M (if he hits incentives), and now it’s time for them to stop talking about it and be about it. Their defense is going to be ridiculous, I’m talking best in the NBA by a wide margin ridiculous, but there are still serious questions about their depth and their shooting. There are a handful of teams that enter this season with a shit ton of pressure, and Philly is near the top of the list. There’s no LeBron, there’s no Kawhi, there’s no excuse for this team to not make the Finals if they are really as good as people keep saying they are.

We say this almost every year, but the West this season is even more ridiculous than ever before. Last year, you could win 48 games and all that did was grant you the 8 seed. You could make the case that 6 teams in this conference all have NBA Finals expectations (GS, DEN, HOU, POR, LAC, LAL) and then you have teams like UTA that may not make the Finals but is expected to take a leap. You look at even the teams that could miss the playoffs (SAC, DAL) and they are loaded with talent.

We could very well see a situation where a 50 win team is a 7/8 seed and the playoffs are absolute madness.

The most hyped rookie since LeBron, I think we’re all itching to see how he actually looks at this level since he played only 9 minutes of Summer League basketball. We know he can dunk and him and Lonzo Ball are going to be awesome in transition, but how will the rest of his game look? The Pelicans may not win a ton of games, but they are going to be worth watching simply due to the Zion factor.

Deservedly so Kyrie Irving took a lot of heat for how his Celtics tenure ended. He choked on the biggest stage of the season, wasn’t the best leader, and now finds himself in a new situation. What’s interesting is the Nets are a lot like the Celtics pre-Kyrie. They play hard, they are well coached, they had a good amount of success without Kyrie with an All Star point guard, and they’re young. This is a huge opportunity for Kyrie to prove that he perhaps wasn’t the main problem with those Celtics teams. Not only that, but Year 1 Kyrie is so much fun to watch on the basketball court. He’s most likely going to play some of the best basketball of his career (much like he did in Year 1 in BOS), and that is wildly entertaining to watch.

But there are questions if he can really be “the guy” Those CLE teams never won, the Celtics went further without him and lost in the second round with him, and now that he won’t have KD this season it’s another opportunity for him to prove that he can be a #1. So far the results suggest otherwise so this is a huge prove it year for him.

The pressure on the Bucks

Listen, if Giannis is going to be the next LeBron in terms of the best player in the league, it’s time for him to make an NBA Finals. Period. The Bucks had a historic season last year only to choke it away with four straight losses in the ECF. They mostly reinvested in the same group we saw last year, and with Giannis’ potential free agency looming this team cannot take a step back. They have a lot of the same pressures as someone like PHI where it’s one thing to be awesome in the regular season, but if you can’t break through in the playoffs then what’s the point. It’s basically Finals or bust for this group, because when you have the MVP, a solid coach, and are coming off a 60 win season, anything less than that is a failure.

Everyone is counting the Warriors out for the most part. They’re injured, they just lost a top 3 player in the NBA, and for most of last season their defense sort of stunk. Well all this tells me is we’re going to get an extremely motivated Steph Curry and that’s pretty goddamn terrifying. It wouldn’t shock me if we see him rival his MVP seasons. There’s no Durant/Klay to share shots with, so we might see Curry’s highest usage ever. With DLo in the mix chances are we see a lot of Curry off ball/coming off screens where he’s only the deadliest shooter alive. Remember how fun it was to stay up late and watch early Steph Curry bomb it from 40 feet? I feel like that’s the season we’re about to get.

Of all the teams in the West that have NBA title hopes and pressure, the Rockets are at the top of the list. Their one boogeyman team in GS is wounded (at the moment), and in my opinion they upgraded their point guard position and brought two former MVPs back together for a run at the title. You want to talk about title windows, well we are right in the middle of HOU’s. They brought everyone back and added Russell Westbrook, there are no excuses at this point. The Rockets are committed to this group moving forward, and barring any sort of injury they are another team where it’s basically title or bust.

What we don’t know if it will actually work. Will Westbrook’s lack of outside shooting be a real problem? What about his and Harden’s usage rate? Remember there’s only one ball as they say. Defensively they were a disaster to start the year and don’t have their defensive specialist on the coaching staff anymore. This experiment is either going to work flawlessly or be a colossal disaster, there’s no in between.

The Celts have a lot of decisions to make this season when it comes to their young talent. After last season was a complete shit show and this veteran vs young player battle, they clearly underachieved and had one of the more frustrating seasons in recent memory. Well now Kyrie/Mook/Rozier are all gone and they brought in great chemistry and All NBA talent Kemba Walker. The kids need to show that last year was an exception and not the rule or the entire direction of the team is going to have to change. We also are going to see how they handle replacing Al Horford which is pretty much impossible given everything he did for them. Then there’s Gordon Hayward and how he looks and if he can get back to being the player he was in UTA. There are definitely a whole lot more questions than answers heading into this season.

So while they may not have NBA Finals expectations like some other east contenders, this season is just as important for their future. Jayson Tatum needs to take a leap, period. He needs to show he can be a cornerstone piece moving forward. Jaylen is playing for his next contract and who knows how he handles whatever role Brad gives him. Speaking of Brad, huge pressure on him too after what was a failure last year. If things go right their ceiling can be pretty high, if it’s another repeat of last season, well they might not even land a top 4 seed.

I could go on and on but this feels like a good place to call it. The point is we are about to get one of the best NBA seasons in recent memory, which is why everyone should be praying for health. The next 9ish months are going to be absolutely insane, and frankly I cannot wait. Basketball season is back baby, and it’s better than ever.