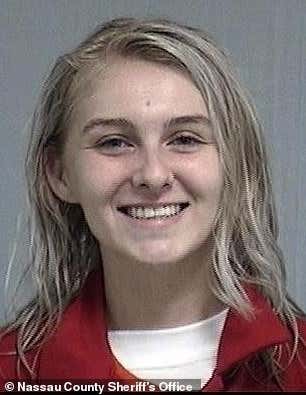 Source – A Florida Woman who “wanted to eat more than her fair share of tomatoes at the dinner table” is facing criminal charges after allegedly assaulting elderly relatives who thwarted her grubby vegetable gambit, records show.

Katie Jade Gates, 19, allegedly became incensed when she was denied additional tomatoes during supper on September 12 at her family’s home in Callahan, a town 20 miles north of Jacksonville.

Gates’s grandmother told police that the teenager “began to throw a fit because she couldn’t have more tomatoes at the dinner table.” Gates allegedly threw a water bottle at her grandfather and a pack of cigarettes at a 73-year-old female relative (who was struck in the eye by the airborne tobacco).

When confronted about her behavior by her grandfather, Gates allegedly grabbed a knife and began threatening him with it. “Motherfucker, I’ll stab you in your fucking face,” she said, according to a Nassau County Sheriff’s Office report. Gates, witnesses told cops, chased her grandfather with the knife and poked the weapon at his face.

During police questioning, Gates reportedly admitted hitting her relative in the face with the cigarette pack. She also acknowledged picking up a knife and approaching her grandfather, but denied “attempting to strike him with the knife in her hand during the argument.”

I’m not one to advocate violence. But sometimes you can only drive a 19-year-old Florida woman so far before she needs to take action. And if ever there was a moment to go all Walker & Texas Ranger on your grandparents, well Katie Jade Gates had been pushed to her limits.

Hey you old farts, what do you want out of Katie? What’s the first thing grandparents tell their grandkids? Eat your vegetables. Well that’s what she was trying to do! I mean, what’s your problem with her loading up on nature’s least scarce resource? Tomatoes don’t grow on trees? Yeah, I think they sort of do. The fricking things are everywhere. Piled high in the produce aisle in every size and shape. In every bottle of ketchup. In every jar of pasta sauce. It’s not like she was trying to steal your Social Security check, your Oxycodone or your Viagara. Let the poor girl load up on her fruit of the vine and leave her the hell alone. Or don’t be surprised if you find yourself staring down the business end of gleaming, razor sharp, pointy death.

Just look at how upset Katie is in that mugshot, fighting through the trauma of being starved by these ingrates. Grandparents like these are lucky to be able raise such a fine, young Florida woman. You’d think they’d be a little more grateful.