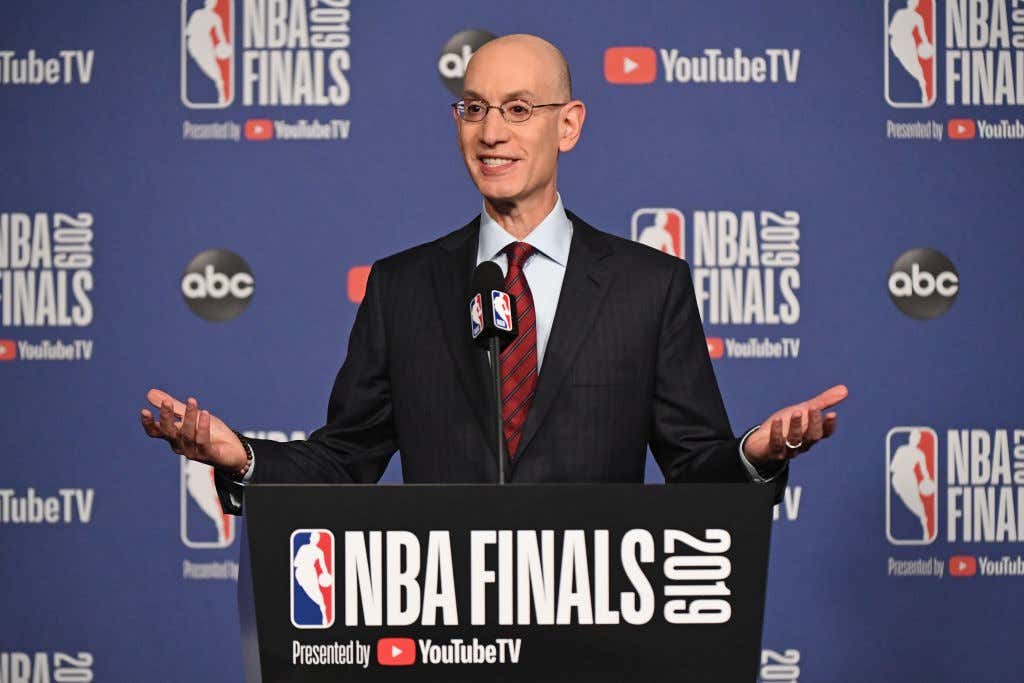 (ESPN) – The push to strengthen tampering rules — including a huge increase in the amounts of potential fines — was born out of a historic free agent period that witnessed several stars change teams in an acrimonious climate. The recruitment of Kawhi Leonard became fraught with charges that his uncle and advisor, Dennis Robertson, requested benefits outside the boundaries of the salary cap, league sources said.

Whatever apprehensions exist in the rank-and-file of the league, the league’s owners made it clear at a July Board of Governors meeting in Las Vegas and privately with Silver that they wanted change that would help level the playing field.

Approval of the league’s anti-tampering proposal requires a “yes” vote from 23 of 30 teams. The league rarely brings such matters to a vote unless it is confident it has requisite support; the failure of the league’s initial proposal to tweak the lottery odds in 2014 was a rare public defeat.

Small-market teams, fearing the free agency allure of big-city rivals, may line up to support the league’s proposal on Friday – as well as teams embittered by recent free agency defections. Those who vote against the new measures risk the perception that they condone cheating, even if other reasons colored their decision

Listen, fans and NBA owners/GMs only hate tampering when they aren’t the ones benefitting from it or a successful tampering ploy snags one of their better players. That’s a fact. Everyone does it and that is not a new concept. It’s why I felt like the Celtics and Danny Ainge were being little bitches complaining about the Sixers blatant tampering with Al Horford

while at the same time 100% tampering with Kemba Walker. Yeah there are “rules” and it sucks for small markets who lose their stars but tough shit, them’s the breaks. Players are going to recruit players, teams are going to definitely not wait until free agency to work out deals, there will never be a day when tampering is 100% out of the NBA. Shit, tampering is the reason the NBA is so much fun. Every All Star Break you see guys recruiting with secret conversations in hallways and whatnot. Tampering is as much a part of today’s NBA as small ball lineups or doing nothing but shooting threes. So while Adam Silver will give everyone lip service and say he’s doing all he can to level the playing field, in reality nothing is going to change. Even with these new rules

- an increase in fines (from a maximum of $5 million for tampering to $10 million) that mostly mirrors the increase in franchise values and player salaries over the last two decades;

– allowing Silver to (in theory) take draft picks as punishment for any “conduct detrimental to the NBA”;

– the annual random audits of five teams and a brief mandate that “where cause exists” the league may “undertake more in-depth investigations.”

– the requirement that top team officials save communications with agents for one year.

nothing is going to change. Magic isn’t in a front office anymore so any GM worth anything isn’t going to leave a paper trail. It doesn’t matter if the fine is $5M or $10M or $50M, if you’re an owner and your team just landed say Kyrie Irving and Kevin Durant, you’ll pay whatever that fine is every single time. It’s not as if Silver was powerless before this goes to vote tomorrow, he can look at text messages and emails and take draft picks already. He doesn’t. You know why? Because this shit is impossible to prove. Even if he sees GM X is calling Player Y every single day during the season, they can’t prove tampering since there’s no way to know what they talked about. Teams and agents reach deals well before free agency starts too, which is why we get a Woj/Shams bukkake of tweets literally 30 seconds after the free agency period opens.

The biggest tampering issue is obviously player to player recruitment, but how on earth can you stop that? Players go to dinner and hang out all the time, and when the most notable recruiter, LeBron James, is involved you think the league is going to crack down on it? While he plays for a premiere franchise? No chance. So what should they do?

Just make it officially legal. Welcome to the free market. You can tamper your dick off if you want, but just know everyone on your roster is also at risk. I say release all the receipts. The NBA will allow you to text/email all you want, but it has to be submitted through the league and put out on the internet for us all to see. I say embrace it instead of trying to shut it down. I get the frustration if you’re a small market team and you don’t want to lose your best player, but that’s life in the big city. If you think your franchise guy is at risk of bolting in free agency, be an adult and trade him before he gets there. OKC didn’t have to trade Paul George, but they realized it was an opportunity to unload. Everyone in NO knew AD and LeBron were tampering, so they traded him a year early and got a nice return.

So while Adam Silver has to do “something”, we all know the deal. He knows that with tampering comes people talking about his league 24/7 and that’s good for everyone. But anyone who thinks there is any legislation or rules that will prevent a GM from sending a 3am “you up?” text to a soon to be free agent is kidding themselves.