Back for Week 4. We’ve had a good start to the season. 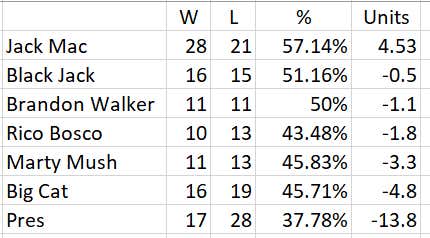 These picks are taken from blogs, Walk The Line, Unnecessary Roughness, tweets, and Pick Em Pod. I declared I’d have best record, percentage and units wise at the end of the season before week 1, hence why I am tracking everybody else.

I’m excited about this game. It won’t get the juices flowing for the pedestrian college football fan, but I find this game intriguing.

This may be Tulane’s biggest home game in ages. National TV. Night game. Playing a conference power. Tulane comes in 2-1 and if they win this game, they’ll be in a great division to win the West division in the AAC (a game @ Memphis in October will be tough, but they better win this one).

Tonight’s game will be both Houston & Tulane’s first conference game. Houston put up a good fight against Wazzu last week and comes in 1-2. I was impressed by their defense last Friday, allowing only 31 points to Wazzu, which is a top 15 offense according to FEI (6th) & SP+ (12th). The biggest accomplishment came on the ground, allowing only 49 yards on 19 attempts to the Cougars. That will be key against Tulane tonight. Tulane is running at a clip of 5.95 yards per carry, which is impressive considering they’ve played Auburn. Houston will force them to throw tonight, where they average just 5.6 yards per pass. If Tulane is going to win this game, they’re going to have to run the ball at a clip above 6 yards per rush. Can they do it? Sure, but I’m betting they can’t.

I, also, believe that Houston will be able to put up points. I’ve been a believer in Dana Holgorsen all season with D’Eriq King. It’s treated us well, 2-0 ATS. Houston is a top 25 offense and Tulane ranks 61st in defensive efficiency according to FPI.

4.5 points is too many. I’m going against the line movement (line opened at -3 Tulane), but I’m fine with it. Give me Houston tonight and hopefully, we’ll start week 4 on a positive note.