I can’t believe it’s been over three-and-a-half years since me and the Whitdog started a hockey podcast that dropped on Soundcloud and was promoted on Twitter. After using a generic name for a few eps, we went with Spittin’ Chiclets. Then I realized we’d need a logo going forward.

I’m lucky I can draw a bath but I had a simple concept so I put pen to paper and came up with this beauty. 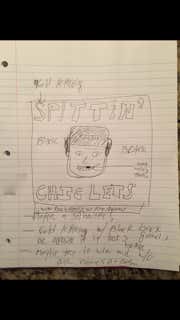 I sent it over to an artist buddy and he turned it into the logo you see today.

Next, Grinnelli shot his shot and became our producer. Not long after, Dave reached out after listening to an ep or two and said he wanted Spittin’ Chiclets to join Barstool’s burgeoning podcast network. Obviously, we said yes. Eventually we asked a hugely popular and hysterical guest if he wanted to become part of the crew. We weren’t looking to add anybody but realized that Biz had a certain Jenny Say Kwa that could take the show to another level. And the rest is history.

Now, you can own an early piece of that history by wearing the equivalent of Spittin’ Chiclets cave drawings and have people go blind trying to read my chicken scratch. This is a limited edition t-shirt to show off your Chiclets fandom as well as some atrocious artwork.