As brought to our attention by the popular military culture site US Army WTF Moments, an aviation unit is having a serious problem with pigeons roosting in their hangars, and have decided to take matters into their own hands the tactical way… with airsoft guns. Below is the actual notice that went out to the unit (and in the parentheses I tried my best to interpret what I think some of the military jargon means).

The AME (aircraft maintenance engineers??) cell has authorized use of AIRSOFT WEAPONS to deal with our Pigeon problem. As always, there are some ground rules.

1. Only pigeons at the far end of the hangars are fair game.

2. There will be no aircraft in the half of the hangar where the shooting is. Chinook side or Blackhawk side must be empty. (Please for the love of God, don’t shoot our fucking helicopters.)

3. Only plastic ammo is authorized. (I know one of you idiots will come in here with the wrong kind BB gun & ding our stuff with metal BBs.)

4. ALL ammo must be accounted for. NO FOD LEFT BEHIND. (FOD = foreign object or debris.)

5. Weapon safety and PPE is mandatory (EYE PRO). No shooting at each other. Don’t be the person that screws this up for everyone. (Someone will absolutely screw this up but don’t let it be you.)

6. Weapon and ammo are on you to buy.

Happy hunting, and as always be safe.

POC CWO5 Pigeon McKillington III (Point of contact, Chief Warrant Officer 5) (Ok, I made that last name up but it was blacked out on the one I saw.)

And though it seems ridiculous this can actually be a huge problem. When birds like pigeons roost in the rafters of these hangars they can drop bird crap, feathers, bits of nest & other junk onto the floors & on the aircraft. This can cause serious malfunctions if debris gets into engine parts, and the crap can actually damage paint jobs and make floors slippery. Imagine getting discharged from the Army because you slipped in pigeon shit… I can 100% see that happening to someone like me. On top of that, birds have also been known to build nests in air intakes & exhaust systems. Not great.

So I have to say, I understand the CWO5’s decision to declare war on these feathered critters. And I have no doubt the younger enlisted of the unit will rise to the occasion with a ridiculous amount of enthusiasm. As soon as they read this memo I imagine every PFC immediately going online to buy an airsoft gun & ammo.

No word yet on if PETA has gotten involved to save the birds, but if they snuck on base I imagine their camouflage would be something like this:

Best of luck to this aviation unit as they deal with a military coo. 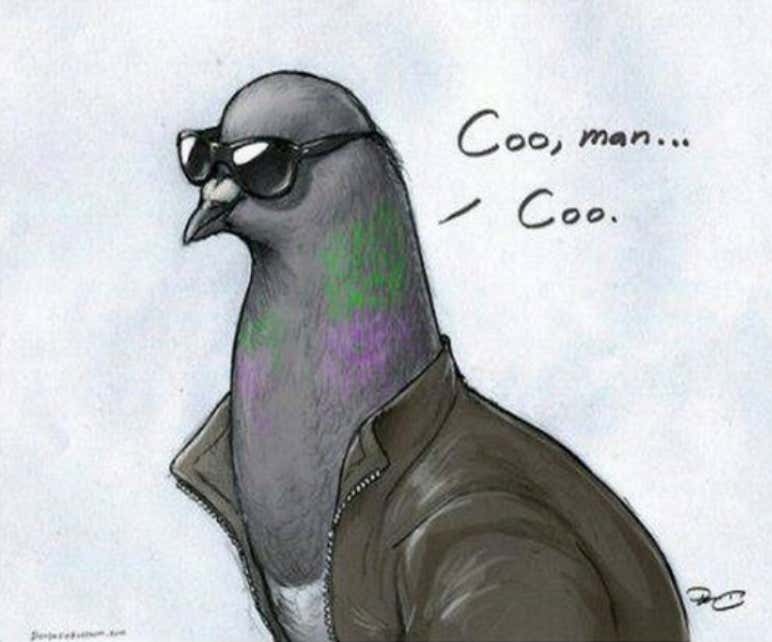 You can hear more about it on today’s episode of ZeroBlog30. It’s our 200th so give us a listen and/or ‘like & subscribe’ on iTunes!! In this episode we also talk about a Marine tackling two high school students into oblivion, the DoD crackdown on vaping, and more.